Kohl's (KSS) was last reviewed by me in early July, where I wrote that "KSS is pulling back and could return to its breakout point around $65. If support does not develop around $65 then a deeper decline could materialize."

KSS weakened into the middle of July and then made a zigzag higher to retest the June high. Prices are lower in early trading action Tuesday. Let's check the charts again to see if this is a rally failure or a pullback to buy.

In the daily bar chart of Action Alerts PLUS holding KSS, below, we can see that the stock has been in a three-month consolidation pattern. Prices are above the rising/flattening 50-day moving average line. The 200-day moving average line is rising and bullish. The volume has slowed from late May to early August but it has picked up recently as prices have approached $80.

The daily On-Balance-Volume (OBV) line has been improving from the middle of July and is poised to make a new high for the move up. The Moving Average Convergence Divergence (MACD) oscillator has turned up to a fresh outright go long signal from above the zero line.

In the weekly bar chart for KSS, below, we can see prices above the rising 40-week moving average line. The weekly OBV line has a positive slant and the weekly MACD oscillator is poised to turn up to a fresh go long signal.

In this Point and Figure chart of KSS, below, we can see that a trade at $79.84 will be a breakout from a small double-top pattern and a trade at $80.63 will be another breakout. A potential upside target is $96.54. 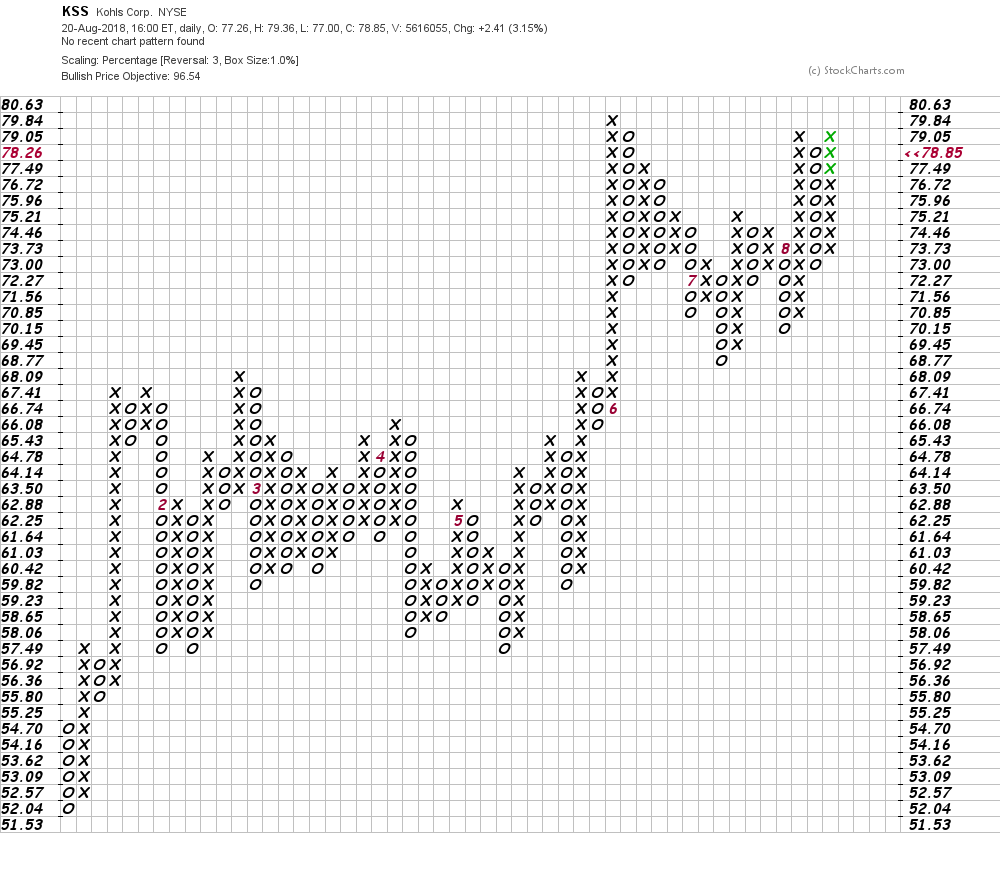 Get an email alert each time I write an article for Real Money. Click the "+Follow" next to my byline to this article.
TAGS: Investing | U.S. Equity | Consumer Discretionary | Earnings | Jim Cramer