Riddle Me This, Batman

March 9, 2009. The S&P 500 bottoms out at triple sixes. Unemployment levels scream. Hope plummets. Even with absurd levels of stimulative monetary policy at the economy's back, the next time GDP hits 3% for an entire year will be the first time since 2005. I don't like placing quantifiable numbers on things like corrections, or bear markets. Really, do levels like 10% or 20% mean a thing, or is one's financial behavior under duress really all that matters?

That said, the financial media will celebrate the longest bull market in history this week. Barring wild moves, the S&P 500 will make news either today or tomorrow. The truth is that even by the media's own quantifiable metrics, they will be mistaken. Never mind that we have seen tough markets along the way -- namely 2011, 2015, and 2016.

Today, the bull market, measured from the low of March 9, 2009, will turn 3,452 days old. That will tie the record set from October 1990 (Year of the Reds) through March 2000 (Subway Series). By the way, we still traded stocks in Spanish pieces of eight back then. The problem is this. If you measure this bull market from its low, which we did not know was the low at the time, then you cannot extend this bull until the January high of 2872 is pierced to the upside. Got it? For (just supposing) if the S&P 500 goes on to drop 20% or more before ever eclipsing that level, the bear market would be then be measured from January, would it not?

I know that it seems unlikely with our equity market's broadest large-cap index having closed at 2857 last night. We are talking about 15 points. Earnings are robust, and expected to remains so. The economy is growing at the fastest pace in four years, and is supported by both tax cuts and deregulation. This 2018 economy has a serious shot at breaking 2017's post-2005 record growth of 2.85%.

Taping On The Foil

Still, to put this one in the books, we need a new high. Fair enough? What will ultimately end this party? The smart money is guessing it will be policy error. Trade wars are a threat, but the U.S. is home to a more self-sustaining economy, if need be, than are its global competitors. The fact that the economy and markets are growing in the first rising interest rate environment experienced in a generation is remarkable. Should the FOMC continue on this path of raising short-term interest rates while trying to draw down the balance sheet, eventually, the 2/10 curve will invert, and the U.S. dollar will become too powerful.

I know we focus on the just-mentioned 2yr/10yr spread. That one is down to 23/24 basis points as I bang out this note. Has anyone taken a gander at the 3-month/30-year spread? That should scare the stuffing out of you. 93/94 basis points. Yeeeeah. Nothing wrong with that. Less than one percent difference. Hmm. What that tells the good folks of Gotham is that the bond market is not buying into the whole inflation/growth story for the long term. Oh, did I make you sad? No need for that. I still think that we will have a late-year rally based on positive headlines coupled with significant earnings growth this year -- unless power shifts in November. Right or wrong, either way, you're going to have to button down your jersey and tape on the foil.

Faster Than A Speeding Bullet

Best bet from here? Many of the semiconductors have been beaten down. The cyclical nature of boom/bust for the memory names claws at investors. Not to mention, the high levels of exposure to China for the whole group. Then there's the defense and aerospace industry. Unloved. One stupid planetary mistake, not to mention expanded budgets could easily put this group back in the lead. You have seen these hypersonic weapons that move at five times the speed of sound, haven't you?

The Russians and the Chinese certainly have. In fact, the perception is that the U.S. may be behind in this race. Just so you know, five times the speed of sound means that nothing we currently have can intercept these weapons. Lockheed Martin (LMT) has been winning the contract work in this space, while Raytheon (RTN) seems to be working on intercepting these weapons. Boeing (BA) and Northrop Grumman (NOC) are also known to have bid on these projects, and have at least begun this kind of work.

Think defense spending is superfluous? Then you might be okay with the idea of our adversaries being able to deliver large-scale destruction at speeds that render us helpless. I continue to like Raytheon. That said, the Air Force has consistently chosen Lockheed for this work, and the name is currently trading at a point of regular resistance. 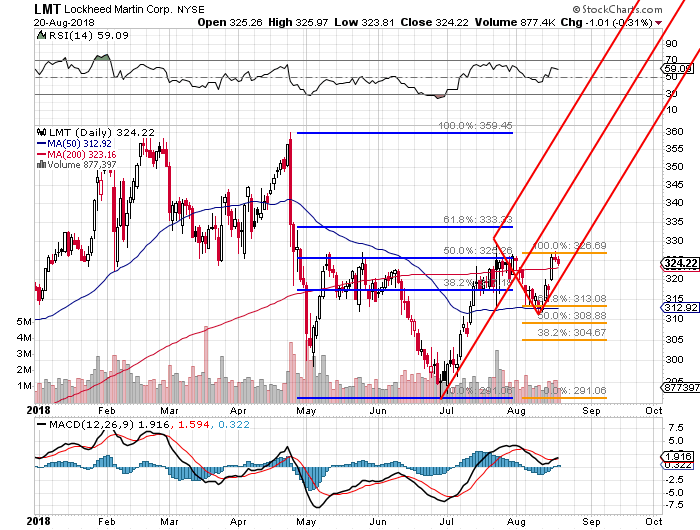 I understand that trade concerns have hit all of the industrials. One must also understand that a stronger dollar turns into lower input costs. This could very well turn into upward margin surprises going forward for a high-priced industry selling equipment to folks who feel that they need it.

Since the April defense industry meltdown, Lockheed Martin, purveyor of both the F-35 and F-22 fighter aircraft, has bumped into a wall at roughly the same spot where the stock now stands. One quickly notices this area as a 50% retracement of that precipitous fall in April. The name also found help at a 50% retracemnt of the more minor August selloff. The Pitchfork that seems to be possibly setting up is a little steep. I would be pleasantly surprised if this year's highs were reached by October, but by December? That's a lot more realistic.

I am not going to change my price target for this name just yet. My target remains $333, and I will take some off there. However, there is definitely a case to be made for $360. I will certainly hold out a slice of my long position in the hopes that the drive toward hypersonic weaponry takes this stock much higher.

LMT will report third-quarter earnings on October 22. Those looking to purchase at a discount or simply drag in some revenue if all goes well might look at October 19 put options bearing strikes at recent points of support.

Wall Street did not seem pleased at first with the appointment of Calvin McDonald as the new CEO at Lululemon (LULU) . The shares plummeted in late July, bottoming out around $117. Well, not only are the shares back, they look like they're breaking out. Yesterday, we saw Buckingham Research raise their target price from $110 to $130. Impressive for a research firm to flip from a downside target to an upside one overnight. Then came JP Morgan. The firm lifted their target from a pedestrian $133 to a far more aggressive $146. Huzzah.

The bank's Matthew Brinkman is seeing strength for LULU across both North America and Asia. He also expects the firm to raise annual guidance when it reports a week from this Thursday. All I know is that this stock was up 5% yesterday, and is up some 70% since March. This is a beast that I missed. What can I do now? Let's pop the hood, and take a look. 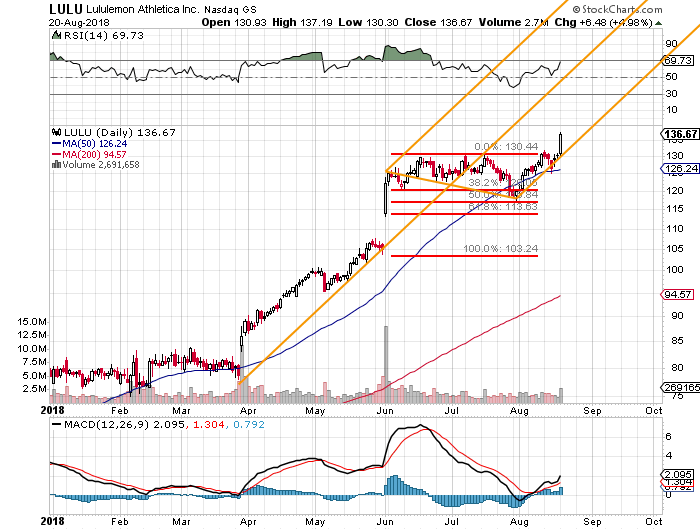 This year has been a strange one for this stock, really segmented so far into three different "eras." Three months of straight sideways, then an upside break followed by a two-month steady climb. Then another violent upside break, this one followed by another ten weeks of sideways. By the way, both of these upside breaks were provoked by earnings releases that came bearing significant revenue growth.

The name appears expensive, trading at 36x next years earnings. They also don't pay you anything to own the shares. You own these shares for two reasons. The consumer is hot, and this is what the consumer is buying.

Two key items here for me. Profit margins seem to have grown significantly into 2018 from 2017. On top of that, they also appear to have their balance sheet under control. The firm runs with a Quick Ratio of 3.7, which is truly astounding for a firm that one would think is forced to carry on day to day operations with huge inventories in house.

I don't chase equities that are up 70% before I get in. I may be wrong, but this prevents me from being extremely wrong. This is what a trader could do to get long-side exposure in an intelligent way (minimal lots).

3) If you think the shares return to the previous channel... Sell one August 31 120 put (last $1.25). This poses, by far, the least risk among these three choices. You either pocket $125, or you own them at a net basis of $118.75, nearly 18 bucks below last night's close. I am pretty sure that I'll choose door number three. Just not sure if I choose more than one door.