We haven't reviewed the charts and indicators of Bed Bath & Beyond, Inc. (BBBY) for some time now. Unfortunately, the charts have not improved in the past year and prices have nearly been cut in half since early 2016.

This despite a lot of share buybacks, as Jim Cramer pointed out in his article on Monday morning.

Despite these low share prices for BBBY, we are not getting more than the potential for a bounce, as opposed to a sustained advance when we look at our favorite indicators. Let's go up and down the aisle with the charts and indicators to see if any bargains jump off the shelves.

In this daily bar chart of BBBY, above, we can see how prices have weakened in the past 12 months. BBBY has spent most of its time below the declining 50-day moving average line, as well as the declining 200-day line.

There are two volume spikes that are worth mentioning. In June, there is a downside price gap with heavy volume and the On-Balance-Volume (OBV) line sank to a new low for the move down since December.

There is even heavier volume seen in late July. No price gap, but prices and the OBV line both turn higher. From July to now, there is a bullish divergence between the lower lows in price and the higher lows from the momentum study. The jump up in the OBV line and the bullish divergence may be some early foreshadowing of a turnaround, but let's look further.

In this weekly bar chart of BBBY, above, we can see that prices have spent most of the past three years below the declining 40-week moving average line.

The weekly OBV line has been in a downward slope for three years, with a recent "hiccup." The weekly Moving Average Convergence Divergence (MACD) oscillator is still well below the zero line, but could narrow towards a cover shorts buy signal in the weeks ahead. 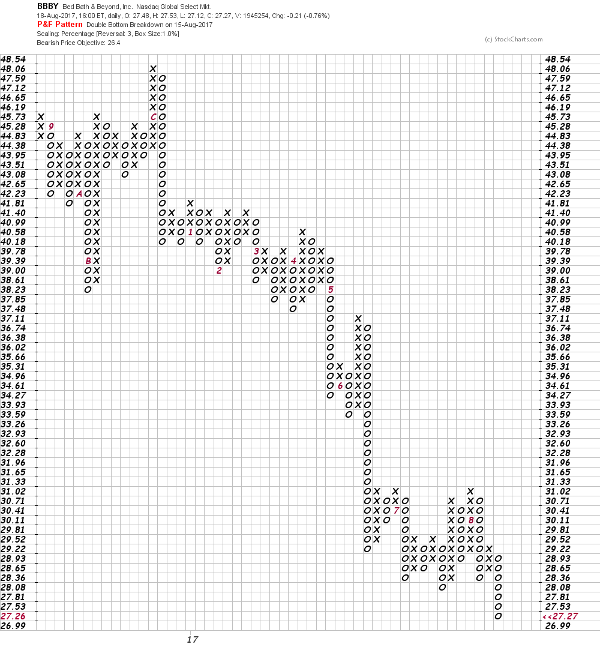 In this Point and Figure chart, above, we can see the long move lower for BBBY and a slightly lower price objective around $26. Even if BBBY had reached this price target, the real problem with this chart is we do not have any signs of accumulation and the $28.50-$31.00 area will likely act as resistance.

Bottom line: even if the worst of the decline for BBBY is behind us, the stock needs a long period of base building. I am not a fan of bottom picking.

Get an email alert each time I write an article for Real Money. Click the "+Follow" next to my byline to this article.
TAGS: Investing | U.S. Equity | Consumer Discretionary | Consumer Staples