This morning, Estee Lauder Cos. (EL) gapped sharply higher after reporting earnings for its fourth quarter. The company beat expectations for earnings and revenue, but then lowered guidance on both for the current quarter.

Estee Lauder shot about 6% higher on the news, but then quickly surrendered about half of its gains. Clearly, some investors sold into this morning's pop. Was selling into strength the right move, or are those investors about to miss out on greater gains? Let's go to Estee Lauder's charts to find out, starting with the weekly chart.

When a stock performs as well as this one, there's always a concern that it's gotten ahead of itself. That concern may be reflected in Estee Lauder's potential weekly double top pattern (semicircles).

The emphasis here is on potential, because this asymmetrical version of the bearish pattern never resulted in a breakdown. Instead, Estee Lauder found support (shaded yellow) on its 50-week moving average (blue). According to this time frame, the stock's uptrend remains intact. 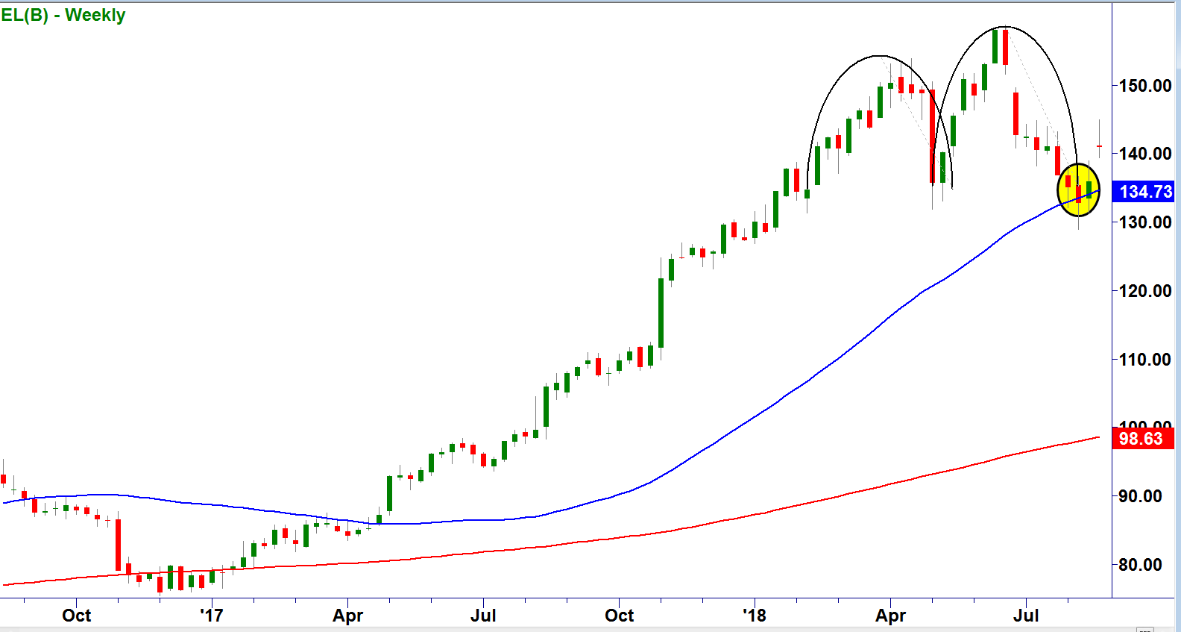 Now let's zoom in to Estee Lauder's daily chart. In the short run, the picture here is somewhat less bullish. The stock did manage to gap above its 200-day moving average (red), but remains beneath its 50-day moving average (blue). Those two moving averages could cross in the near future, which would indicate that sellers are gaining momentum. 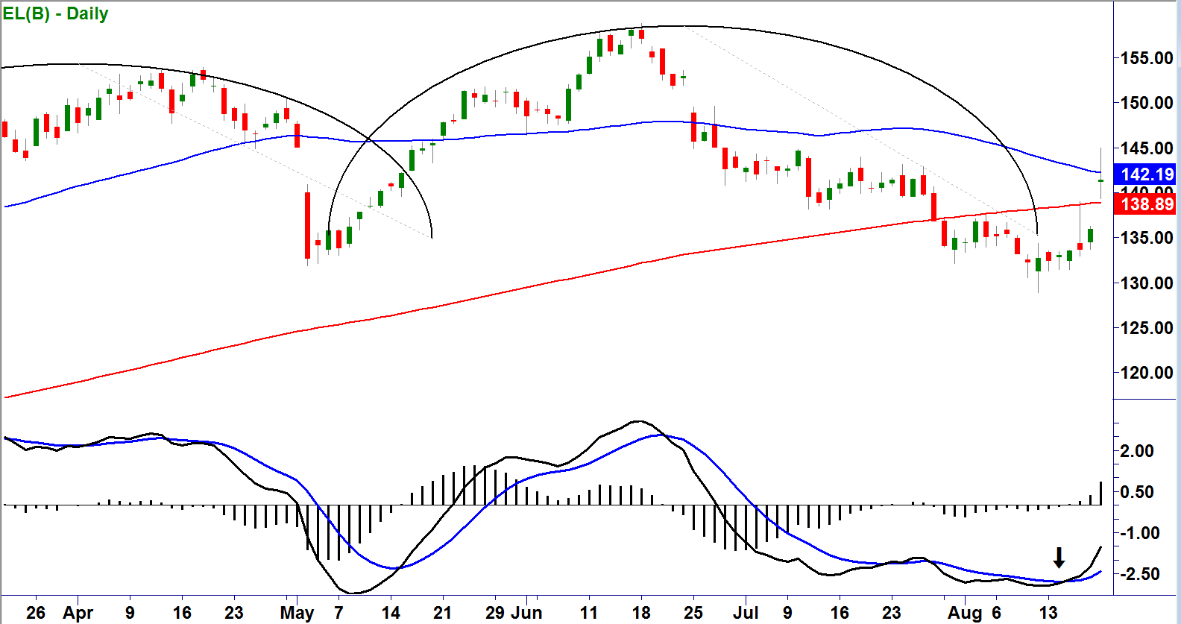 Estee Lauder is best known for cosmetics, but the company is racking up gains like a tech stock. Last year, the stock climbed by 66.35%, and it's tacked on an additional 10.5% year-to-date. It's a consumer-oriented stock that at times behaves like a momentum stock.

Here's how I'll play it: we can buy Estee Lauder at its current price, with the understanding that we'll get out if the price drops below $130.

That's a risk of less than 8% of the stock's current price. However, the potential upside is far greater.

If Estee Lauder can break above its all-time closing high of $158, there's no telling how far it could run. If it reaches but fails to break that key level, we're still looking at a gain of over 12%. In this case, the reward outweighs the risk if we manage that risk properly.

(Ed Ponsi's commentary originally appeared on Real Money Pro at 8:20 p.m. ET on Aug. 20. Click here to learn about this dynamic market information service for active traders and to receive Doug Kass's Daily Diary and columns from Paul Price, Bret Jensen and others.)

For more on Estee Lauder, today's Chart of the Day, see:

Why Pay a Premium for Estee Lauder?

Get an email alert each time I write an article for Real Money. Click the "+Follow" next to my byline to this article.
TAGS: Investing | U.S. Equity | Earnings | Consumer | Options | Stocks

It's Not Too Late to Get Long or Re-Enter Adobe

The trick is doing so intelligently.

I think I just take a walk and whistle on by ORCL without getting involved.

For traders, I have some food for thought.

CrowdStrike Is Hot But Very Expensive, Here's How to Trade It

I already have shown favor to and own Zscaler, which is also an overvalued cybersecurity name, though not quite as overvalued as CRWD.