Down markets, like we've experienced over the past week or so, create opportunities. Top quality merchandise goes on sale simply because traders are feeling anxious.

Cognizant Technology Solutions (CTSH) is a perfect example of this type of play. Just months ago CTSH established an all-time high of $85.10. It then reported excellent numbers for both its March and June quarters.

Few companies can match CTSH's long-term track record. The company garners Value Line's highest rating for financial strength and ranks in the top 1% of all firms in terms of earnings predictability. Its shares have outperformed 85% of all 1700 stocks covered in Value Line's main research universe.

Typically, stats like that would make a stock unusually expensive. Cognizant, though, now trades near the low end of its normal valuation range.

How is that possible?

CTSH moved up close to 390% over the previous decade yet that monster gain did not fully reflect the stock's vastly improved fundamentals. Total return of 386% paled in comparison to a 528% boost in EPS. 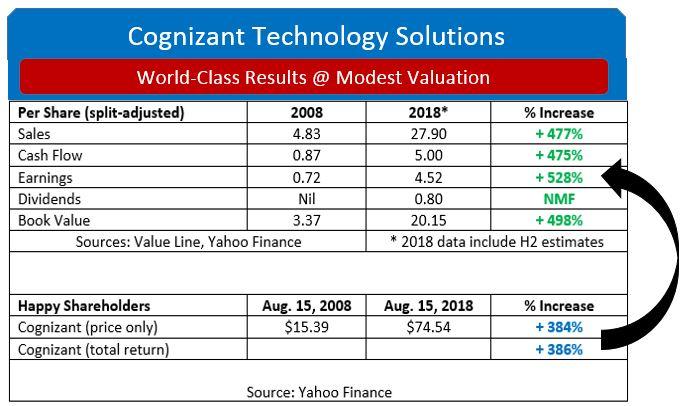 The stock's five previous "best entry points" (green-starred below) exhibited valuations quite similar to today's. The stock's three most recent "should have sold" moments (red-starred) only kicked in when CTSH commanded 21x to 29x current year's earnings.

A simple regression-to-the-mean multiple supports an 18-month target price of at least $101 per share. That implies upside of at least 35% on this fabulous, low-risk play. 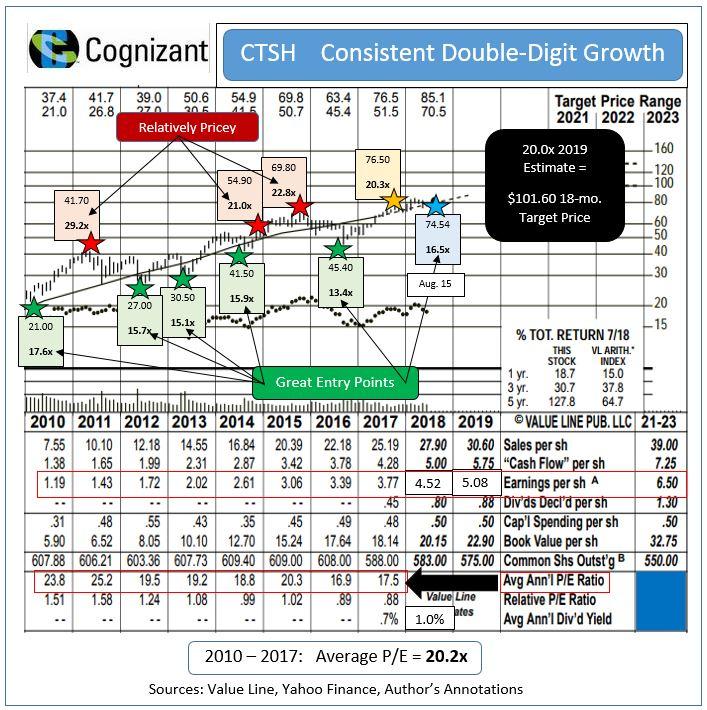 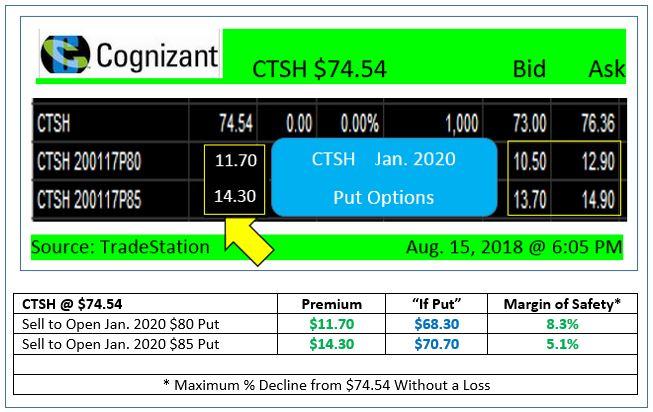 Owning Cognizant at $68.30 would mean entering the trade at around 13.5x next year's estimate. Even the more aggressive $85 put's break-even point of $70.70 represents just 13.9x the firm's 2019 projection.There was just one time, during the past 8.5-years, when CTSH was available that reasonably. The pre-election plunge of 2016, gave traders a shot at owning below $46, about 13.4x that year's profits. Thirteen months later CTSH had rebounded to $76.50.Cognizant is a proven wealth creator. Don't miss your chance to own it on a market-related, rather than company specific, pullback.

Buy some shares, sell some puts or consider doing both.

This column originally appeared on Aug. 17 on Real Money Pro, our premium site for Wall Street professionals. Click here to get great columns like this even earlier in the trading day.

Look in the Basement for Bargains, If You Dare

The ranks of companies trading below NCAV has been somewhat barren for a while, but you never know what you'll discover 'down there.'

The best indicator of a tradable bounce is when stocks stop going down on bad news.