The accounts of the European Central Bank's (ECB) latest monetary policy meeting published on Thursday afternoon showed that Governing Council members discussed the euro's exchange rate. But investors counting on a depreciation of the single European currency could be disappointed.

Political uncertainty in the eurozone in the first half of the year that was due mainly to the Dutch and French elections has dissipated, allowing the euro to strengthen since May. After declaring that the financing conditions for households and businesses remained "very favorable" across the eurozone and patting themselves on the back because "sovereign and corporate bond spreads had been notably resilient to the repricing of the risk-free curve and had in fact tightened somewhat," the ECB officials also admitted this:

"At the same time, concerns were expressed about a possible overshooting in the repricing by financial markets, notably the foreign exchange markets, in the future. It was underlined that the still-favorable financing conditions could not be taken for granted and relied to a considerable extent on a continued high degree of monetary policy accommodation."

The euro initially sold off after this, touching a low of $1.1661 on Thursday afternoon in London, but then recovered. The reality is that the above paragraph does not suggest the ECB policymakers are worried about the current exchange rate, nor does it indicate a future level of the exchange rate that would make them uneasy.

If anything, the shifts in the dynamics of economic growth in the eurozone suggest that the euro has more room to appreciate now than it did a few years ago. Since the beginning of 2013, the contribution of household expenditures to eurozone GDP has been increasing while that of exports has been decreasing, according to data from Eurostat. 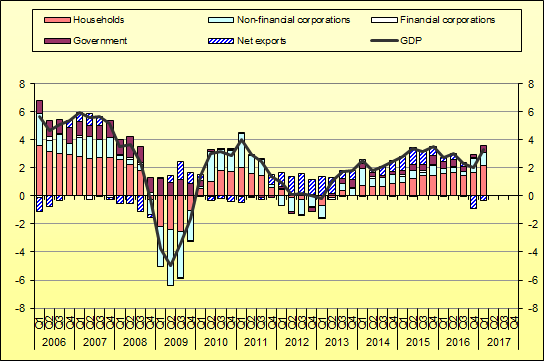 The data show that the ECB can be more relaxed now if the euro strengthens than a few quarters ago, because the euro area's economy is more dependent on domestic consumption than on exports. This means that GDP growth actually might benefit, rather than suffer, from a stronger euro.

A stronger euro also will lower inflation and could give further impetus to the ECB's asset purchases. Some journalists and analysts noted that the central bank has favored some member states -- notably Italy -- in July by purchasing more of their bonds.

In doing so, the ECB has deviated from the "capital key" -- the principle that ensures the central bank purchases bonds in proportion to countries' economies and thus prevents the use of asset purchases to prop up weaker eurozone members. I wrote a story last year in March in which I mentioned the possibility of the ECB dropping the capital key.

The accounts say: "At the same time, it was underscored that the asset purchase program would continue to be a key instrument if the Governing Council assessed the sustained adjustment of inflation to be at risk, while the use of other instruments, within the ECB's mandate, could not be ruled out. In this context, it was also suggested that the stock versus flow effects of asset purchases be considered."

That last bit of jargon could turn out to be very important. It seems to suggest that the Governing Council members are in favor of looking at asset purchases in a wider context than the narrow, restrictive "capital key" allows. Looking at flows, not just the stock of bond purchases implies a less-rigid approach.

In other words, the ECB might be getting closer to dropping the "capital key" altogether. Could targeted asset purchases be next on the menu for the eurozone?

Get an email alert each time I write an article for Real Money. Click the "+Follow" next to my byline to this article.
TAGS: Currencies | Markets | Rates and Bonds | Financial Services | Investing | Economy | FOREX | How-to | Risk Management