Dick's Sporting Goods Inc. (DKS) had an unforced error the other day, or what technical analysts call a downside price gap. This bearish gap or price void was not the first one to hit the retailer, and prices have been in a downtrend since late last year. Let's check the charts and indicators to see if there is any reason to catch a falling golf club (apologies to all the knives out there).

In this daily bar chart of DKS, below, we can see that prices have been trending lower the past 12 months. DKS has spent most of the time below the declining 50-day moving average line. The daily On-Balance-Volume (OBV) line has been trending lower since November and tells us that sellers of DKS have been more aggressive than the buyers. In the lower panel is the 12-day momentum study, which does not show a bullish divergence or a slowing of the downtrend. Typically, before a stock bottoms its rate of decline will slow as investors buy on a scale down.

In this weekly chart of DKS, below, we went back 10 years to show both the topping pattern since 2014 and to look for possible support. From 2014 DKS made a large broadening pattern that became a reversal pattern (some broadening patterns are continuation patterns). The weekly OBV line has been declining since late 2016 and there is no bullish divergence on this time frame with the 12-week momentum indicator.

In this adjusted Point and Figure chart of DKS, below, we can see a large distribution pattern and the long decline that broke the $34.23 low. Prices are now at the lower end of an older (2011/2012) support area and further declines are possible. 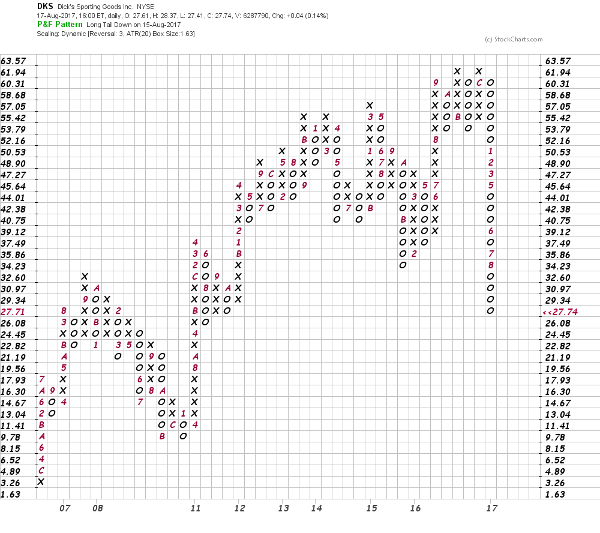 Get an email alert each time I write an article for Real Money. Click the "+Follow" next to my byline to this article.
TAGS: Investing | U.S. Equity | Consumer Discretionary | How-to | Gaming | Risk Management | Stocks