These little yellow bugs were all over us. No idea what the heck they were. They kept stinging us and it kind of hurt. Not a lot, but enough to distract. Just glad that they weren't killer bees. It was still daylight, which still kind of dark out in the rain forest. Then, a deep guttural roar like I had never heard seemed to tear a hole through the forest canopy and grab me by the rib-cage. We were moving toward the direction of the sound. I was in charge. Lucky me. A 21 year old corporal. I looked at who I considered to be my toughest guy. He was visibly shaken. Then we heard it again. Everyone started laughing, almost uncontrollably. For most of us, it was our first day out in the rain forest. Our first jungle patrol. What could possibly go wrong?

Markets seem to have no memory from one day to the next. That's something often inferred by my colleague Doug Kass. Sometimes it feels to me like it's hour to hour. We've gone over this week in detail, as have so many others.

Dollar strength has been a significant weight upon financial markets. A Chinese economy showing signs of a rapid slow-down, a threat to global growth became yet another. President Xi, thought to be setting up for the long game against President Trump, might possibly be put in the position of trying to show progress on trade ahead of his nation's Q3 GDP report on October 15. Is that the race?

The Chinese Commerce Ministry reaches out, and accepts the U.S. Treasury Department's long-standing invitation to come to Washington to talk. Maybe it's that October date that they are up against, maybe it's the imposition of the next tranche of tariffs expected to hit $200 billion worth of Chinese exports to the U.S. that the Chinese would like to avoid. Either way, the two sides will meet next week, on Wednesday and Thursday.

What Could Possibly Go Wrong?

We well know what the U.S. needs to see. More balance on tariffs, protection for both U.S. intellectual properties as well as key technologies, a less-manipulated Chinese currency. The White House has made clear that the Chinese should come with concrete proposals. The delegation is still coming. That is truly a positive development.

Earnings are winding down. The domestic economic calendar is light next week as well. Though Robert Lighthizer has been aiming at putting together a new NAFTA deal by the end of this month, with the Mexican delegation in Washington, President Trump has indicated that there is no rush.

As long as these trade issues remain future news items, there will be days, or hours, where markets find reasons to be optimistic, or pessimistic. This will go back and forth until the news hardens. And that reminds, me -- the Kansas City Fed's annual Economic Symposium at Jackson Hole is set for next week, starting on Thursday. Fed Chair Jerome Powell is scheduled to speak on Day One on monetary policy in a changing economy. Again, what could possibly go wrong? Which brings me back to my intro. That roar we heard that day was a howler monkey. We were on their turf, and the monkeys tried to intimidate us. They were very loud, threw a lot of debris around, but ultimately they were harmless. Let's hope for the same from Jackson Hole.

Both Fluke and Flounder are flat, bottom dwelling fish that live in the waters off Long Island. For those of you who like to get out there and fish these waters, these are fish that make for good eating, and generally speaking, are just not equipped to put up much of a fight.

General Electric (GE) is another bottom dweller that seems ill equipped to put up much of a fight. That's not a shot at CEO John Flannery. I think he is digging in and putting up a tremendous effort to save a firm left to him in a horrendous position. The stock though... (shaking my head). The stock's performance would look at the term "flat" as a serious positive. I am long General Electric. I hate being long General Electric. Bottom fishing is not the sport that it's made out to be. Even at these current prices -- the stock closed at $12.30 on Thursday, after trading as low as 11.94 (a nine-year low!) on Wednesday -- I am not likely to add to this position.

Two years ago, after Warren Buffett's Berkshire Hathaway (BRK.B) made its exit from the name, I got in. Hey, big seller out of the way. What could possibly go wrong? Well, I spent about a year and a half managing that position. I did get out in May with my capital investment whole, but it took much of my time and energy. It also took adding a ton of risk in sports that I am comfortable with, such as the sale of both puts and calls, as well as coming close to overplaying my hand in sports that I don't like so much. It's called adding on weakness when you believe in a stock. It's called dollar cost averaging when you go for it on fourth down.

I am not even down on my current position. My equity stake has an average price of $13.16. I had driven my net basis as low as $11.44 through the writing of discounted puts. Then by adding longs on the call side, I actually took my basis up to $11.99. Truth is, I am just plain sick of this name, and sick of working, basically for free just to keep this one from hurting me.

Unwinding my derivative positions will drive my basis higher. I'm stuck for now. I won't be flat anytime soon, but I will lend you my analysis, if you'd like it. I imagine some of you might be long this sickly name with the "re-emerging" dividend yield of 3.9%.

When you were a kid, there's chance that your mom bought you and your sister some lemons, and maybe some napkins. You guys used her sugar. You sold the lemonade out on the sidewalk for 5 cents a glass. A few neighbors stopped by. You and your sister evenly split revenue of maybe 50 cents. The whole thing probably cost your Mom a few bucks. Nice trade.

That's what GE is doing with its power conversion unit. Last week, it was reported that Flannery might be looking to sell that unit, perhaps for as much as $3.2 billion. Firms such as Caterpillar (CAT) are mentioned as potential buyers. Immelt spent twice that much to purchase the unit himself back in 2011. Two days earlier, the firm announced that it was selling the energy debt financing business to Starwood Property Trust (STWD) .

GE continues to shed business units despite announcing that the $20 billion divestiture target had been substantially completed last month. Is the firm simpler and stronger as promised? Well, it's still a long way from simpler, and stronger is anybody's guess. The separation of the Baker Hughes (BHGE) oil services unit still lies in the future. 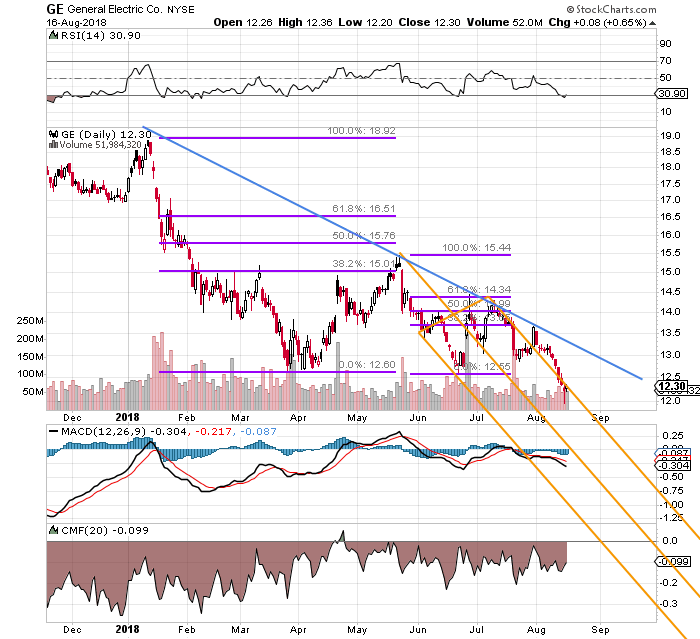 What you have here is a stock scraping along at nearly oversold conditions, with all three components of the daily MACD in negative territory, and Money Flow that looks like something out of the apocalypse. A series of lower highs is illustrated by the blue line. That line will be tough to crack. GE did try to break out of its downward-sloping Pitchfork in late July, but that effort appears to have failed miserably.

Wall Street's average Target Price for GE is $15.32. However, Stephen Tusa of JP Morgan, in my opinion, has been the most accurate analyst on this name. He has a sell rating on GE and a Wall Street low price target of $11. Obviously, only you know your tolerance for risk. Obviously, downside risk at this point is not what it once was.

If you can isolate this stock from the rest of your book, and not worry about it, then fine. If you are flat, look somewhere else for fun. My advice is that if you have the time and the energy to babysit this thing, you can probably pull this off. Know what you are getting into, though. There is no easy money to be made in this seemingly cheap name.

Last night, October 19 $11 puts went out at $0.16. GE reports the day prior. Hard to see any value in making that sale. Those long the equity might want to buy those puts though, just in case Tusa is being overly optimistic.

Get an email alert each time I write an article for Real Money. Click the "+Follow" next to my byline to this article.
TAGS: Investing | Global Equity | Industrials | Economic Data | Earnings | Markets | Consumer | Economy | Newsletter | Options | Politics