Match Group, Inc. (MTCH) was reviewed in February when I wrote that "MTCH is pointed up so the questions are where to buy it, what to risk and what price target? I would look to buy MTCH on a dip toward $40 if available. I would risk below $36 for now looking for gains to $44, $48 and then $50." MTCH reached most of our targets by April and rallied to our last price target of $50 last week. Let's review the charts and indicators to see how we want to proceed from here.

In this daily bar chart of MTCH, below, we can see an uptrend over the past twelve months. From February to early August we can see a large sideways consolidation pattern. Prices broke out above the April high and the pattern last week but have pulled back. The breakout and the pullback are a little troubling. First the heavy volume was seen on the gap higher but volume diminished when the April zenith was broken. Technicians like myself like to see heavy volume when prices breakout to new highs as this tells us that the rally has "legs". A breakout that lacks impressive volume is suspect. The daily On-Balance-Volume (OBV) line did move up to a new high but it has also made a peak. The Moving Average Convergence Divergence (MACD) oscillator moved above the zero line for an outright go long signal but it is narrowing (again) towards a possible downside crossover and take profits sell signal.

In this weekly bar chart of MTCH, below, we can see that MTCH has soared five-fold from its early 2016 lows. MTCH is above its rising 40-week moving average line. The weekly OBV has been in a sideways pattern the past six-months or so and needs to make a new all-time high to confirm the price gains. The weekly MACD oscillator is trying to cross to the upside for a fresh buy signal but is not clear right now.

In this Point and Figure chart of MTCH, below, we can see a longer-term potential price target of $83.33 but a decline to $45.73 is likely to weaken this chart. There was a lot of volume traded around $45.28 and weakness below that level could produce further selling. 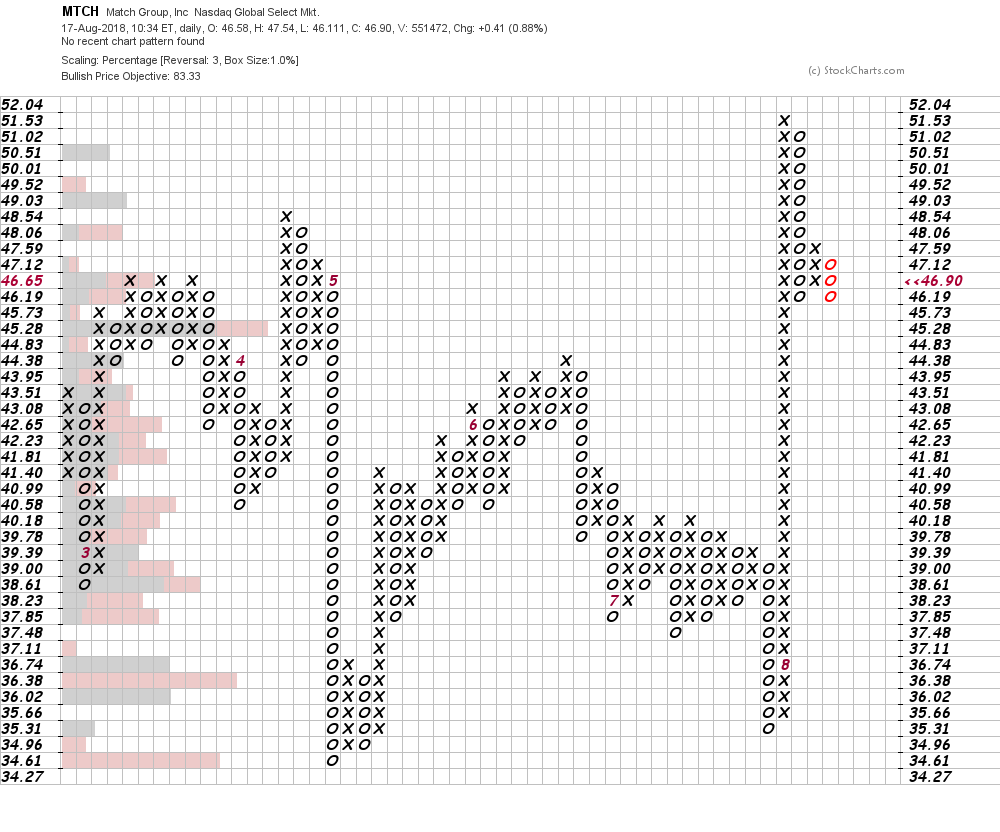 Bottom line strategy: I would stand aside from MTCH. I don't see strong technical evidence to probe the long side at this time.

Here's the GoDaddy Trade to Watch

Traders have to know not only if one of their holdings is reporting, but also if an influential name in the sector is reporting.

Where's the Market Headed Now? What the Charts and Data Reveal

Monday showed some signs of not just profit-taking, but some risk-off behavior by professional managers. What gives? Why now?