Thursday night on "Mad Money" our own Jim Cramer spoke with Nick Akins, chairman, president and CEO of American Electric Power (AEP) . This was part of his "Executive Decision" segment and Cramer called AEP his favorite utility. The fundamentals of the company were discussed so this morning let's check out the charts and indicators to round out the analysis.

In this daily bar chart of AEP, below, we can see a possible "lopsided double bottom pattern." There is a low in February near $63 and then another low in June just below $63. Prices rallied strongly from June into July and are now above the still declining 200-day moving average line.

AEP is above the rising 50-day average line and that shorter average is close to moving above the slower 200-day average for what is commonly called a golden cross. Some moving average followers use that crossover as a buy signal.

The daily On-Balance-Volume (OBV) line followed the price action and made lows in February/March and May/June. The rise in the OBV line since June has lifted the indicator above its April peak.

The trend-following Moving Average Convergence Divergence (MACD) oscillator is above the zero line and poised to follow prices higher.

In this weekly bar chart of AEP, below, we can see the double bottom and the rally above the declining 40-week moving average line.

The weekly OBV line shows a rise from June and that tells us that buyers of AEP have been more aggressive.

The weekly MACD oscillator is now above the zero line for an outright go long signal on this longer time frame.

In this Point and Figure chart of AEP, below, we can see an upside price target of $87.67. 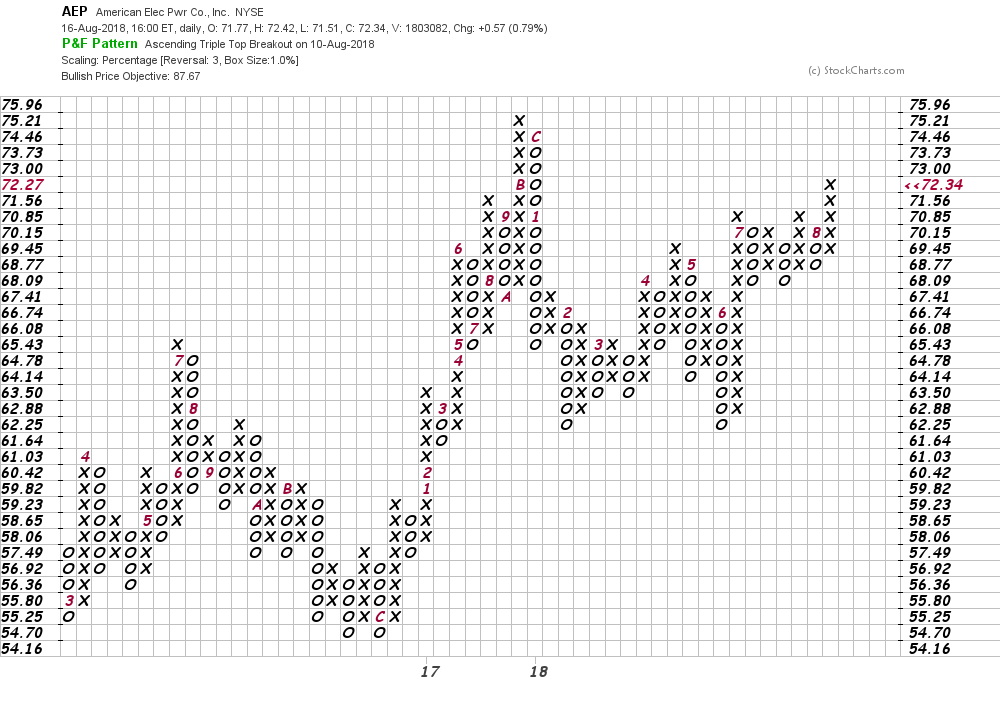 Bottom line strategy: Traders and investors can approach AEP from the long side risking below $68 while looking for gains to the upper $80's. Not bad along with an attractive dividend.

Get an email alert each time I write an article for Real Money. Click the "+Follow" next to my byline to this article.
TAGS: Investing | U.S. Equity | Energy | Mad Money | Stocks