We last reviewed the charts and indicators of TJX Cos. (TJX) a month ago, and we were not too enthusiastic. As we wrote at the time, "In this Point and Figure chart of TJX we can see there is a double bottom at $69, and break of those lows could open the way to further declines to the $58 area." We summed up our thoughts with this strategy: "TJX has bounced twice from the $69-$68 area. The third time TJX may not be so lucky. I would prepare for declines to $66-$64 and then the $58 area as the trend is still down."

With the benefit of some hindsight we can see that TJX did weaken to trade briefly below $67 and then firmed back toward the upper end of its July trading range. Prices finished the session on Wednesday above the declining 50-day moving average line after Tuesday's second-quarter earnings and revenue beat. Let's review our charts and indicators again this morning to see if TJX, which is part of Jim Cramer's Action Alerts PLUS charitable trust, can be an exception to the dismal performance of many traditional retailers.

In this daily bar chart of TJX, above, we can see the price and indicator improvement over the past few weeks. We note above that TJX had rallied above the declining 50-day moving average line. The slower-to-react 200-day moving average line has begun to flatten out after a decline. The daily On-Balance-Volume (OBV) line has been steady the past eight weeks, suggesting a shift from the decline seen in May and June. It looks like the selling pressure in May and June is over and traders are neutral now. A turn up in the OBV line would tell us that buyers of TJX had become more aggressive. There is a bullish divergence in June and July as momentum readings made higher lows in contrast to prices making lower lows -- the pace of the decline slowed, signaling a potential reversal.

In this weekly chart of TJX, above, we can see that prices are still below the declining 40-week moving average line. If TJX rallies to around $75 it might be rejected the first time up as that is the underside of the 40-week moving average line. Key moving averages can act as support lines or resistance lines, just like trend lines. The weekly OBV line held the lows of the past two years and the uptick in the line the past few weeks could be the start of sustainable upside move. The weekly Moving Average Convergence Divergence (MACD) oscillator is narrowing toward a possible bullish crossover from below the zero line. This signal would be a cover-shorts buy signal. 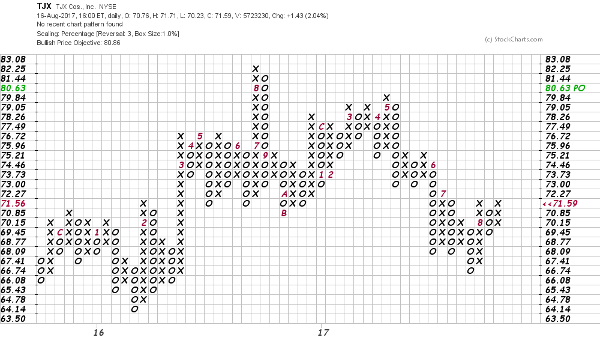 In this Point and Figure chart of TJX, above, we can see that a trade up at $72,27 would be an upside breakout and would open the way for a price target of around $81.

Bottom line: The charts and indicators of TJX have improved the past month. A close above $72 could set in motion further gains towards the 200-day moving average line around $75.

Get an email alert each time I write an article for Real Money. Click the "+Follow" next to my byline to this article.
TAGS: Investing | U.S. Equity | Consumer Discretionary | Earnings | How-to | Risk Management | Stocks