Perhaps the lion's share of market watchers started the week talking about the Turkish lira -- and the currency shock that collapsing emerging market valuations coupled with unsuccessful Brexit negotiations had placed financial markets in. This condition is true. However, by yesterday, it had become apparent to most that the badly stumbling Chinese economy, and the threat this poses to broad global growth, were as negative a force on the marketplace as any.

Really, all one has to do is glance at the entire commodity complex, priced in now-expensive U.S. dollars, for a clearly illustrated view. What commodity defines growth and demand for construction as much as does copper? The red metal, at Wednesday's lows, had taken a roughly 9% crowbar to the knee-caps, and stood about 20% below the late 2017 highs.

This simplified example is representative of the space more broadly. China has been the planet's engine for growth. Now, thanks to that nation's own organic debt-laden slowdown in conjunction with President Trump's strategy on trade, conditions are evolving that are putting intense upward pressure on the U.S. currency. Among those conditions are a U.S. central bank that continues to plan regular increases in the Fed Funds Rate, while attempting to ratchet up the balance sheet management program in October.

Bear Market In the Offing?

Not necessarily. Yes, I have told you many times that policy error on behalf of the Federal Reserve was the greatest threat to the preservation of the current bull run. That policy is not yet written in stone. Futures markets trading in Chicago are now pricing in a 96% probability of a late September rate hike, as well as a 70% chance of a December rate hike. At that point, the FOMC will take on a more-dovish composition. The central bank can always take a breather from balance sheet management, or from the gradual short term rate hikes. The latter might give the yield curve a much-needed respite. This crew is not a bunch of robots. Jerome Powell is sentient.

For now, there are a corps of trader/investor types that are running about calling for the sky to fall. I may take one on the chin. I don't know, but amid yesterday's mayhem, I net bought a lot more shares than I sold. I am not always right, and I play by a disciplined set of rules that aid in my personal attempt to keep my face from being ripped off, but there are several questions that I ask myself on a regular basis when I wonder if this is indeed the start of a bear market. Ask yourself...

Are equities overvalued? By some measures. To my thinking, however, an S&P 500 trading at 17.6x forward-looking P/E, a Dow Jones Industrial Average trading at 16.4x, and a tech-laden Nasdaq Composite trading at 21.1x are not cheap, but are certainly not overtly expensive. That said, a tightening of monetary policy would require contraction here.

Is consumer-level inflation impacting the economy? Not yet, it isn't. Certain measures of inflation are on the rise, as are input costs -- but as I just mentioned, the stronger dollar has put the whammy on commodities. This will suppress those input costs, and depress inflation expectations. This could also create some upside margin surprises for the third quarter. Huzzah.

Is the broader domestic economy under threat of recession? Simply put, not even close. True, current fiscal policy is unsustainable, and unless this economy truly hits break-away velocity, there will be a reckoning. That day, however, is not today. I need something to write about in 12 to 18 months. We'll have to come back to this.

Is monetary policy too restrictive? Not yet. The FOMC certainly is at risk of going there, and may have to zig when they wanted to zag in order to avoid strengthening the U.S. dollar too much. Should the ECB and BOJ continue to lag on policy, the need for the FOMC to apply the breaks will become glaring, in my opinion, within six months time.

Are investors overly optimistic? Certainly not. There may be an abundance of complacency in the air, but there is almost a complete lack of anything resembling "exuberance" present in the conversations that I am having.

Are earnings still growing? Yes, indeed. Second quarter earnings grew at more than 24% on revenue that increased by a rough 9%. Expectations for earnings growth for both the third and fourth quarters of this year remain above 20% for each, while projected revenue growth remains strong, as well.

Are domestic macroeconomic data-points supportive? Quite succinctly, with occasional blips, the economy is still hitting on most cylinders. Witness, still-strong retail sales, regional PMIs, and most recently the latest addition -- nonfarm productivity.

Feel better? No? Maybe this will help...

China's Commerce Ministry announced this morning that a vice minister will travel to the U.S. (perhaps this month) at the invitation of the U.S. Department of the Treasury. Obviously, this will start as low-to-mid-level discussions, but negotiation must start somewhere. China reports third-quarter GDP on October 15. That number is, and always has been, important to Chinese leadership. In my opinion, more so than the individual components that comprise the headline print.

The intent of the Chinese regime here is, I think, to try to head off President Trump's planned tariffs on an additions $200 billion worth of exports to the U.S. With the Chinese economy already seeing slowed growth across nearly every single major data-point, getting the U.S. to delay this imposition might be crucial. What the U.S. wants in return will not be easy to deliver. Obviously, the U.S. side will be asking for a more balanced environment for tariffs, as well as protection for U.S. firms doing business in China from having to share or transfer key technology to their Chinese partners. Also on the docket will be the outright theft of U.S. intellectual property rights and the softer Chinese currency.

Clearly, there is a lot to be remedied, and much of it likely falls from a decision making perspective beyond the responsibility of China's Commerce Ministry, but making the effort to come here and re-open negotiations is the only way this ball gets rolling. This is a significantly positive development.

Every trader's favorite stock reports tonight. Every trader's favorite growth stock, that is. Actually, the entire group (the semiconductors) has traded sideways, albeit in a wide range for much of the year. The hottest name in the group, CEO Jensen Huang's Nvidia will put its Q2 data to the tape tonight after the closing bell. As we used to say back in the day, "you leave on the bell tonight, don't bother coming in tomorrow, sport." Honestly, if you go for your hat and coat at 4 p.m. tonight, just how important are you?

Broad industry expectations are for EPS of roughly $1.65 on revenue of $3.1 billion. If this is how the numbers roll, this will be good enough for year-over-year earnings growth of 79% on revenue growth of 39%. Whispers for EPS are running amok, with many outlandish numbers being thrown around to the upside. Even with consensus expectations so hot, the unofficial expectations are enough to caution this old dog.

On Monday, ahead of this report, and well ahead of the Gamescom 2018 plate-spinning exercise in Germany later this month, the firm announced their latest -- the roll-out of the first set of chips to be based upon the firm's Turing architecture. Exciting? For sure. The firm labels this offering as the "most important innovation in computer graphics in more than a decade." Why ahead of earnings? We'll have to wait for Huang's commentary later today to find the answer.

RM Columnist Eric Jhonsa covered this extremely well earlier in the week. I read Eric on all things tech. He is simply the best at what he does. If I were to go there, my thoughts would be greatly influenced by his. So give his column a read.

Guidance on the following will be key: 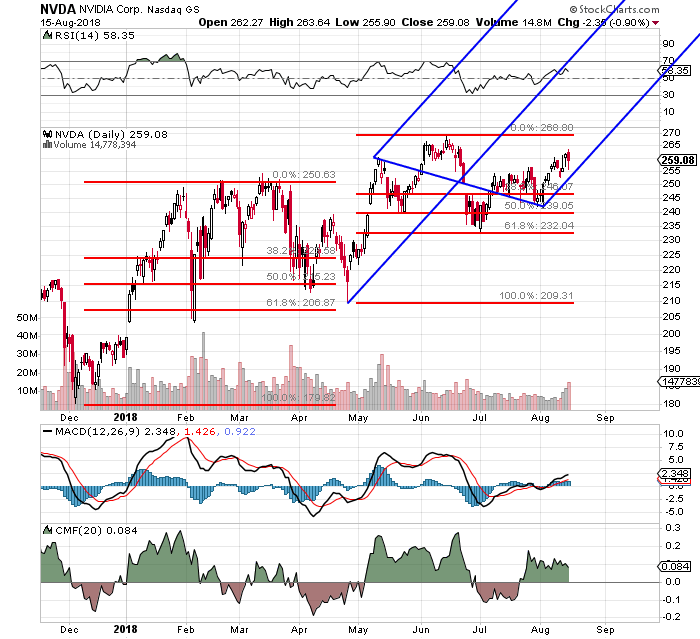 What does this daily chart of NVDA tell us? For one, Money Flow has been strong for about a month. The daily Moving Average Convergence Divergence and Relative Strength both might look rather pedestrian in nature going into tonight's call, but neither signals a problem in the least. More pronounced here is this name's repeated penchant for finding support at a 61.8% retracement off of recent highs on pullbacks.

This indicates, to me, algorithmic control of the point of sale. Figuring out where these guys live is how you beat them, gang. At the moment of truth, it will be you, silent in the weeds, covered in slime just to mask your scent. It will be them who set their algos, and then go back to watching teenagers crack up riding skateboards on YouTube. Let them be hunted. You be the hunter.

What I also see is the very beginning stages of a new Pitchfork should a breakout occur. Not only does support for this Pitchfork extend into the $270s as soon as early September, it suggests much-higher prices after that. Of course, all you need in the first place is the positive break. Wells Fargo did hand NVDA a double upgrade yesterday afternoon. That bit of positive info brought with it a $315 price target.

I am long this stock. Is is too late to get long some equity? Well, the name has been mildly increasing in price sine late June, despite yesterday's tech selloff. The lower trend line of support has held to the same dramatic launch angle really since late 2015. Obviously there is risk going into an event like this.

I am also short NVDA 232.50 puts that expire tomorrow. I am short these at much higher prices, as I timed this event nearly two months ago, but last night, given the nature of this beast, they still paid $0.93. The 240 puts with the same expiration paid $1.79. Might be a decent scalp to take.

Nvidia is a holding in Jim Cramer's Action Alerts PLUS member club. Want to be alerted before Jim Cramer buys or sells NVDA? Learn more now.

Get an email alert each time I write an article for Real Money. Click the "+Follow" next to my byline to this article.
TAGS: Investing | Global Equity | Technology | Economic Data | Earnings | Economy | Newsletter | Politics | Stocks