The retail sector's brick-and-mortar struggles are opening a door for expansion by restaurant and entertainment chains. In fact, companies that offer both food and entertainment -- like Dave & Buster's  (PLAY)   -- could be the biggest beneficiaries of traditional retailers' prolonged contraction.

Dave & Buster's has made no secret of plans to aggressively expand. The company believes that it's "significantly under-penetrated," with internal studies and third-party research suggesting Dave & Buster's has a total U.S. and Canadian store potential in excess of 200 locations vs. the 81 open today.

The company's new-store expansion strategy is dictated by a "site-selection process" that takes into account the "location, size and design of our stores based on consumer research and analysis of operating data from sales in our existing stores," the company wrote in its latest 10K report. The process aims to maximize the return on capital investments by choosing the right areas and right venues to house its massive restaurant, bar and game room.

Strelzik believes that Dave & Buster's stock remains undervalued and expects the company to have solid same-store sales growth through the remainder of the year. The firm reiterated its Outperform rating while raising its price target to $51 from $48, representing a potential upside of 15% from the stock's closing price on Monday.

Dave & Buster's declined to comment for this story, saying that the company will be media-dark until after its earnings release Sept. 6. But if you've even been to a Dave & Buster's, you know that the venue is expansive -- housing a restaurant, a bar and an arcade area. The company's guidelines dictate about 26,500 square feet for its small-format stores, while large-format venues must have about 40,000 square feet. That's in addition to 300 to 400 parking spaces.

Venues capable of housing such a behemoth tend to be faltering department stores like Macy's (M) (the average size of a Macy's in the Northeast is 34,391 square feet), which announced last week, following a surprisingly strong quarter, that it will close 100 of its 850 U.S. department stores in the coming months. Struggling teen-retailer Aeropostale (AROPQ) similarly announced plans to close 153 stores in North America after filing for Chapter 11 bankruptcy protection in May. And in April, Sears Holdings  (SHLD)  said it intends to shutter 68 Kmart locations and 10 Sears sites this summer.

"Macy's shrinking could dramatically expand the growth time frame for Dave & busters. It might be a win win for both companies." Action Alerts PLUS co-manager and Real Money contributor Jim Cramer said in an email exchange.

While most retailers are voluntarily closing stores, some are being pushed out by landlords and mall owners who have noticed the declining profitability of stores that were once staples of the American mall landscape. "The department store's primary role is to be a generator of traffic, but its effectiveness has diminished over the past 15 years," SunTrust analyst Ki Bin Kim said in an interview Monday.

Versace, who's chief investment officer of Tematica Research and co-author of Cocktail Investing, added in an interview that malls "are looking for properties to not only drive revenue, but attract people to the mall in the first place. It is no longer, 'I need clothes for back-to-school shopping, let's go to the mall.' People get their backpacks and school shoes online these days without having to worry about the hassle of long lines and parking." 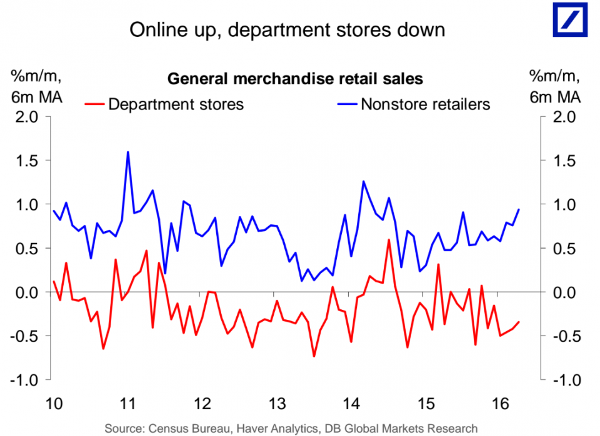 In the past, malls referred to department stores as "anchor tenants" -- stores that you could see from the parking lot, like Macy's or Best Buy (BBY) , and that gave a site what's known as "draw." But in the future, food-and-entertainment stores will likely serve as mall anchor tenants -- giving Dave and Buster's the opening it needs to expand, according to Versace. "Shopping malls are at a crossroads," he said. "Traditional stores are moving out and they need to be replaced by something."

Simon Property Group (SPG) , which leases space to 12 Dave & Buster's locations and is one of the country's largest mall real estate investment trusts, or REITs, recently reported second-quarter revenue and funds from operations (FFO) that beat market expectations. The company also raised its full-year FFO guidance despite reporting that its U.S mall and premium-outlet occupancy fell 20 basis points year over year to 96%, while total sales per square foot declined to $607 from $620.

But while Macy's store-closure announcement last week meant the retailer's stock soared more than 15%, publicly traded mall owners like Simon and General Growth Properties  (GGP) tumbled, even though the news was likely immaterial for those two high-end REITs. After all, SunTrust's Bin Kim, who covers mall and shopping center REITs, believes that very few if any of the Macy's stores slated for closure will be in SPG and GGP malls.

But Kim added that "even in the best malls, you don't want Macy's and Sears and Kohl's (KSS) to shut down at the same time." He also noted that "generally speaking, REITs would want to replace these large [department stores] with more productive entertainment and food stores."

While REIT stocks might have reacted negatively to the Macy's news, leaseholders seem to understand that the planned store closures could represent an opportunity to recoup lost profits on properties that have been underutilized by struggling department stores. The struggles of the retail sector are no secret and have been well-documented. However, less illuminated has been what form the average American mall will take once the transitional period away from department stores is complete.

General Growth Properties commented on the entertainment and dining sector in its most recent shareholder annual report saying, "Movie theaters and restaurants have traditionally been part of the mall. Over time they left the mall to establish free-standing locations. Time is bringing them back as traffic is at the mall! We are actively incorporating them into our centers. Over the past five years we have added nine theaters, 172 restaurants and 10 entertainment venues."

So the question for Dave & Buster's investors is, do you PLAY or stay away?

Dave & Buster's is in a prime position to take advantage of a shift in the way malls are formatted, as the square footage that's becoming available thanks to the decline of retail stores coincides with its own parameters and ambitious expansion goals. The company wants to more than double its size over the next four years. Luckily for the chain, suitable retail spaces across the country are opening up at just the right time.