This commentary originally appeared on Real Money Pro on Aug. 16 at 10:00 a.m. ET.Click here to learn about this dynamic market information service for active traders

Yesterday, it was revealed that Berkshire Hathaway ( (BRK.B) ) has increased its stake in Action Alerts PLUS holding Apple ( (AAPL) ) by 55%. Berkshire, led by Chairman and CEO Warren Buffett, first disclosed a $1 billion position in the tech giant in May. Now the holding company owns $1.6 billion of Apple.

However, while Buffett has been buying Apple, other notable fund managers have been selling. Recently, well-known names like Tiger Capital Management and Soros Fund Management have been liquidating shares of the iPhone manufacturer.

Which fund manager is right about Apple? Let's consult the charts.

According to the charts, Buffett made the right call. Apple's weekly chart has formed a bullish, double-bottom pattern (green semi-circles) over the past year. Over that same time period, Apple's weekly Moving Average Convergence Divergence indicator has formed a bullish inverted head-and-shoulders pattern (L-H-R). Both patterns indicate that Apple is likely to move higher in the medium term.

For the first time this year, Apple has finally broken above its 50-week moving average (blue). The stock's 200-week moving average (red), which has supported Apple for years, rests below -- at $93.61. Short-term traders should stick with their positions, as long as Apple remains above that level. 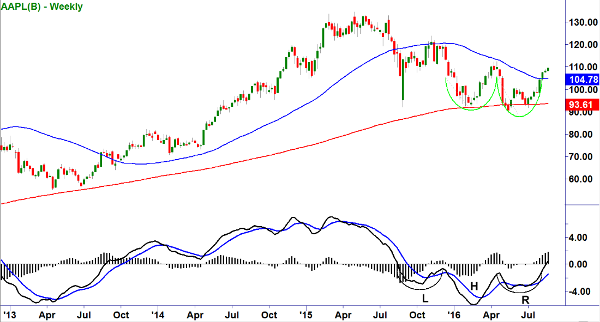 The technicals may be on Buffett's side, but an even more powerful force has come into play. A major central bank has also been accumulating shares of Apple.

The Swiss National Bank now owns $61.8 billion in stocks. The central bank listed over 2,500 U.S. companies in a recent SEC filing, including Microsoft ( (MSFT) ) and Exxon Mobil ( (XOM) ), but the SNB's largest equity position is in Apple. Coincidentally, the SNB's $1.6 billion stake is similar in size to Berkshire Hathaway's.

I realize that the above paragraph seems bizarre, but after all, it's 2016. No longer satisfied with asset purchase programs that have driven interest rates below zero, central banks are now scooping up everything in sight. For example, the Bank of Japan now owns 60% of that country's ETF market.

However, while the BoJ is only buying assets from its homeland, the SNB recognizes no such limitations.

Does it make sense that a foreign central bank can create money and then use it to buy Apple? That's a question for economists to debate. Apple longs, like Buffett, need only understand that a powerful ally is on their side, one that could help drive this stock's price for a long time to come.