"Everyone, deep in their hearts, is waiting for the end of the world to come." -- Haruki Murakami

Six months ago, the world was ending (for the umpteenth time since it ended in 2008-09). The world is always ending, right up until it doesn't end. Consider that not even 2008-09 ended the world...

Six months ago, oil was plumbing its ultimate low in the mid-$20s, causing widespread panic about currency risk -- particularly for those "commodity currencies" like the Canadian and Australian dollar, Mexican peso and Russian ruble. There was concern that the large weighting of energy companies in high-yield indices would bring them all down, the certain spike in defaults forcing yields (and therefore the cost of capital for every below-investment-grade company) into the nosebleed section.

Six months ago, a common argument among economists and market forecasters was that U.S. dollar's strength was still in the early innings, due in part to the weakness elsewhere across the globe and the Fed's initiative to carry out its promise to "raise rates" multiple times this year (which would surely strengthen the greenback). Evidence, by the way, that the dollar would/should strengthen during a Fed tightening cycle is actually mixed. However, due almost certainly to turmoil in commodity markets and related assets, Janet Yellen & Co. have been on hold since raising the fed funds rate by 0.25% in December of last year.

And six months ago, the memory of last August's China-induced quasi-flash crash was still very fresh. The fear was palpable as just about every major index except the S&P 500 entered a bear market. Below is a chart of the S&P 500, Vanguard European stock index (VGK) , Vanguard Emerging Market index (VWO) , U.S. Small-Cap index (IWM) , the High-Yield Bond index (HYG) and crude oil from May 2015 to February 2016 lows: 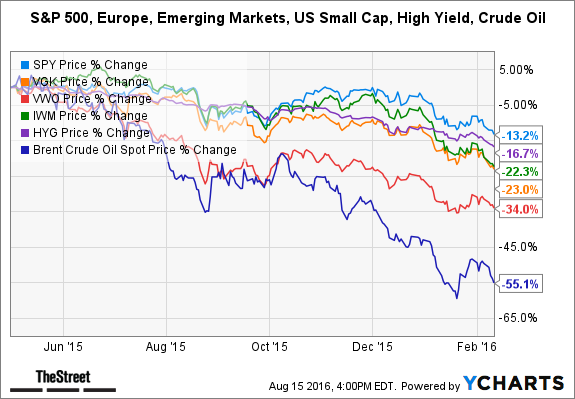 A diversified equity portfolio got hurt very badly over this nine-month stretch. The argument for being invested solely in U.S. assets, and in particular those with no energy exposure, was never more prevalent that I can recall.

And then the unthinkable happened -- people remembered that oil and gas are still necessary inputs for the global supply chain and markets around the world commenced an enormous rally off those mid-February lows, led by energy and anything related to it. 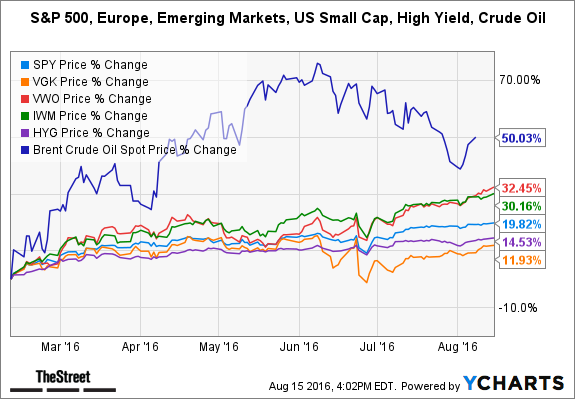 Emerging markets, helped in no small part by stabilization and even appreciation in their currencies (against the dollar), have been one of the best places to be for six months. European stocks have lagged, though until the Brexit vote they were on even footing with their American counterparts.

I believe the price of oil actually may hold the key to the trend for European stocks, believe it or not. And not because I think the price per barrel has any dramatic impact on the health of European companies, necessarily, but because of the correlation between oil and the euro: 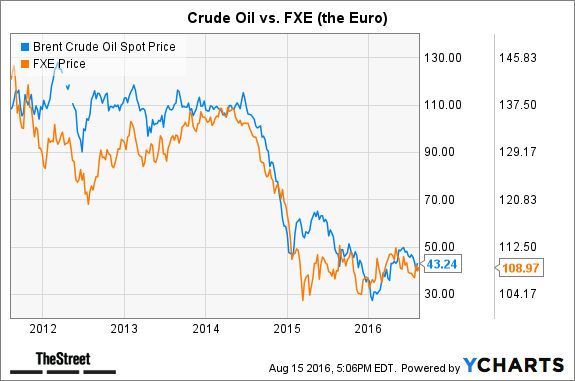 I believe oil continues the process of bottoming/firming and heads higher throughout the rest of the year -- partly due to the fact that production is still falling here in the U.S. (we are down over 1 million barrels per day year over year), and partly because everyone else who sells oil (including the Saudis) needs it higher than where it is today. A weakening dollar will also contribute. 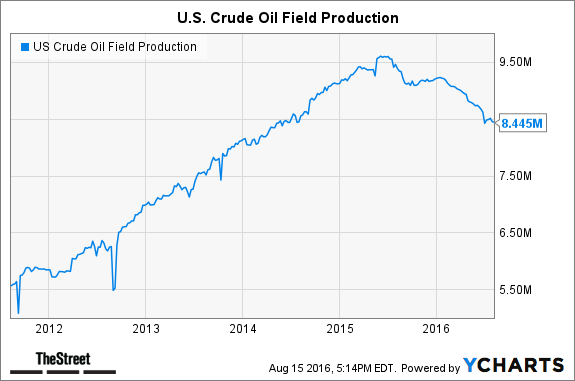 Rhetoric out of the Kingdom continues to soften, as we saw a report Monday that the Saudis may be willing to coordinate with Russia (a key non-OPEC member) to stabilize prices. All of these OPEC-related headlines ought to be taken with a grain of salt, but the fact is that Saudi Arabia floating similar rumors in February is what caused oil to reverse in the first place. That was when oil broke $30 to the downside; the current batch of rumors started when oil broke $40 to the downside two weeks ago. The Saudis have spent 20% of their USD reserves in the past two years due to funding gaps caused by the low oil price, combined with the resulting cost of having to prop up their currency.

In addition, the technical picture for crude oil looks bright: 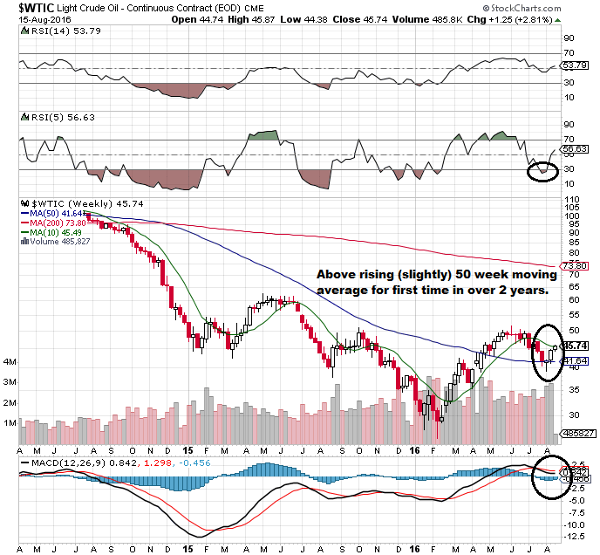 In addition to other factors, higher oil should continue to keep downward pressure on the dollar, and it is interesting to note something that may seem obvious to some -- the dollar is inversely correlated to yields on our 10-year Treasury bond. 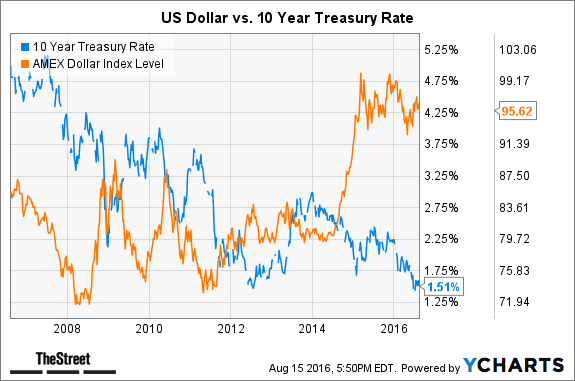 Please don't hesitate to reach out if you would like to engage us in a dialogue about your investments, whether or not they are held with our firm.

Have a great week.

Get an email alert each time I write an article for Real Money. Click the "+Follow" next to my byline to this article.
TAGS: Investing | U.S. Equity | Energy | Currencies | Markets |