So much. The wheels keep turning. Of course they do. Monday night, Nvidia (NVDA) CEO Jensen Huang announced the firm's latest chip offering that will be based on the new Turing architecture. The stock runs ahead of quarterly earnings results, which are due this Thursday afternoon. Hmm. Could have waited until the big Gamescom expo later this month. That was expected. As an investor, I am not complaining. Isolation of the product in the news cycle. Makes sense, at least for now.

On Tuesday came Berkshire Hathaway's (BRK.B) 13-F filing for the second quarter, which showed a more than 5% boost to the firm's holding in consumer technology giant Apple (AAPL) . Also significant were sizable increases in airline industry longs Delta (DAL) , and Southwest (LUV) . A move that I thought interesting as a trader type was a nearly 21% increase in the amount of Goldman Sachs (GS) shares held by the conglomerate at the end of June, which was at least partially paid for by a reduction in the firm's holding of Wells Fargo (WFC) . This information, though very interesting, is not current. You can't trade off of it. Or at least I cannot. What is front and center on this Wednesday morning are the retailers specifically, and more broadly... the American consumer.

You may or may not have missed the New York Fed's quarterly report on household debt and credit. For that same quarter mentioned above, despite a rising interest rate environment pursued by our central bank, household debt grew 0.6% to $13.29 trillion. This is the sixteenth consecutive quarterly increase. Interestingly, as wages have been rising ever so slowly, tax cuts have also had an impact not just on corporate America, but on the family as well. Personal disposable income stood at a $15.46 trillion annual rate in the second quarter, which put the debt to income ratio at 86%, down from 116% at its very worst in 2008, and the lowest ratio seen for the U.S. household in this space since 2002. So we're healthy?

Is this improvement in the condition for the U.S. household sustainable? Probably not without a substantial increase in wages, provoked by both tight labor conditions and consumer level inflation. This is, in a way, a microcosm of the national debt picture.

In real terms, national debt keeps rising. Tax revenue has fallen to roughly 16.5% of GDP, from numbers that poked around 19% twenty years ago. With spending clearly committed to rise in certain spots (defense, health care), how long do we have until the fiscal picture catches up to us as a nation?

You know what? I don't know the answer to this question, as serious as it is. Stocking up on potable water and canned food is never a bad idea, but one thing I do know is that one might expect the current state of affairs to place the nation's retailers in the sweet spot. It won't last forever, but I am going to play this game.

Retailers in the Sweet Spot

Advance Auto Parts (AAP) hit one out of the park on Tuesday morning, despite rising transportation costs (which is why investors should have at least one railroad in their portfolio). Corporate repurchase? Increased. Home Depot (HD) also had a great quarter, raising sales estimates for the full year. The stock came in a bit on expectations of a potential margin squeeze, but these shares were already up significantly since April. These two names are not normal retailers. I would not classify them as multi-line, so to speak.

Today, we'll hear from one of my holdings, Macy's (M) , and tomorrow it will be both JC Penney (JCP) , and Walmart (WMT) (another name of mine) that step to the plate. By the way, Tuesday's high for Macy's pressed right up against my target price of $42 for that stock without actually touching it.

So, what's the plan? Heck, I won't pretend to tell you what to do. But here is my plan of action going into these earnings reports.

Okay, we already know that the weekly Redbook report has been as hot as it gets over recent months. That lends us a bit of confidence. Today, we look for EPS of $0.50. Whispers are running a penny to two pennies above that. We look for revenue of $5.5 billion. With a bit of luck that print hits the tape closer to $5.6 billion.

What is going to be important this morning will be updated information on margin improvement, which could be tough in this trade environment. Way back in the first quarter, we saw for Macy's some significant year over year increases in both gross and operating margins. What we really need to see from Jeffery Gennette's crew this morning is an operating margin of 4.6% or greater.

For Q1, that number posted at 4.09%. We'll also need to see some acceptable guidance on that item. In a worst-case scenario, the firm does pay you 3.6% just to own the shares. Current ratios are solid, and we largely ignore Quick ratios when it comes to the retailers, due to their inherent need to stock sufficient inventories. 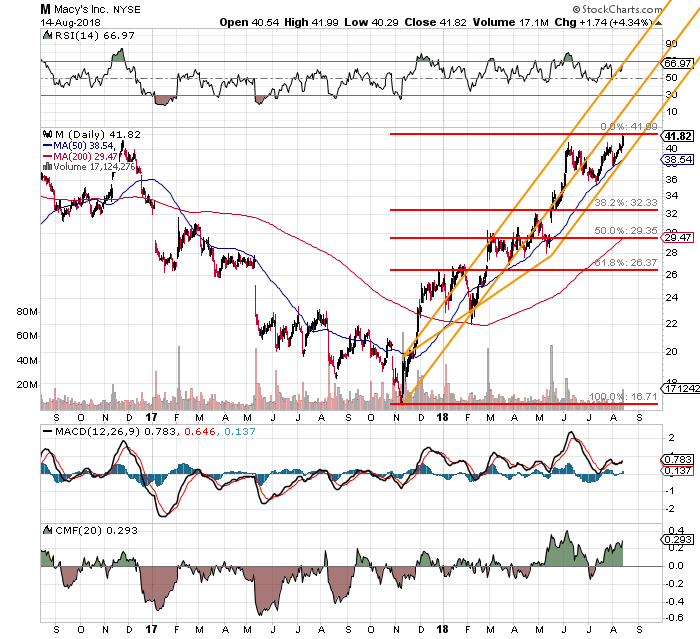 This Pitchfork is one heck of a beauty. I'll tell you what, this Pitchfork breaks, and Fibonacci support really does not show up until we hit $32.25. My net basis for this one stands just above $33, but I'll be darned if I let it come in that far before I wet the beak a little.

See that July low of roughly $36? That's where I step to the plate on a poor reaction this morning. Options markets went out last night pricing in a nearly $2 move in either direction, so anything beyond that would seriously impact Relative Strength.

Where does the stock go on a positive reaction? Well, $47 is not unreasonable should we see at least one successful defense of last night's close. I am not going to change my price target prior to this morning's numbers, but stand by on that note for more information after we hear Gennette sing. Should have sold $36 puts -- did not trade at significant enough value going into this release to make taking on the risk worth it for me.

Walmart is trickier than Macy's, in my opinion. Margins have already been in compression mode, as the likes of Amazon (AMZN) and Target (TGT) have increased competition for sales. Tomorrow morning, we'll look for EPS of $1.22 on revenue that runs just below $126 billion. Whispers are bouncing around at a penny above consensus. That revenue should be good enough for year over year growth of 2.1%, normal (even pretty good) for this quarter for this firm.

The real story here -- other than margin compression due to rising wages, increased transportation costs, and trade wars -- will be the success, or lack thereof, for the firm's internet business. This is where the knee-jerk will come from on Thursday morning. You'll recall that back in May good news on this front triggered a bottom for this name. The shares have been on the rise ever since. 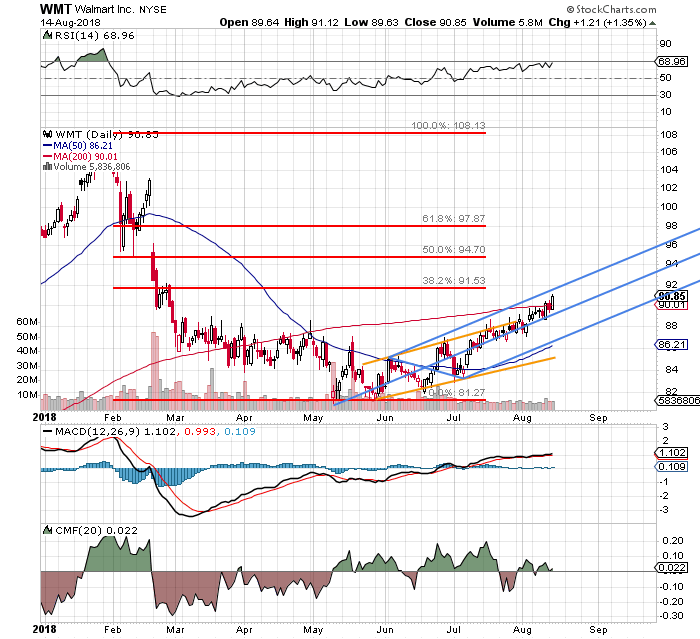 What we have here is a stock poised to hit Fibonacci resistance. Even a break there, runs the name into traffic throughout the mid-$90s. My current price target for WMT is $92. A positive reaction to earnings this week could provoke me to go as high as $95, but I would be surprised to see anything more than that. I would welcome it, but it would surprise me.

The $87 puts expiring this Friday went out at $0.45. That might be a worthy risk. If the immediacy of that expiration scares a trader off, one could still get $0.53 for the October $82.50 puts. This would provide a little more cover versus less overt risk.

FB, AAPL, GS and NVDA are holdings in Jim Cramer's Action Alerts PLUS member club. Want to be alerted before Jim Cramer buys or sells these stocks? Learn more now.

Get an email alert each time I write an article for Real Money. Click the "+Follow" next to my byline to this article.
TAGS: Investing | Global Equity | Consumer Discretionary | Consumer Staples | Economic Data | Earnings | Economy | How-to | Markets | Newsletter | Politics | Stocks