Before you write this stock off as a loss, you should know that H&R Block is bouncing back in a big way in 2017. Yesterday's close placed the stock just $0.25 below a one-year closing high. The stock is up 36% year to date, and if H&R Block's chart is to be believed, further gains could be realized. 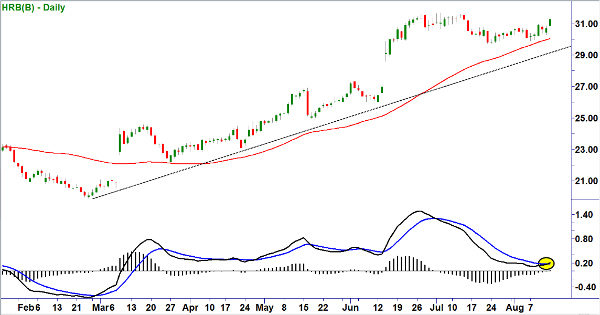 Can the stock continue its impressive run? To answer this question, we looked at the weekly chart. There, we can see that the stock has an additional 10% upside before it encounters its first serious resistance level, just above the $35 area (green line). Beyond that, the next level of resistance for this stock is in the $37 area (blue line). 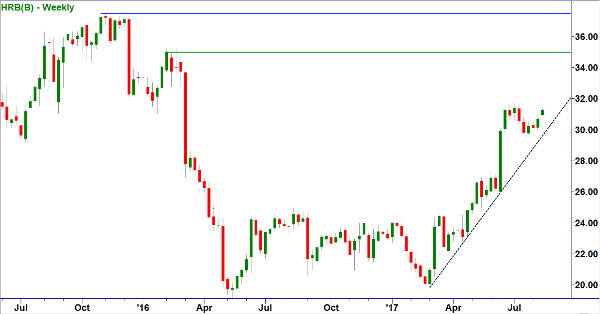 Why is H&R Block rallying? The rally kicked off six months ago, when the company announced fiscal third-quarter earnings. At the time, which was during the tax off-season, Block announced that it was shedding customers at a slower pace than its rivals. The stock jumped 15%.

Now H&R Block is lighting up the charts as the company's fiscal first quarter earnings report approaches. The company is scheduled to report on Aug. 29, a mere two weeks from now.

When a stock rallies into earnings as Block is doing now, it is sometimes a precursor to good news. The flip side of this is that any potential good news is already being priced into the stock. This reduces the chance of a further rally after earnings, even if the company releases an impressive report.

Therefore, the preferred tactic would be to enter a small position now. If the stock falls after a strong report, I'll add to the position. If the report is less than impressive, I won't add to it at all, and I'll close the existing trade for a small loss.

Get an email alert each time I write an article for Real Money. Click the "+Follow" next to my byline to this article.
TAGS: Investing | U.S. Equity | Industrials | Earnings | Stocks

General Electric Isn't Out of the Woods Yet, Here's How I'd Trade it

GE remains a cash flow based story, but I see two negatives.