Sometimes when things get high, you have to look low. Chasing market highs can feel wrong for some. Quite frankly, there are few things more bullish than a new high; however, it comes with emotional stress for many traders.

No one wants to top tick a stock, and corrections can be painful from the highest levels. Sometimes buying low can work as a balance, almost a strange sort of diversification. It isn't a diversification as defined by the traditional sense of the word, of course, but beaten-down stocks can often act differently in a market pushing new highs, whether those gains continue or we see some sort of correction.

A dash for trash, a play on stocks "due" to revert to the mean, or simply a belief bad news is already priced in all lend support to this trading thesis.

Let's take Alkermes (ALKS) as an example. Granted, the daily chart doesn't look that bad in terms of price over the past four months. The chart runs from lower left to upper right, which is what any bullish trader wants to see. 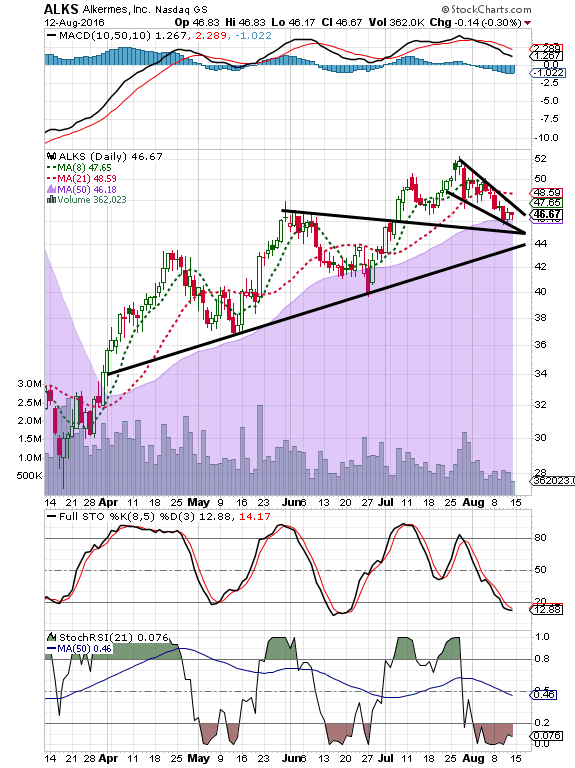 The issue comes in the secondary technical indicators, those away from price. Price has been trending lower, although I could argue it as a bullish flag coming into support here at the 50-day moving average (SMA). This is the purple shaded area.

Only once has the stock violated this level significantly since the beginning of April, and it only maintained a price below the 50-day SMA for a single day. This recent pullback though has been enough to push the StochRSI and Full Stochastics into oversold territory.

Now, we are seeing a potential crossover in the Full Stochastics while under 30. A crossover along with the StochRSI moving out of oversold territory has been bullish for the price action in the following few weeks. The risk-reward here is interesting, as the upside on a close over $47.75 looks to be around $52, while the $44 level, if not a bit higher, looks to be a clear stop level.

A buying trigger isn't far off in terms of price, the StochRSI, and the Full Stochastics, so keep an eye peeled here for a swing trade.

Pushing out to a weekly view, we can see the damage failed trials caused in January. The stock is still well off those highs, even with this recent rally in the falling wedge pattern. 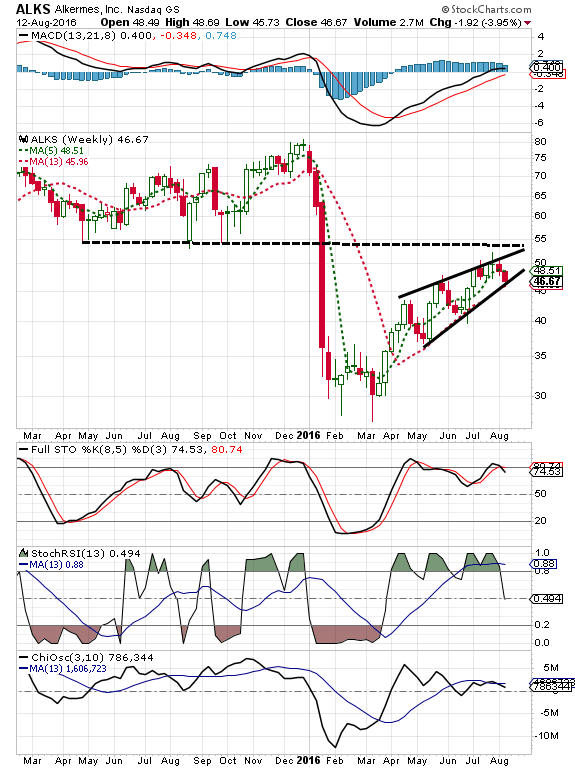 Upside here again aligns with the daily chart, although I might put it at $55 rather than $52. ALKS is right on support here, with the 13-week SMA and the lower portion of the rising wedge aligning with current price.

Again, I wouldn't give this room under $44, so our stop and targets hold similar risk vs. reward properties. I will say the weekly chart isn't as enticing as the daily chart, due to the failing technicals that are more bullish in nature, but in the end I would let price dictate entry.