Who Cares About Turkey?

Well, now that I have your attention, obviously those with exposure to the Turkish lira care. Then there would be those exposed to lenders that had made loans to businesses that primarily conduct commerce in lira, but are forced to borrow in euro terms. Contagion? The word was mentioned over and over again on financial television -- even long after the marketplace had signaled that any associated fear was well under control.

My first clue came from the behavior across gold futures markets since this crisis blew up. There is no doubt in my mind that if the crisis at hand were perceived as potentially systemic, as safe haven seekers were drawn to the U.S. dollar, to the Japanese yen and to U.S. sovereign debt products, they would also be drawn to gold. Instead, gold markets reacted to currency shock -- not systemic risk -- making gold, for now in my opinion, oversold. Not considered a safe haven, crude also reacted more to this currency shock than to news of increased Russian production.

The greater threat to financial markets will come, in my opinion from the slowing of global growth, at least partially due to the current state of international trade. This thought process is lent some credence by last night's rather disastrous across-the-board macroeconomic numbers released by China's National Bureau of Statistics.

China put the nation's July data to the tape -- and given how quickly the situation seems to be deteriorating, one must wonder when indeed that nation will seek a seat at the table of negotiation.

For the Month of July, in China

Fixed Asset Investment. Growth slowed to the slowest pace since this data was first recorded back in 1992, printing in decline for a fifth consecutive month.

Industrial Production. Missed expectations for a third consecutive month, while printing at a growth rate equaling the nation's slowest since February of 2016.

Retail Sales. Finally showing a dent in the armor, missed expectation while slowing from the prior month.

Unemployment. This item has only been recorded since January. Headline unemployment "popped" up to 5.1% from June's 4.8%.

Oil Production. The NBS reported that Chinese oil production fell 2.6% in July, and now stands from a daily perspective at the lowest level since June of 2011.

China will not report Q3 GDP until October 15. The National Bureau of Statistics reported annualized growth of 6.7% for the second quarter. Depending on the veracity of the data, one must start to wonder if China can indeed hang on to growth of 6.5% going forward.

A crisis in Turkey will cause problems for investors. I do not mean to make light of that situation. I think we all, however, do know the drill. The European Central Bank will have the back of those banks over-exposed to the lira. Greece, Cyprus, Spain and Portugal bear witness, Mario Draghi's ECB is not afraid to go where it has to in order to ensure stability. If needed, the rabbit hole beckons.

The white whale in this sea is the Chinese economy, and the potential implications of a visible slowing of growth for the rest of the planet. Is there good news? Sure. preliminary numbers for both German and eurozone GDP showed better-than-expected growth for the second quarter. Is that enough, or are we headed for a double top reversal?

Oh my. I am not yet convinced of this, but investors are asking the question. One must be cognizant of the fact that for all intents and purposes, the S&P 500, the Nasdaq Composite, and the Russell 2000 have all met repetitive resistance at certain points on their daily year to date charts.

The Dow Industrials have not yet suffered the same fate, as the January highs for that group still proves to be a scene out of "Operation Market Garden." (Let's see how many of you get that one.) When most folks refer to "the market," as in "the market was up or down x number of points today," they refer to the S&P 500, the broadest and supposedly most well-rounded large-cap index that our financial marketplace has to offer.

The S&P 500 hit its 2,872 high for the year way back in January. That level was approached, but not touched, early last week when the index peaked around 2,862. Through tough talk and action on trade, corporate earnings had apparently carried the day in 2018.

Then this Turkish currency crisis strikes. Does the index make another run at the top? Does, the index, having met resistance in nearly the same spot, crawl back into its hole and wait for another day? Just so you know what you're looking at: 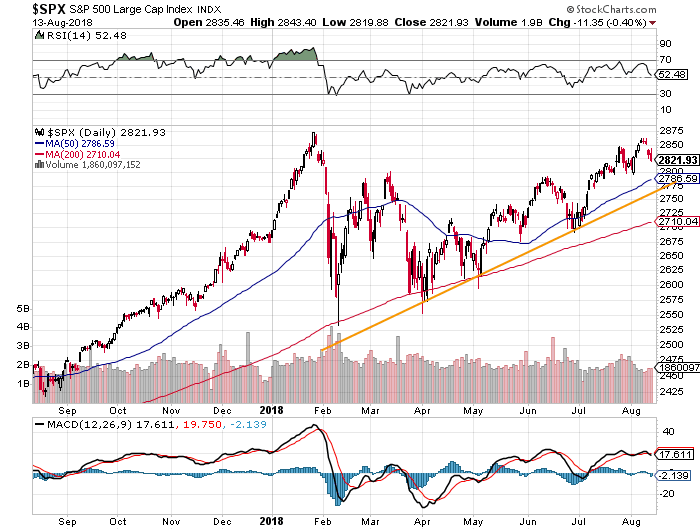 The truth is that I do not see a Double Top Reversal in the offing. It is true that there can be many months in between peaks, and those peaks must be within a rough 3% of each other, while the trough must dip at least 10% from the first peak -- and this chart does certainly meet all of those conditions.

There must also be an increase in volume as the index plummets from its second failure at the top. We certainly have not seen that. At least not yet. Also key here is the rising lower trend line (orange). That line is not even close to being tested.

In order to confirm a double top reversal, you are going, at least this is my understanding, to need to see a test and subsequent failure at the lowest point between the two mountain tops. That spot is now roughly 300 points to our south. Not close enough to even yet consider, unless something awful happens.

No, I think it more likely that market volatility increases headed into Autumn, as headlines that cover trade tensions with China, NAFTA and the potential for America having hit peak earnings bat the ball around for a bit.

Keep in mind that S&P 500 earnings are expected to rise year over year by more than 20% for both Q3 and Q4. Revenue growth, though expected to be somewhat biased to the domestic, is still expected to print around growth of 7% or more. Keep in mind that though not an isolated economy, the U.S. is a far more self sufficient economy than that of our global competitors.

And also keep in mind that historically peak earnings and market tops are really not all that closely correlated. These two events can miss each other on timing by up to a year with no real pattern exhibited as to which one indicates the other.

Get an email alert each time I write an article for Real Money. Click the "+Follow" next to my byline to this article.
TAGS: Investing | Global Equity | Economic Data | Earnings | Economy | Newsletter | Politics

The Fed Is Stuck Between a Rock and a Hard Place

The Fed is always backward looking, and that's why the market is unsure of where to go for now.

As More Economic News Hits, the Market Is Struggling to Hold Up

Thursday there will be another reading on inflation when the PPI report is released as well as weekly unemployment numbers.