Football season is upon us again. While that means more time in front of the television for many, it may not translate into something positive for everything associated with a television.

Electronic Arts (EA) wants you in front of that TV. They need you in front of that TV, but playing games rather than watching football or baseball or the Olympics. The stock's been strong since February, now trading some 40% off its lows, but I'm seeing some warning signs on the technical side of the fence. Warning signs are not triggers, so be careful not to confuse the two.

The daily chart is probably the greater area of concern here. The stock has been lower for a week straight and now tests the support level of an ascending triangle. This has been testing several times in the past month and held on a closing basis every time. It looks important to stay focused on the closing level since intraday we've seen failed breakdown attempts several times. One positive for bulls here is there are really two support levels as the 50-day simple moving average (SMA) has worked as support going all the way back to May. That level sits a single dollar below the pattern support trend line line. Unfortunately, secondary technicals have all broken down in front of price. 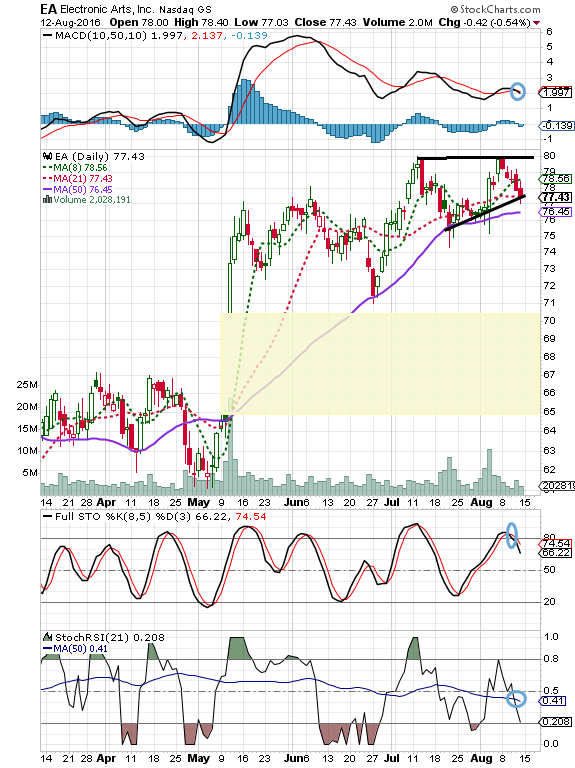 You need to be wary on the long side when three bearish divergences are in place. The Full Stochastics bearish crossover has been a very good short-term indicator, but given our five-day drop it may already be priced in. The StochRSI has shown a tendency to get into oversold levels once it starts falling rapidly. We aren't quite there yet, nor anywhere near the lows we've seen several times already this year. Also, the bearish crossover in the MACD has been a harder fight for bulls, so I would be cautious here. The double-top of $80 should be the key for many. A close over this level should put any bear on the sidelines and bring momentum traders into the name. I don't see any reason to be long under $76.40 or short over $80.

The weekly pictures isn't as bearish, but there are concerns. The rising wedge is being threatened on the support side. Should it fail, then I'm looking at $73 as the next area of strong support. We still have a bullish MACD, but if you look closely, it appears as if it is beginning to rollover. The Full Stochastics is bleeding a slow death under 80 with a bearish cross and has me most concerned along with the rapid descent in the StochRSI. We've only has a single down week and that's a nasty fall in momentum. Lastly, volume as shown in the Chaikan Oscillator was rejected at resistance and is poised to move lower. 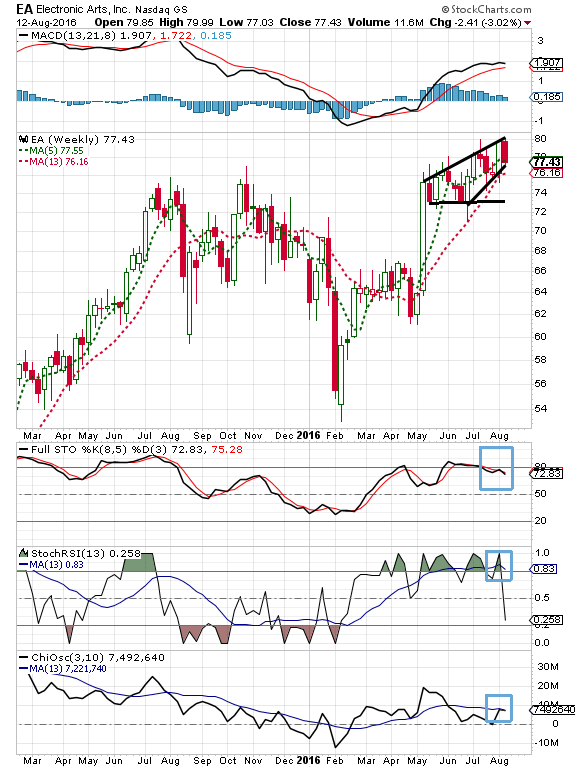 Overall, the warning flags are mounting in EA. Should we see any overall market weakness, we should see bearish price triggers on both the daily and weekly charts. I suspect we'll see a 4-5% drop in this name if the market drops even 1%. A flat market could actually be enough to trigger a short side trade. Again, I don't see any reason to be long under $80 unless you want to try and trade the current support on the daily chart with a tight $1 stop. Otherwise, I would look for the short triggers and aim for a 4-5% quick gain here.