As most of you rip that ugly thing atop your shoulders away from the familiar comfort of mankind's greatest invention (the pillow), you'll quickly discover that global equities again have focused upon the continuing crisis in Turkey. For sure, there is plenty of other material to focus on. Still, the threat of contagion must be appreciated by investors. The Euorpean Central Bank's supervisory arm has been focused on the exposure of several European banks to a rapidly weakening Turkish lira.

While $62 billion of international debt is nothing to sneeze at, and while Turkey's current-account deficit in relation to GDP reaches for the same levels that were experienced by Greece in 2012, I think investors can understand that there will be some forced profit taking across financial markets that likely will provide opportunity in a limited way. There just as obviously will be an artificial boost to perceived safe havens, which will force higher the U.S. dollar and Japanese yen. This also will pressure Treasury yields, which in turn will flatten the curve across the board. So much for net interest margins...

Here in the U.S., financial markets will work through the tail end of second-quarter earnings season, which means as usual that we will focus on the brick-and-mortar retailers. There also will be plenty of focus on macroeconomic data this week. We'll hear important numbers regarding July Retail Sales (impacted by dreadful auto sales), July Industrial Production, and cross-border investment for June. Perhaps just as key, if not more so than the rest to U.S. economic growth and development, will be the July data for Housing Starts released by the Census Bureau this Thursday.

Thar Be Squalls Ahead

You kids know who Glenn Kelman is? OK, easier question. You guys ever hear of Redfin Corp. (RDFN) ? First off, for the uninitiated, Redfin is a technology-based real estate firm that engages in traditional brokerage activities as well as title search, settlement services, mortgage banking operations, to name a few. The firm went public about a year ago but has existed since 2004.

On Thursday night Redfin reported second-quarter numbers that looked superb. Performance beat expectations for both the top and bottom lines. Revenue printed up 35.9% from the same quarter a year earlier. That's where the good news ended. Enter CEO Glenn Kelman.

Redfin guided third-quarter revenue below consensus, and net income way, way below consensus. By Friday morning, news broke that Redfin was up against a downgrade by DA Davidson largely due to some stark remarks made by the CEO the night prior during the earnings call. Kelman had said, "For the first time in years, we are getting reports from managers of some markets that home buyer demand is waning, especially in some of Redfin's largest markets." Kelman explained Redfin had reduced guidance as the product of his firm experiencing "an unexpected drop in Redfin's booking growth in the past three weeks." He also referred to "slowing traffic growth in a weakening real estate market."

Well, the Fed has been trying to tighten monetary conditions. So, is the sky falling? I am not going to flat out tell you that for housing we are either on the road to or around Armageddon. I am going to tell you that housing performance is, and always has been, regional. Redfin's markets are primarily out West, which had been among the nation's hottest markets throughout the recovery.

Do not be surprised to see, as labor markets continue to tighten, fluctuations in housing markets both driving and driven by demand for labor. Does performance for property values start to even off from a regional perspective? The most recent data we have from Case-Shiller, which is from May, still points to pricing strength on the West Coast. We won't see the June data for that item for another couple weeks.

However, Pending Home Sales for June were surprisingly strong, soundly beating consensus. Pending Home Sales turn into Existing Home Sales. That's good. In addition, the Census Bureau's June report for Construction Spending printed deeply in the hole but brought with it a huge upward revision to the May number. Mixed signals moving forward is what I see.

The largest two homebuilder ETFs easily would be the iShares US Home Construction ETF (ITB) and the SPDR S&P Homebuilders ETF (XHB) . These two are lower by nearly 13% and nearly 11% year to date, respectively. I am not sure the homebuilders are ready to pop. To maintain exposure to this space, I possibly might initiate a small long as something of a hedge versus overwhelming negative sentiment. At last glance, Freddie Mac still was predicting that home prices would rise 7% over the last half of the year and that total home sales would rise by 2.5% for the full year. Hmmm...

One seeking to broadly play the space through ETF exposure should expect performance to be lumpier for the ITB ETF, as that offering's largest holdings by far are D.R. Horton Inc. (DHI) and Lennar Corp. (LEN) to the tune of 14% and 13%, respectively, with no other holding represented by more than an 8% weighting. The SPDR XHB is far more evenly spread in the weighting of its holdings. Not a single stock accounts for even 5% of the portfolio. That's the one that I would consider.

If you are in this racket, then you are probably well aware that The Home Depot Inc. (HD) reports tomorrow morning, and that Lowe's Cos. (LOW) reports next week. Now, we already know that several suppliers that home improvement companies rely upon had rough quarters. We know that the weather for much of the country, particularly the Northeast, was not helpful back in the spring. That should be factored in, you would think. Still, the potential exists now that HD has worked its way back toward the top of the chart for a negative surprise. Both HD and LOW have formed double tops across June and July. Both have approached, but failed to reach, their January highs.

I understand that Lowe's is making progress. It appears to be back on the right track, and a better-managed Lowe's means increased competition for Home Depot. I am long Home Depot. The name at this point is my oldest continually held net long position. I have not been flat this name since early 2014. (Let's just hope they end up indexing net basis entry points to inflation before I decide to take a profit on this thing.) To be clear, just because I have stayed net long does not mean that my position size has remained constant. Let's take a look under the hood. 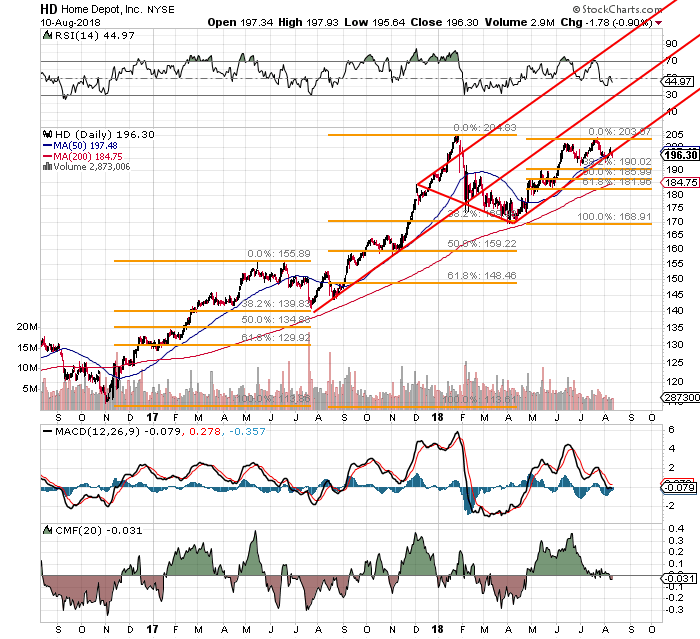 Despite some turbulence at the top, the rising lower trend line, already showing strength for years, actually increases the angle of its trajectory with Election Day 2016. One quickly spots the support that regularly shows up seemingly when needed at a 38.2% retracement off of prior highs. One also sees that the strict obedience of the name to the lower chamber of the pitchfork is actually in question as we head into tomorrow's earnings call.

Relative strength is waning, as is money flow, not to mention a noncommittal look for our daily moving average convergence divergence (MACD). The thing that is clear to me is that traders are showing caution in this name right now. I believe in Home Depot. I believe this is perhaps the best-managed retailer in retailing. I have seen it up close. This is my actual plan for my position going forward. A lot of guys give you that?

Target Price: 230. (You need to see a break above, and then at least one successful defense of the 205 level.) I expect this to take perhaps the rest of the year.

Point of Replenishment: 190. A poor reaction to the earnings call that pushes the share price below this level will trigger an add on my part (after the name stabilizes, so don't ask me on Twitter as soon as the darned thing opens.)

Panic Point: 170. It is here that I decide that I have a problem and will seek to salvage the remains of a profitable trade.

Note: There are no significant domestic economic events scheduled for today.