Still signing up people interested in a premium interactive webcast I'm planning to start in the Fall, with more timely analysis of stocks and deeper dives into my column ideas. If you haven't already, please indicate your interest to me: dan.dicker@thestreet.com

Pardon me for using more charts, and less words, this week to try and fathom where we are in the crude cycle.

I enjoy seeing most of the mainstream oil analysts come to conclusions on the unsustainability of oil prices that I came to more than a year and a half ago. It started with the fantastic Wood Mackenzie report on break evens that appeared (and I commented on) more than two weeks ago: 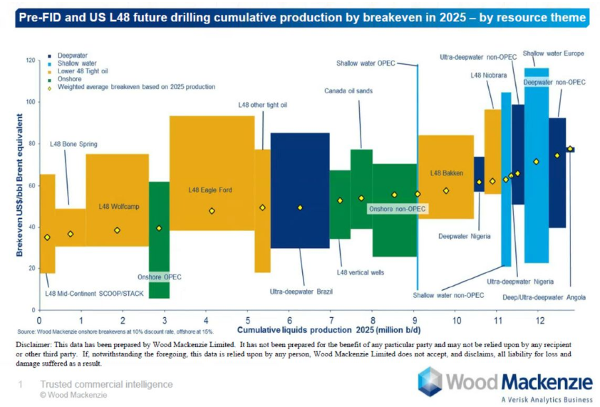 No need to go into this chart again -- but don't be fooled: Just because a certain shale area is yielding a weighted average breakeven price of, say, $40 a barrel -- as the chart says for the Wolfcamp area of the Permian -- it doesn't mean it's economically smart to run all the acreage, or that it's even profitable to do so.

Here is a chart from Arthur Berman (an oil guy who doesn't write much, but is definitely worth following) about real breakeven prices, as his analysis (with consultancy Rystad Energy) shows: 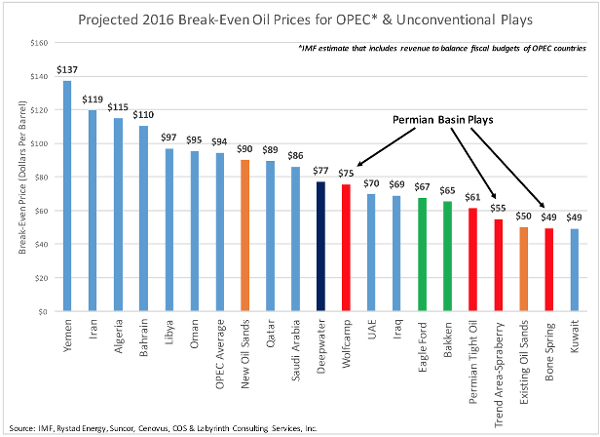 Berman's claim is that the Wood Mackenzie analysis just counts exploration, drilling and completion costs -- but doesn't include administrative, interest or tax costs. Adding those in, in my view, gives much truer breakeven numbers. Notice that Wolfcamp now appears to have a $75 breakeven price, even with all the efficiency gains that have been seen in the last two years.

If you like, you can also consider Berman's analysis on OPEC oil states. I don't want to take much time with those figures, but Berman is trying to put a price on oil where the sovereign budgets for these nations near a breakeven point. They are a lot higher than most people thought -- and equally unsustainable.

But social budgets can be cut with a lot more ease than bondholders can be lured into lending money to losing operations. Berman may be a bit pessimistic, but I believe only a bit. And we come to the same conclusion as we have held for the last year and a half: Oil prices under $75 a barrel will ultimately bankrupt everyone -- oil company and oil country, alike.

It has been my mistake trying to gauge how long both OPEC and energy CEOs would be able to dance around cash-flow-negative operations without doing what seems so obvious -- either cutting back on production severely, or just going bust. But with the current increases coming out of Saudi Arabia, Iraq and Iran, and the current promises of increases out of the majors from recent second-quarter conference calls, it has become clear that this dance is going to extend further than I originally thought.

I was early, and loaded on oil stocks when it was clear that unsustainable prices would lead to a necessary rally in independent oil companies with core acreage and balance sheets that assured their survival. Now, it seems that the market has caught up to me, with many of my core long-term holdings -- EOG Resources (EOG) , Cimarex Energy (XEC) , Continental Energy (CLR) and Hess (HES) -- having run much further than the current oil price would seem to imply. Most of these now have prices last seen when oil was above $60 a barrel, not $40.

It's at this point that I'm cutting back on all of these holdings.

What? Haven't I just proved that oil prices are absolutely destined to rebound three-fold from where they are trading now? Have I lost confidence in my thesis of triple-digit oil by the end of 2017? No.

But the suicide watch on oil producers has gone on far longer than I originally suspected. And I will back away from oil stocks that I think are now way ahead of themselves for this point in the recovery cycle.

I wanted to be first, or close to first, in getting in to these great oil winners.

Now, I want to be first, or close to it, to get out with some amazing profits -- and look for a better time to add again.

Get an email alert each time I write an article for Real Money. Click the "+Follow" next to my byline to this article.
TAGS: Investing | U.S. Equity | Energy | Markets | Stocks