Cyber-Ark Software Ltd. (CYBR) was featured on Jim Cramer's Mad Money show last night. In his second "Executive Decision" segment of the evening, Jim had a conversation with Udi Mokady, chairman and CEO of CyberArk Software that reported on Tuesday a 12-cents-a-share earnings beat that included a 56% increase in deferred revenue. Those are the numbers. In addition, theStreet.com's quantitative service upgraded CYBR to a buy today. Hey what about the charts and indicators? Let's check.

In this daily bar chart of CYBR, below, we can see a sideways consolidation pattern from September to early February. Starting in late February CYBR starts an impressive rally with only sideways or shallow corrections. In late July and early August the pattern changes. CYBR declined sharply and broke its June low. Prices managed to bounce to the underside of the 50-day moving average line but then gapped above it and made new highs. The higher highs and lower lows since June could be a broadening pattern. This pattern can be a bullish continuation pattern or a top reversal. CYBR is back above the rising 50-day line again and perhaps too far above the bullish 200-day moving average line. The daily On-Balance-Volume (OBV) line shows a bullish trend from early January and recently made a new high for the move up to confirm the advance. The price action and the volume data are bullish but the 12-day price momentum study shows equal highs in momentum in June and July and a lower high recently in August. When compared to the higher price highs this is a bearish divergence and suggests that the rally is slowing.

In this weekly bar chart of CYBR, below, we can see a mixed picture. Earlier this year prices broke out over the 2016 highs. Prices are above the rising 40-week moving average line. The weekly OBV line shows an uptrend from last August but a neutral trend the past two months or so. The weekly Moving Average Convergence Divergence (MACD) oscillator is poised to cross to the downside for a take profits sell signal.

In this Point and Figure chart of CYBR, below, we can see the price action without a price gap. An upside price target of near $94 is being projected. 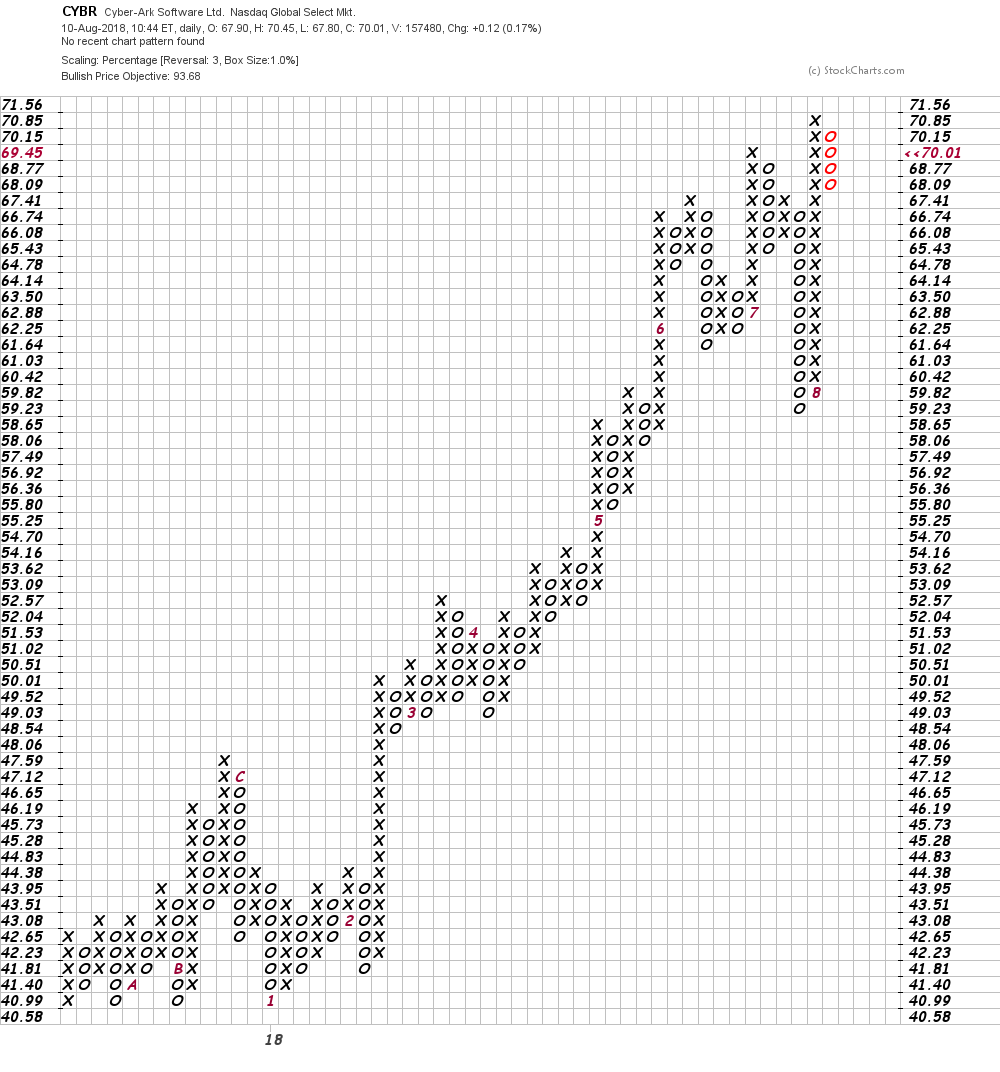 Bottom line strategy: CYBR could pull back into the $68-$66 area and then blast off to the upside or we could we witnessing a top reversal pattern. A really tough call even with experience. Being risk averse I want to see a little more price action before sticking my neck out.

I like them for the long-term as they've been beaten senseless.

Dow's Up, but It's Little Comfort

The ARK Innovation fund is down and so is the Russell 2000 fund, and many traders are frustrated.

While we favor the upside in ROKU, FUBO looks okay for a trade too.