By STEPHEN GUILFOYLE Aug 10, 2018 | 03:39 PM EDT
Stocks quotes in this article: MCHP, PLNT, DBX
For Whom The Bell Tolls
The closing bell had just rang its last. Traders, well most of them. headed for the exits. A few waited on the numbers. Numbers from Microchip Technology ( MCHP) . Oooh. Numbers from Planet Fitness ( PLNT) . Ahhh.... and wait for it... numbers from Dropbox ( DBX) . The knee-jerk was higher. The traders read the available information. One trader looked at me. He asked "What do you make of this?" The worm did not turn on a dime. That said... the worm did in fact turn.
The Good
Dropbox is primarily a data storage operation. A "cloud" data service operation that serves millions of users across 180 countries. The firm posted EPS of $0.11, a beat of four cents on revenue of $339.2M (+27.2% y/y). These next two sentences are key. Paying users ramped up to 11.9M, a 20.2% year over year increase. Average revenue per user also improved, from $116.66 to $111.19. In other words, these guys have a ballgame. Gross margins are improving. Levered Free Cash Flow is robust. The pile of cash that the firm is sitting on is a lot larger than the one they owe. There's just one thing. Okay, two things.
The Bad
Chief Operating Officer Dennis Woodside is leaving the firm. Obviously his presence mattered to a lot of folks. The firm has decided not to replace him, but to have two other executive level types share his responsibilities. They say no person is irreplaceable. I guess Woodside really is. There's more. The firm just went public in March, and is facing a lock up date. That date had previously been announced as September 18th. That date falls withing the firm's blackout period. The firm's restricted period now ends with the closing bell on Thursday August 23rd. Oooh. The market seems to be fearing a flood of sell orders. Let's think.
The Cavalry
RBC Capital rode in on their horse this morning. They upgraded the stock from Sector Perform to Outperform in response to earnings. Yeah, the name trades at something like 80 times forward looking earnings, but you know what... I don't hold cloud names to the same standards I would the stocks of corporations involved in more mature industries. RBC liked the earnings and so did I. Let's see if there a trade out there that allows us to take advantage of a weak name on a risk off day. Investors may hang on to their shares on days like this, but traders... They'll be flat everything risky for the weekend just in case Turkey sinks into the Black Sea by Sunday night. 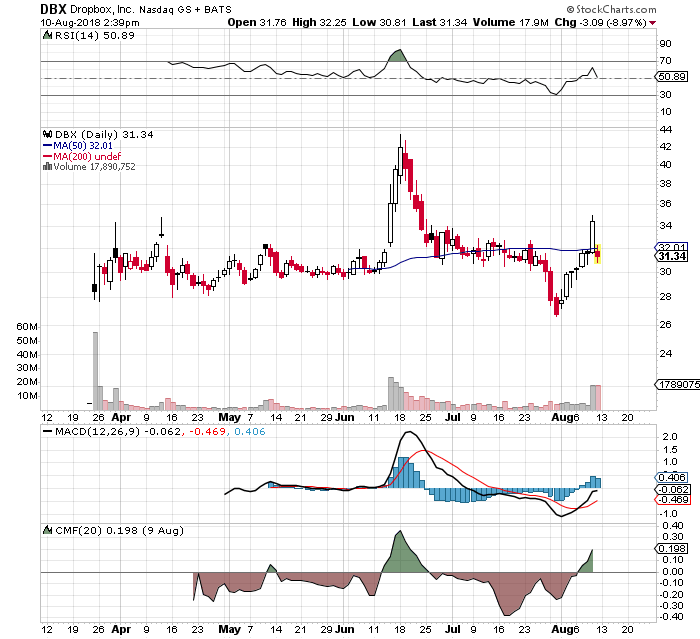 Not much I can do with this name from a technical perspective. Still, I smell opportunity. I think we may just have to infantry on this one. We're going to use our guts. Water, ammo, and gas masks only. Leave everything else here. If we get hungry, we'll kill something along the way.
Trade Idea (minimal lots)
-Purchase 100 shares at or close to the last sale of 31.30.
-Sell (write) one October 19th $38 call (last 1.09)
-Sell (write) one October 19th $29 put (last 2.00)
-Sell (write) one October 19th $27 put (last 1.30)
After these trades, the trader will own 100 shares at a net basis of 26.91. Oh look, that's nearly the all-time low of 26.61. I must be creative or something.
Best Case: The trader gets called away on his or her 100 shares in October with a net profit of 11.09.
Worst Case: The trader ends up have 100 shares put to him or her at both of the put side strikes (29 and 27). This leave the trade long 300 shares at an average equity price of 29.10. Owning 300 shares instead of 100 also increases the net basis to 27.46. The trick is understanding your tolerance for risk, and then finding a way to engineer purchases that cost you less than the shares trade for.
Do I fear the lock up date? I fear nothing. Let's say I am cognizant of the lock, but I also feel some urgency to grab some Dropbox at a discount while it's down.
Get an email alert each time I write an article for Real Money. Click the "+Follow" next to my byline to this article.
TAGS: Investing | U.S. Equity | Technology