You kind of thought that maybe you'd just ease on into the weekend, didn't you? Who could blame you. Well, forget it. While most of you were catching up on your beauty rest, the Turkish lira was collapsing versus the US dollar. Big time. At the morning's trough, the lira traded at more than 6 to the greenback. The Financial Times reported overnight that the European Central Bank is growing increasingly concerned that certain Eurozone lenders may be over-exposed to Turkish currency fluctuations. Spain's BBVA (BBVA) , Italy's UniCredit (UNCRY) , and BNP Paribas (BNPQY) of France are specifically named in the article as having drawn the scrutiny of the ECB's Single Supervisory Mechanism. In short, what a couple of days ago seemed like peripheral news is now front and center.

What does this mean to us? Dollar strength. Simply put, this means that the folks in Europe who get paid to watch these things feel that Turkish borrowers may be under-hedged against their home currency's weakness. If these borrowers should default on loans made in foreign currencies, that's where real trouble brews. FT reports that loans of this type make up roughly 40% of Turkish banking assets. Why this matters to a kid reading this article in Des Moines is because this has put downward pressure on Turkish sovereign debt. The Turkish ten year was giving up more than 20% at last glance. In chain reaction fashion, this puts downward pressure on the euro, and upward pressure on the safety found in the US dollar. The US Dollar Index (DXY) is more heavily weighted against the Euro than any other currency. See that 96 tag? This ramps up the bid side for US Treasuries as well. All this, in turn places downward pressure on commodities, and global equities including our own markets. Got it?

Much Ado About Tesla

Can this story get any more interesting? For those of you who were following the short position that I initiated in this name in anger back on Tuesday, and did not catch my updates... I am now flat Tesla (TSLA) . I bought back the shares yesterday morning for a pedestrian profit. While a more aggressive trader might have profited to a greater degree by holding out until late Thursday, this trader, who has managed to stick around for a few decades, was happy quite honestly to complete the trade effectively with his shirt intact.

The Elon Musk loving Twitter (TWTR) crowd did not take very kindly to a well published trader shorting their favorite name near the top of it's range. That crowd clearly does not understand what traders try to do for a living, and seems unable to comprehend that difference in opinion is what creates a market. So it is, when writing on a name that brings with it emotional baggage for the many, that one must accept that fact that the haters are waiting.

On Thursday afternoon, Bloomberg News cracked a story that the Securities and Exchange Commission was increasing it's already announced scrutiny of Tesla CEO Elon Musk's Tuesday tweet-storm regarding the privatization of his firm. Now, the SEC would look into whether or not Musk's tweet inferring information on funding was meant to be factual. This is in addition to what we already knew the SEC was looking at, which would include public dissemination of information covering manufacturing goals and sales targets. Bear in mind that SEC inquiries are common, and this does not mean anything in the way of a formal investigation is on the way.

Investors must understand that while many of us might not like it, the use of social media as a means for communication between a corporation and the public is not likely under scrutiny. This method of communication would find shelter under a prior ruling made after Netflix (NFLX) CEO Reed Hastings used Facebook (FB) as means of such communication back in 2012. The sticking points there would be that the firm must have already alerted the public that said firm is likely to communicate in this way, and that access must not be restricted.

The potential problem would be that the firm had not disclosed any sources for the financing of such a large deal. All they had done was issue a statement by the board indicating that the matter had been discussed.

Why Is Tesla Rallying Overnight?

After last night's close, CNBC reported that Tesla's Board of Directors would confer with financial advisors in order to discuss the "process to explore" what Musk had unveiled through Twitter on Tuesday. The most important part of what was reported last night is the following. The board is likely to ask the firm's CEO, Chairman, and largest shareholder to recuse himself from this review and hire his own team of advisors.

The positive vibe here is that the ball might just be rolling toward privatization. An even more positive vibe would be that the firm's board seems to understand that Musk's leadership is anything but. The man is obviously a genius, but is prone to erratic and questionable behavior. Character traits that are not helpful at times like this. 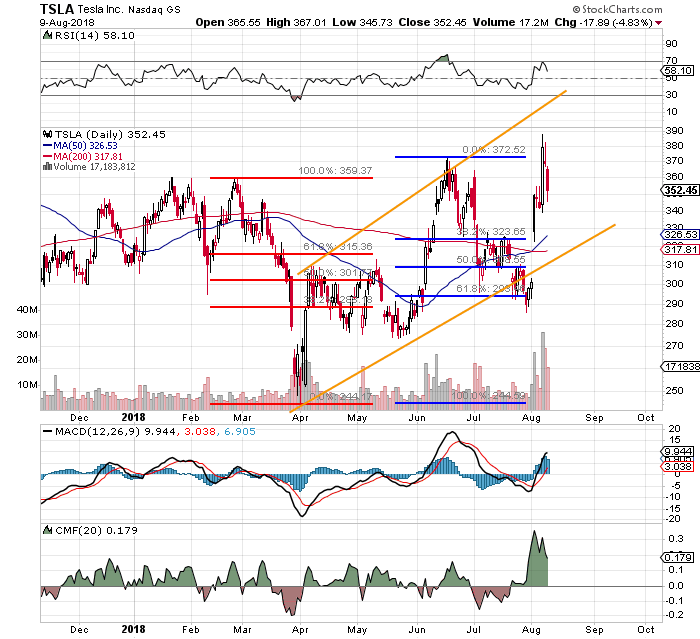 News events trump both fundamentals and technicals !!! I have been asked by followers this week about playing one of my favorite games... selling out of the money puts regarding Tesla. Are you guys crazy? I play that game in names that I am comfortable buying in lots of 100 shares at discounted levels that I have already decided would provide risk/reward probabilities that line up in my favor. Can you say that here?

Can any investor really with any confidence at all say that they think the firm will not go private at a significant premium? This stock has proven many of us wrong before. On the other side of that coin, can any among us honestly predict what comes of the SEC inquiry? Once the Feds are involved, I find some other place to speculate. For me, this one is over and out.

So, you want to speculate? I am long a name that I missed upon it's IPO last April. Good thing. The name is Spotify (SPOT) . What got me involved? Well, first, just in conversation with the TheStreet's rising star, Scott Gamm, a much younger, and more tech savvy individual than I, he told me how well the service worked. He loved it. Jim Cramer had mentioned on "Mad Money" the firm's ridiculously high conversion rate between the free version of the product and the subscription (pay) model. I listened. To both Scott and Jim. Then Q1 earnings hit the tape on May 2nd. The shares sold off, and the trader inside took over. Thank goodness.

Yesterday, Samsung announced a new partnership with Spotify, naming the streaming service as the firm's "go to music provider" across all platforms. That means smartphones, televisions, and the newest cool gadget thing...smart speakers. What this does for Samsung is position that firm better to take on Apple (AAPL) . What this does for Spotify is help defend the firm against Apple Music, which I also only hear good things about.

Fundamentally, there's a lot of ugly out there. I did call this one speculative. Margins are negative. PE ratios are negative. PEG ratio? EBITDA? All negative. The Current Ratio however stands at 1, and inventory is not really a thing here, so we won't worry about the Quick Ratio. For now, cash on hand is greater than total debt, meaning that these guys can afford to be a growth stock. 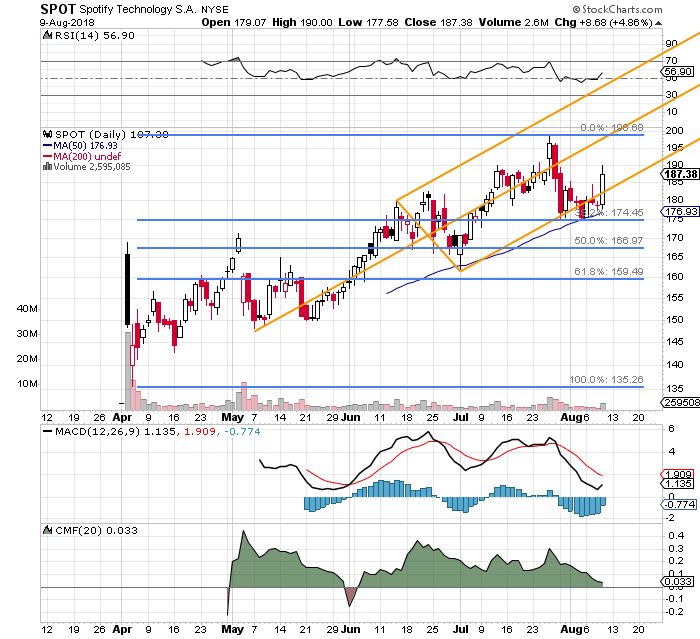 Did support show up at the 50 day SMA, or was it a 38.2% retracement off of the July highs? Maybe it was the lower bound of the Pitchfork that this stock obeyed. Slice it any way you want, the 175 area for support appears to be real. Perhaps there might be a few bucks to be made there at controlled risk.

First off, I would not purchase equity after running nearly 5% the day prior. What I would look to do, is maybe add the shares at a discount, or simply profit from the sale of out of the money put options. Speaking of options, there are a couple.

-October 19 $175 puts went out last night with a $5.20 bid. Getting stuck with the shares in October, this brings the traders net basis to $169.80. Not being assigned means the trader keeps $520. On top of that, should we see some profit taking in the equity space this morning, this bid should increase in value after the opening bell.

-October 19 $150 puts went out with a $1 bid last night. Less premium realized, but less protracted equity risk for the trader who has problems sleeping at night. Only you really know your own tolerance for risk, so put some thought into this.

(Facebook and Apple are holdings in Jim Cramer's Action Alerts PLUS member club. Want to be alerted before Jim Cramer buys or sells FB or AAPL? Learn more now.)

Get an email alert each time I write an article for Real Money. Click the "+Follow" next to my byline to this article.
TAGS: Investing | U.S. Equity | Transportation | Entertainment | Options | Stocks