Shares of Charter Communications (CHTR) have been flying high in recent months, especially since May, rising nearly vertical from the low $300s to their current extremes around $400. This latest thrust is broadly associated with speculation of a potential takeover bid from Altice NV (ATUS) , which some analysts have estimated to reach $200 billion.

While the speculators and deal mavens froth at the mouth, and the late joiners swarm in for any deal announced, let's explore the objective perspective that our DSE (decision support engine) brings to the table.

Members of our live-market Trading Room and DSE Alerts services have been following the CHTR pattern for several months, looking for the sideways structure from spring to lead to a rise above $350. That finally happened on July 27, and price has tested $410 this week. 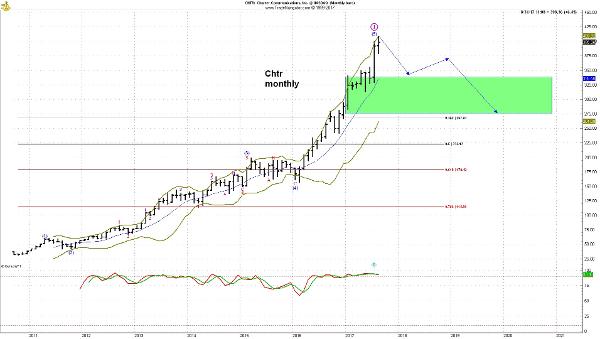 This is the monthly bar chart showing CHTR's amazing rise since coming public. The pattern can be labeled as complete, or will be after one more down/up sequence that would retest $375, then stretch toward $425 +/-$5 (best viewed in the daily bar chart, not shown here). Then, a multi-month to multi-year corrective decline would be expected, taking CHTR's price back into the high $200s, with additional bearish potential toward the low $200s. Therefore, the risk is to the $275 +/-$30 zone -- the lower end of the green buy box in the chart graphic above.

Not only would this price zone present a balance point to the vertical rise of the past year and a half, but also allow the most common Fibonacci retracement targets to be seen -- 38% to 50% of the prior trend's size. If, and only if, the $300 +/-$15 level contains the expected decline, once this finale concludes, the $450 zone would be expected to be tested again, before a deeper decline into the low $200s manifests.

So what would make Altice consider buying Charter now? The DSE doesn't see any justification from its interpretation of dozens of empirical indicators. However, there were plenty of makes-no-sense buyouts throughout 1999 that sucked in the deal chasers, and trapped them in fully-leveraged exuberance that they'd like to forget.

DSE is now warning to use sell stop protection at the $385 level, to avoid a surprising breakdown in potential deal-talk, which takes back the gains of the past year, as well as to sell into the $420s if that gift arrives.

For updates on this analysis, as well as other trading opportunities, try Ken Goldberg's DSE Alerts service for free for a couple of weeks, or contact him at support@dsetrading.com

Get an email alert each time I write an article for Real Money. Click the "+Follow" next to my byline to this article.
TAGS: Investing | U.S. Equity | Mergers and Acquisitions