Avon Products Inc. (AVP) reached a downside Point and Figure price target but that doesn't mean it has reached a bottom or that a bottom is at hand, unfortunately. Prices peaked back in 2004. Yes, 2004 not 2014, so declining prices are not new to this company.

Let's take a fresh look at the charts and indicators to see if there might be some light at the end of the tunnel.

In this daily bar chart of AVP, above, we can see a pattern of lower highs and lower lows since early October. Each selloff goes deeper while each bounce has less and less power behind it. Notice how the sideways price movements last about two to three months before another shot to the body takes AVP to a lower low. Both the 50-day moving average line and the slower-to-react 200-day moving average line are pointed down. A number of downside gaps have been left as traders and investors have been anxious sellers.

The On-Balance-Volume (OBV) line is interesting in that is shows a decline until June. From October to May the OBV line suggests that sellers are more aggressive. For some reason buyers turned more aggressive in June and July but their efforts were not rewarded with a rally, only another sideways pattern.

In the bottom panel of the chart is the 12-day momentum study, which shows lower highs from March to May to August as prices make lower lows. This is a bullish divergence but it hasn't resulted in any meaningful price improvement.

In this weekly bar chart of AVP, above, going back three years we can see a decline into late 2015 and a rally in which the price of AVP more than doubled. Unfortunately, the rally did not last long and prices have retraced nearly all the gains. The 40-week moving average line is bearish. The weekly OBV line has not shown significant aggressive buying and the weekly Moving Average Convergence Divergence (MACD) oscillator is below the zero line in a bearish configuration. 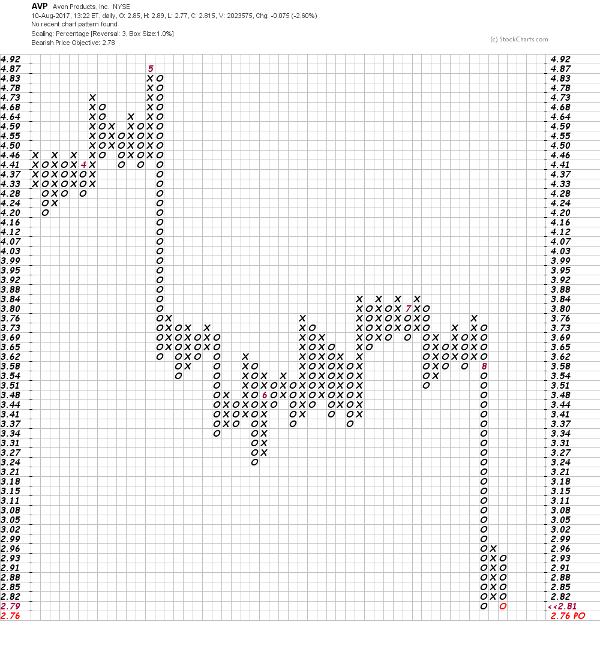 In this Point and Figure chart of AVP, above, we can see the breakdown without gaps. Prices reached a downside price target of $2.78 but that does not mean the risk is out of the stock nor does it mean a bottom is at hand.

Bottom line: A bottom is not a point in time but a process. Prices need to stabilize. Investors need to show an increased appetite to buy in a downtrend and bearish news doesn't push the stock lower. There are other signs of a bottom but AVP needs to start somewhere.

Get an email alert each time I write an article for Real Money. Click the "+Follow" next to my byline to this article.
TAGS: Investing | U.S. Equity | Consumer Discretionary | Consumer