Some days I prefer to build suspense, but today isn't one of those days. Shake Shack (SHAK) reports after the bell today, and I don't think there is a fantastic trade into the number; however, this stock had faded over the next one to two weeks five of the last six reports. The one exception came 15 months ago, but overall, I like those odds.

Speaking of odds, this has been an odd name in terms of earnings reaction. The estimate move here based on the options market comes in around 8% and we can see the trend has been increasing over the past few quarters.

The odd note here is how the maximum intraday move often comes in above the 8% mark, but the close has seldom exceeded it by much. The point of note is the move eight days later compared to the close.

Only once did we see very little move, and we have to go all the way back to the first report to find that. Additionally, we have the earlier note of fading to consider here.

The trade here is post-earnings in my view, and there are two strategies to consider. First, a trader could look to add a short-term straddle shortly before tomorrow's close.

The stock has shown the tendency to move quite a bit, even after we've seen the initial earnings reaction. The largest benefit to this approach is the implied volatility associated with options will plummet as we've removed the unknown catalyst driving it higher.

The second strategy is to play a fade. The longer-term weekly chart of SHAK looks coiled here, as the Bollinger Bands are squeezing together. Bears are preventing a breakout today, and I see that as a benefit. 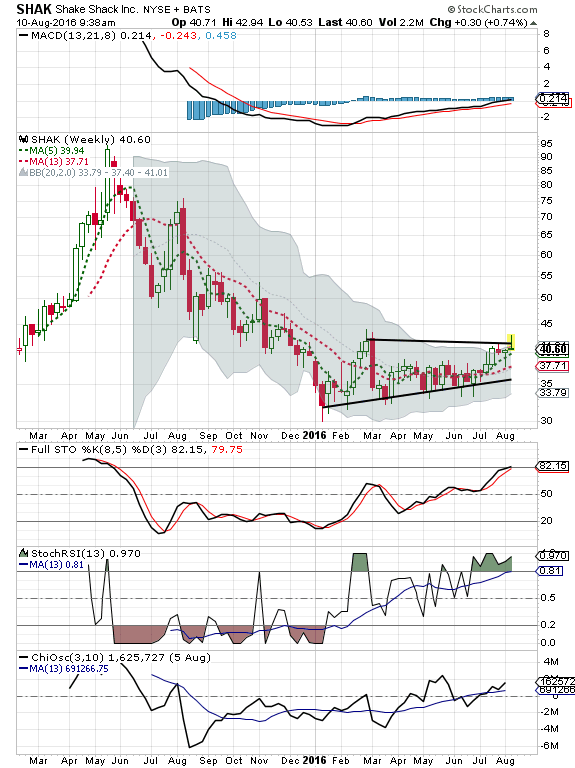 If I were playing pre-earnings, I would be targeting a move in the 9-10% range; however, I feel the best risk-reward lies in the post-earnings trade.

Get an email alert each time I write an article for Real Money. Click the "+Follow" next to my byline to this article.
TAGS: Investing | U.S. Equity | Consumer Staples | Markets | Consumer | Earnings | How-to | Options | Stocks