CarMax Inc. (KMX) was discussed on Jim Cramer's "Mad Money" show last evening. If you haven't visited a CarMax location near you to check out the inventory, you probably have noticed their ads on television. This morning let's kick the tires of the charts and indicators.

In this daily bar chart of KMX, below, we can see an interesting chart pattern and some bullish indicators. A quick look at this chart and I would bet that many chart watchers would suggest that they see a cup-and-handle pattern. Prices do scallop around in a saucer-looking pattern and the price action in late June looks like a breakout that is followed by a pullback or handle.

However, after the last June retracement the advance has yet to get in gear, which makes me think this is not a cup and handle. Often you see the volume pattern being heavier on the right side or half of the cup, but I do not see any difference. The daily On-Balance-Volume (OBV) line does show a positive trend from March, but since late June the OBV line is flat, which does not shout "breakout" to me. Prices are above the 200-day moving average line, but the slope of the line is neutral or flat. Meanwhile, KMX has been testing the rising 50-day moving average line. The Moving Average Convergence Divergence (MACD) oscillator has been in a corrective posture since the middle of June and is just now poised to turn back up to a go-long signal.

In this weekly bar chart of KMX, below, we have a mixed picture. Price have been in an uptrend from early 2016 but the indicators are not in a strong position. Prices are above the 40-week moving average line but the slope of the line is barely positive. The weekly OBV line shows a rise from March but it is below the high reached in September and October of last year. The MACD oscillator is above the zero line but narrowing.

In this Point and Figure chart of KMX, below, we can see that prices reached a target of $75. A rally to $79.05 is needed to improve this chart and a decline to $72.27 is likely to weaken it. 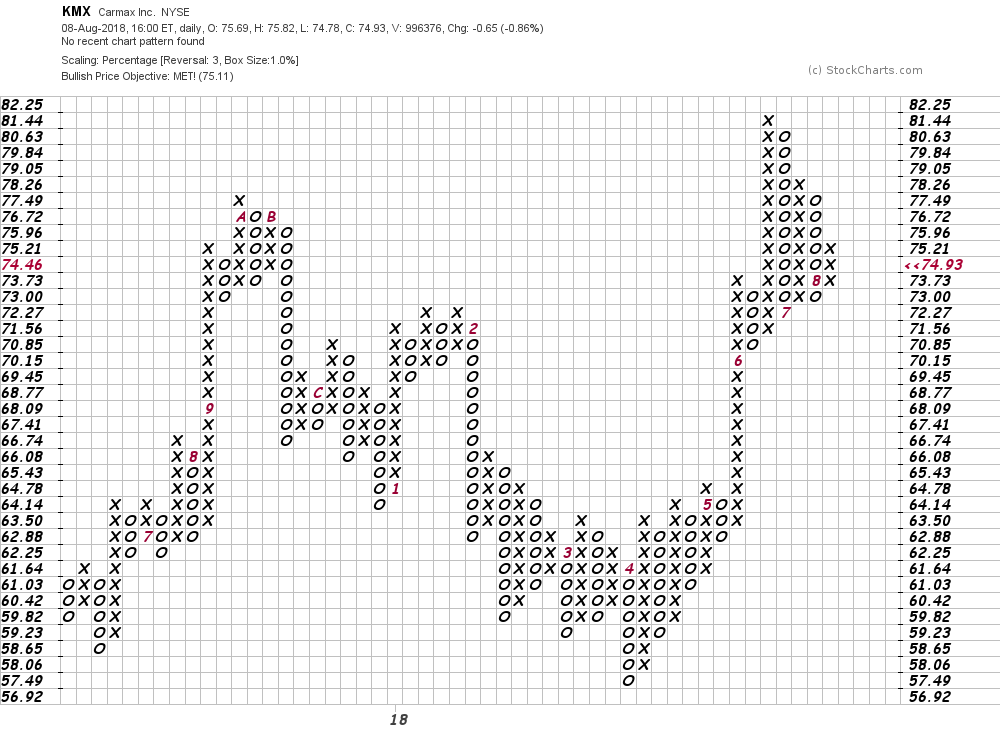 Bottom line strategy: KMX is likely to trade sideways between $80 and $72 until we see better signs of more aggressive buying.

Get an email alert each time I write an article for Real Money. Click the "+Follow" next to my byline to this article.
TAGS: Investing | U.S. Equity | Consumer Discretionary | Transportation | How-to | Mad Money | Risk Management | Stocks

Boeing's Recent Rebound Is Not Likely to Last for Long

Often times this kind of 'knee jerk' rebound is not sustainable

Let's take a close look at Delta's charts and come up with a plan.

Can FedEx Drive Up?

FedEx is poised for a rebound if the bad news is fully discounted.

The Charts of Royal Caribbean Cruises Have Taken on Water

Investors may now need to think about permanent changes to how we vacation.

Dine Brands Global and Royal Caribbean looked cheap a few days ago yet fell a lot more on Thursday, which makes timing an entry challenging.