Anyone notice last night's fourth-quarter Twenty-First Century Fox (FOXA) earnings release? Overall... impressive. By segment? Still impressive, except maybe for television. That slice of data showed revenue of $1.14 billion, an increase of 13.9% year-on-year. However, the numbers change for the worse when looked at through the prism of OIBDA (Operating Income Before Depreciation and Amortization), which is similar in formula to EBITDA (by using net operating income as a starting point, instead of net earnings that could include non-operating income). Television for Fox, as measured through an OIBDA filter printed at $106 million, down 22% y/y. This despite the studios having created more than their fair share of top-10 TV shows, thanks to rising costs associated with the broadcast of high-profile sporting events.

Now, flash back to earlier this week, when Walt Disney (DIS) reported. For the moment, forget that Disney is set to acquire a basket of Fox assets outside of News and Sports. For Disney's third quarter, by segment... Media Networks posted revenue of $6.16 billion, up 5% y/y, while printing operating revenue of $1.82 billion (-1% y/y).

CEO Bob Iger was sharp in the post-earnings call. In fact, I thought he was very sharp. Iger placed the focus on the firm's development of its organic streaming services. ESPN Plus is apparently an early success. Yours truly is an early subscriber, and a happy one at that. Iger stresses that what is being referred to in the media as "Disneyflix" is on the way, and is a priority. For now, with the deals already in place, Disney content is somewhat scattered about. Iger says that the service will in price "reflect the lower volume of content versus a Netflix (NFLX) ." Don't forget that ABC and Fox each own 30% of Hulu. That will put Disney clearly in charge of that service. Hmm, maybe Netflix should be scared. Even Walmart (WMT) is gunning for them now.

Gently Down The Stream

So, where is the potential for traders like us to score the largest take in this space? I like DIS going forward. I am long the shares. I have shorted and remain short a long series of cascading puts at discount strikes and varying expiration dates. It would take a genuine collapse for me to even worry about my net basis in this name. A solid investment? I believe so. Super-sized increases? Not likely. Disney has been an absolute ATM for shareholders, rising a rough 12% over the past three months, despite the negative reaction to these earnings.

From a speculative point of view, where will gains come from that outperform the marketplace by double-digit percentage points? The easy answer would be to stick with what has worked in the past. Say an Amazon (AMZN) , or an Nvidia (NVDA) . Heck, Amazon is good at everything, and the world (and cloud) runs on quality semiconductors. Speaking of "The Cloud," I am not going to be getting out of my favorites there, such as Adobe (ADBE) and Salesforce (CRM) , but both face current resistance. I think retail investors might just want to look at something that in dollar terms might be more affordable, yet still speculative in nature. Key word, speculative. Don't come crying if we get run over. Key word: we. I'm in the foxhole next to you.

What a wonderfully volatile name this is. I have probably been asked about this one more often than any other stock since making this name my secret weapon in my monthly trading note back in June. The stock peaked at $46.23 that month after trading as low as $15.30 in the secondary market in the days after the IPO in April. By the way, post-IPO is when I bought the name, which is why I have been slow to react to the dramatic slide in the shares that we have seen since mid-June.

What I did as a trader was to isolate this name from the rest of my actively traded portfolios in order to keep the volatility of this one stock from distracting me on a daily or even weekly basis. Now, the name, a subsidiary of Baidu (BIDU) , seems to trade up and down with the Shanghai Composite, which itself trades up and down (mostly down) on trade news involving China's relationship with the U.S.

I have often stated that I will either sell this name at $200 or zero, whichever comes first. There's some truth to that flippant statement, despite the fact that Goldman Sachs downgraded the stock and slapped a $30 price target on IQ last week.

By the way, the domestic Chinese market for a Netflix-type service is probably still quite immature. Much of the problem for us is that though revenue was reported up 42.5% for the second quarter, that revenue is measured in Renminbi. Have you ever seen a pea roll off of a table? Yeah, well if you've ever been to boot camp, or attended day camp as an adolescent then you've already imagined what it would look like. 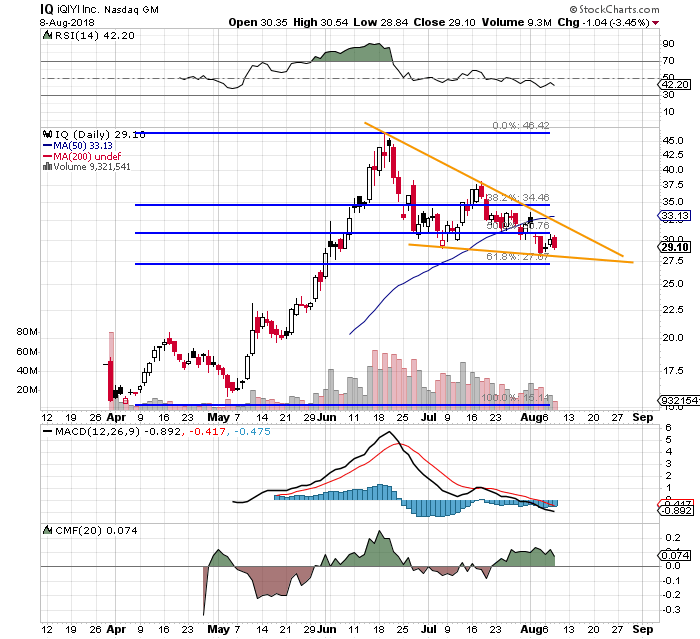 Fibonacci support, if it shows, will show between $27 and $27.50. This is also the area where the two trend lines would likely collide. Money Flow has been improving, yet both the daily Moving Average Convergence Divergence and Relative Strength offer us little.

For a reversal to follow my script, we'll need to see an upside break of resistance within a month's time, and it will have to happen on a spike in volume. Trade war headlines, and what looks like a slowing Chinese economy, might just provide the weakness necessary for one looking to enter. Don't be fooled. This stock is headline sensitive.

In order to get in on this trade at the price that I have laid out for you, and within the timeline that I anticipate, this is how it's done.

This reduces net basis to $27.85, but also reduces the potential for super-sized gains if the breakout occurs prior to expiration of the call option.

This currently in-the-money put will leave you with a net basis of $27.02 if exercised.

Or, for the slightly more timid among you:

If not exercised, the premium will buy a nice sit down lunch for you and a friend. If exercised, your net basis falls to $25.85.

This one ticks me off a little. I am not angry at anyone, except myself. Perhaps, it's my own paranoia, but I don't like to enter orders ahead of time for fear that sniper algorithms and the high-frequency freaks will spot my order and clog the lines. As an old open-outcry trader, you might say that I feel some resentment toward the modern forces that in my opinion have badly perverted the purity of price discovery.

Long story short. I could smell a good second quarter for ROKU coming. Call it gut. I don't know. My intent was to buy a few shares in the seconds ahead of the bell. I got a little busy trying to cover my Tesla (TSLA) short at price higher than I will likely get this morning (my basis is $373.12 on that one), and then my fingers were not fast enough to get the ROKU purchase in. You know, I once turned a triple play (two put-outs and an assist) in Little League, so I guess life really does even out.

ROKU closed at $47.25. Then, the firm broke even for the second quarter, which beat EPS expectations by fifteen cents. Revenue printed up 57.4%. The firm raised full-year guidance for revenue. Account activation soared 46%. Streaming hours ramped 57%, and this is the biggie... average revenue per user rose by 48%, Nicely executed, ROKU.

The last sale that I see with my window still black with the dark of night is $53.10. I wanted in. I am not buying it here, or at least not here this morning. However, I am not one to be without a plan. Let's see if we can figure this out.

You can see that ROKU pretty clearly colored within the Fibonacci lines twice. Once retracing the move higher over the winter, and once retracing the decline over the spring. Then the Pitchfork formed into summer. The name obeyed its technicals. When the bell rings this morning, momentum will move price toward the center of the Pitchfork's lower chamber. Relative Strength and the daily MACD will confirm what Money Flow already told you.

We may have to be patient in order to get the right price for this one, unless you want to staple your order to your forehead and walk into a buzz-saw. My plan is to let the bell ring. Let the equity and options markets open. Last night $47 puts expiring this Friday were still paying $3.21. That price will be closer to zero this morning. ROKU reports again in early November.

My plan is to watch premiums for puts expiring on October 19 (the date just gives me chills even 31 years later). If I see a premium that would bring my net basis (if assigned) below last night's close, I am likely to make a sale. If not, or if the stock behaves poorly in the early going, I'll just wait. Nothing wrong with a "nothing done" if it doesn't feel right. In that case, maybe I buy equity.

Get an email alert each time I write an article for Real Money. Click the "+Follow" next to my byline to this article.
TAGS: Investing | U.S. Equity | Technology | Economic Data | Earnings | China | Markets | Economy | Newsletter | Options | Risk Management | Short-selling | Stocks