TripAdvisor (TRIP) is being pressured today but weak stock prices are not new to this company. If you look at the three-year weekly chart (second chart below) you will see a three-year decline. Prices have been declining since making a double top at $110 in 2014.

Is there any chance that prices have reached a level where investors may find it attractive from the long side? Let's check the charts and indicators.

In this daily bar chart of TRIP, below, we can see that prices are trading below the declining 50-day simple moving average line and the declining 200-day line. Prices have rallied above the 50-day average in December/January and May but each of these periods of strength was not long lasting. The daily On-Balance-Volume (OBV) line has been a decline the past twelve months signaling that sellers of TRIP have been more aggressive. There is a small May/June bullish divergence between the higher lows in momentum and the lower lows in price. This divergence is probably not big enough or significant enough to generate an upside reversal.

In this weekly chart of TRIP, below, we can see how the declining 40-week moving average line has defined the downtrend the past three years. Prices are still below the average line. The weekly OBV line tells and interesting story. The OBV line rose from late 2014 until late 2016. If buyers of TRIP were more aggressive over this time period they have not been successful. The OBV line did decline from November to April which matches the price action. The OBV line has improved the past four months signaling more aggressive buying again. In the lower panel is the 12-week momentum study which shows a bullish divergence since December -- much more important than the daily chart.

In this Point and Figure chart of TRIP, below, we can see decline followed by consolidation pattern followed by decline again. On this chart TRIP is, so far, holding its extreme low but a downside price target of $31 is visible. 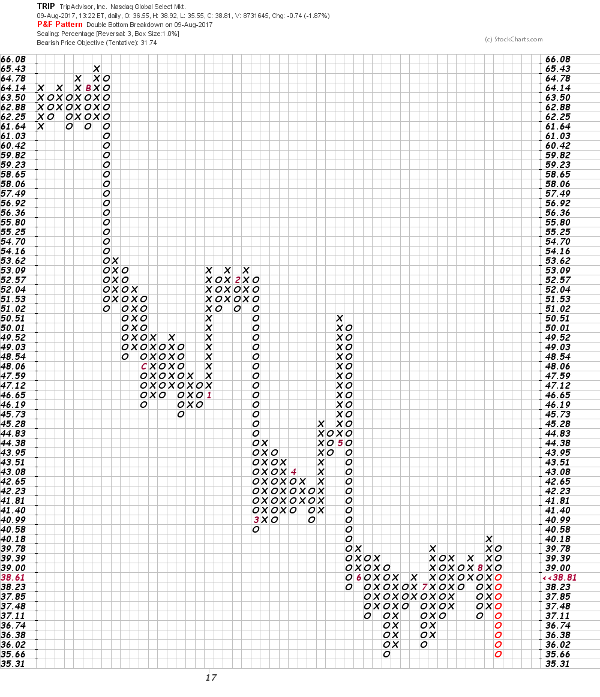 Bottom line -- the movement of the OBV line (daily and weekly), and a weekly bullish divergence are keeping me from being a bear on TRIP. TRIP may not rally much in the short-run but I think a stay-cation for a few weeks would not hurt.

Get an email alert each time I write an article for Real Money. Click the "+Follow" next to my byline to this article.
TAGS: Investing | U.S. Equity | Transportation | Gaming | Stocks

The speculative runup in FCEL seems to be over. Approach with caution.

Boeing's Charts May Lose Some Altitude

BA may be a buy on this weakness. The charts show some pressure in the short-term, but longer-term, the skies are clearing.