I do a lot of preparation for the week ahead on Sunday nights. Then as the week progresses, I adapt to the news flow, as well as market behavior. This past Sunday, when looking at Wednesday morning, I expected that I might end up covering the Walt Disney (DIS) earnings call. Once again as usual, I feel that the Bob Iger call was a lot better than the actual data. After the firm reported numbers that missed industry expectations for both the top and bottom lines, analysts wanted to hear about developing direct-to-consumer products such as ESPN Plus and the yet to be released streaming service -- like Netflix (NFLX) .

Iger is "thrilled with the results of the shareholder vote" regarding the Fox (FOXA) deal. Disney shares rallied off of their after-hours lows, even as CFO Christine McCarthy mentioned suspending the firm's corporate repurchase program until there is an improvement in its credit rating. Yup.. That man sure knows how to do things the correct way. There are other CEOs out there, however, who are not so concerned with properly disseminating news events that will impact the marketplace.

Around midday on Tuesday, shares of Tesla  (TSLA) started to show some real life, after the Financial Times reported that the Saudi sovereign wealth fund had taken a 3% to 5% stake in the name. You might have thought that to be enough news for one firm, for one afternoon. No.

Many folks first assumed that the Twitter (TWTR) account of Tesla CEO Elon Musk had been hacked. Myself among them. It had not been. At 12:48 p.m. ET, Musk tweeted, "Am considering taking Tesla private at $420. Funding secured." Not only had nothing been filed with appropriate authorities, but the price of $420 would be a premium of 19% over where the stock was trading at that time. Musk is the firm's largest shareholder. Musk had purchased shares in the open marketplace within the last two months. The $420 price for a buy-out was seen at first as a joke, given both Musk's reputation for erratic behavior and the marijuana-usage implications of both the time 4:20 p.m. and the date 4/20. Hmm.

Musk kept on tweeting. I can tell you this. As a trader who had spent more than three decades on the trading floor of the NYSE, it is not at all unusual for a Chief Executive to call the exchange where a firm is domiciled and tell them that they should consider halting trading in that name because the firm is going to release material news.

Musk's behavior yesterday, highly unprofessional in my opinion, both made and cost a lot of people a lot of money. The chief beneficiary would be Musk himself, as holder of approximately 20% of the firm. Not everyone has equal access to Twitter. As far as we can tell, there was no 8-K filed with the SEC prior to Musk's tweet storm, and a posting on the firm's website came after the fact.

I woke up yesterday flat Tesla. I had no intention of really ever getting involved in the name again. Though I see many reasons for the shares to trade at much lower market prices, I had learned -- so I thought -- to simply not play with that particular fire. Over the course of this firm's existence, I had lost money in two of the three times that I had held a short position. I had also made money both times that I had held a long position.

Although TSLA did beat expectations for second-quarter revenue when it reported on August 1 -- and kind of met production goals (at times) in a most sloppy and inconsistent fashion -- the bull case (just my opinion) is based largely on the size of the short position. As of mid-July, roughly 34.72 million shares of TSLA were held in short positions. That's an astounding 29.6% of the float, gang. In a flash of undisciplined anger, which I consider uncharacteristic for me (I hope), I added to that short interest yesterday. Yes, I take offense when you make a mockery of our financial marketplace. Don't worry about me. The position is small. I may have been angry. I did not suddenly become stupid. Again, I hope.

In my opinion... the firm is not worth anything close to $420. Obviously, if the firm is going to leave the CEO in place, then it is far better served in private where the man's gross lack of anything resembling quality leadership will no longer garner as much attention. For crying out loud, this attention-seeking man even got into a fight with one of the rescue divers in Thailand.

I read a lot of smart people. I read Doug Kass. I read Jim Collins. I read everything I can gather. One item noted by all was the $920 million worth of convertible debt coming due this March. At a share price of $360, the firm can convert the debt into shares. At prices below that, the firm must settle those securities with cash. That would most likely require yet another capital raise.

As far as we can tell, none of the investment banks that immediately come to mind have made statements -- or been mentioned. There is that Saudi stake, but that was supposedly for somewhere between $1.7 billion to $2.9 billion. That could be a source, but the numbers would have to be many, many times larger than that.

Until I am convinced that going private for Tesla is realistic, and more than simply the impatient ramblings of a child, this for me remains a troubled operation. The firm sat on $2.2 billion worth of cash at quarter's end versus total debt of $11.6 billion. Levered free cash flow for the past year still runs with a negative number, and still ends with a "B."

The firm's current and quick ratios make the other domestic auto manufacturers (who will also sell you electric vehicles) seem far better prepared to meet short-to-medium-term obligations in comparison. I may or may not cover my short today, as I am not going to give this name a chance to hurt me badly. That said, I only shorted the name on yesterday's spike, so I may still get to the plate. I am only looking for a base hit. 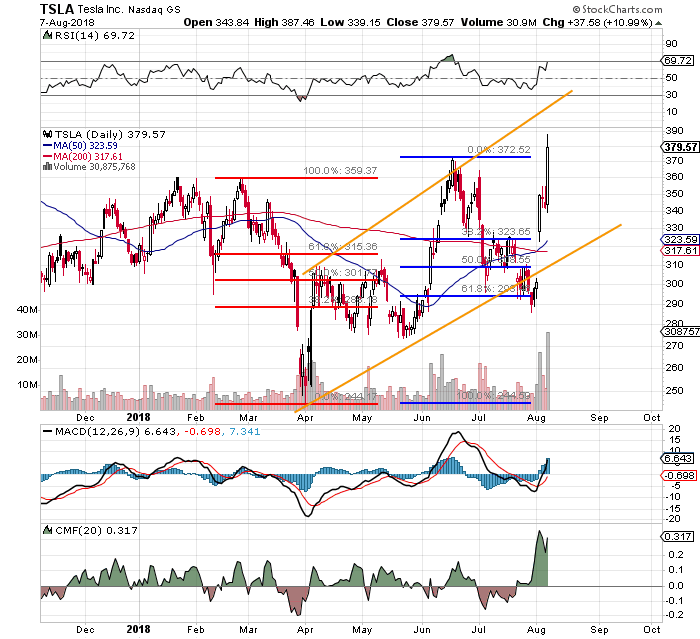 As you can see, the technicals are all quite favorable at this time. Relative Strength, the daily Moving Average Convergence Divergence, Money Flow, a golden cross, a rising series of highs, and a "sort of" rising series of lows, all point to a name on the rise. If actual news breaks that credibly supports the idea of Tesla going private at $420, then these indicators would have all been accurate.

As the firm's memo that was released after the tweet storm -- and after the stock had been halted -- indicates, no final decision on a buyout has been made. Yeah. Thought so. I have no inside information. I have no idea what happens going forward. I feel that it is truly impossible to place a target price on Tesla, given the mix of attractive technicals and awful fundamentals.

All Elon Musk really did yesterday, besides behaving oddly, was to force a short squeeze. If there is no real news here, some big folks are going to be seriously angry. That is really all we know.

Get an email alert each time I write an article for Real Money. Click the "+Follow" next to my byline to this article.
TAGS: Investing | Global Equity | Economic Data | Earnings | Economy | Newsletter | Politics

Plus, a look at Wednesday's wishy-washy market action, the Treasury yield curve, Chevron's coming earnings and Lael Brainard's possible exit from the Fed.

You May Be Bullish Now But It's Still a Bear Market

Maybe the bullish sentiment we are seeing can carry stocks across the finish line at least for January. We'll see.

Has the New Bull Market Started?

There are a few factors that will determine whether the bull is charging again, and most aren't arguing in its favor just yet.