Maybe you watched Mad Money last night, or recorded it to watch today. For a second time, Jim Cramer sat down with Bracken Darrell, president and CEO of Logitech International (LOGI) . LOGI is a computer accessory maker that is now embracing gaming and eSports (I typed that on my Logitech keyboard). So we know a number of their products -- what do the charts and indicators look like? Let's check.

In this daily bar chart of LOGI, below, we can see that prices have rallied from an early December nadir. The move higher has not been smooth and steady, with a number of downward corrections and setbacks along the way. LOGI broke below the rising 200-day moving average line in December and April, but managed to recover.

The daily On-Balance-Volume (OBV) line did not improve until January, and shows a possible peak in July. The Moving Average Convergence Divergence (MACD) oscillator is above the zero line, but has been in a "take-profits mode" most of the time since early February.

In this weekly bar chart of LOGI, below, we have a mixed picture going back three years. The rising 40-week moving average line has done a good job in defining the uptrend and prices are still above that indicator.

The weekly OBV line has been weakening since May of 2017, but does show some improvement from April of this year. The weekly MACD oscillator has been above the zero line for nearly all of the last three years, but has narrowed in recent weeks towards a possible take-profits sell signal.

In this Point and Figure chart of LOGI, below, we can see that prices have met an upside price target. A decline to $42.68 will weaken this chart. 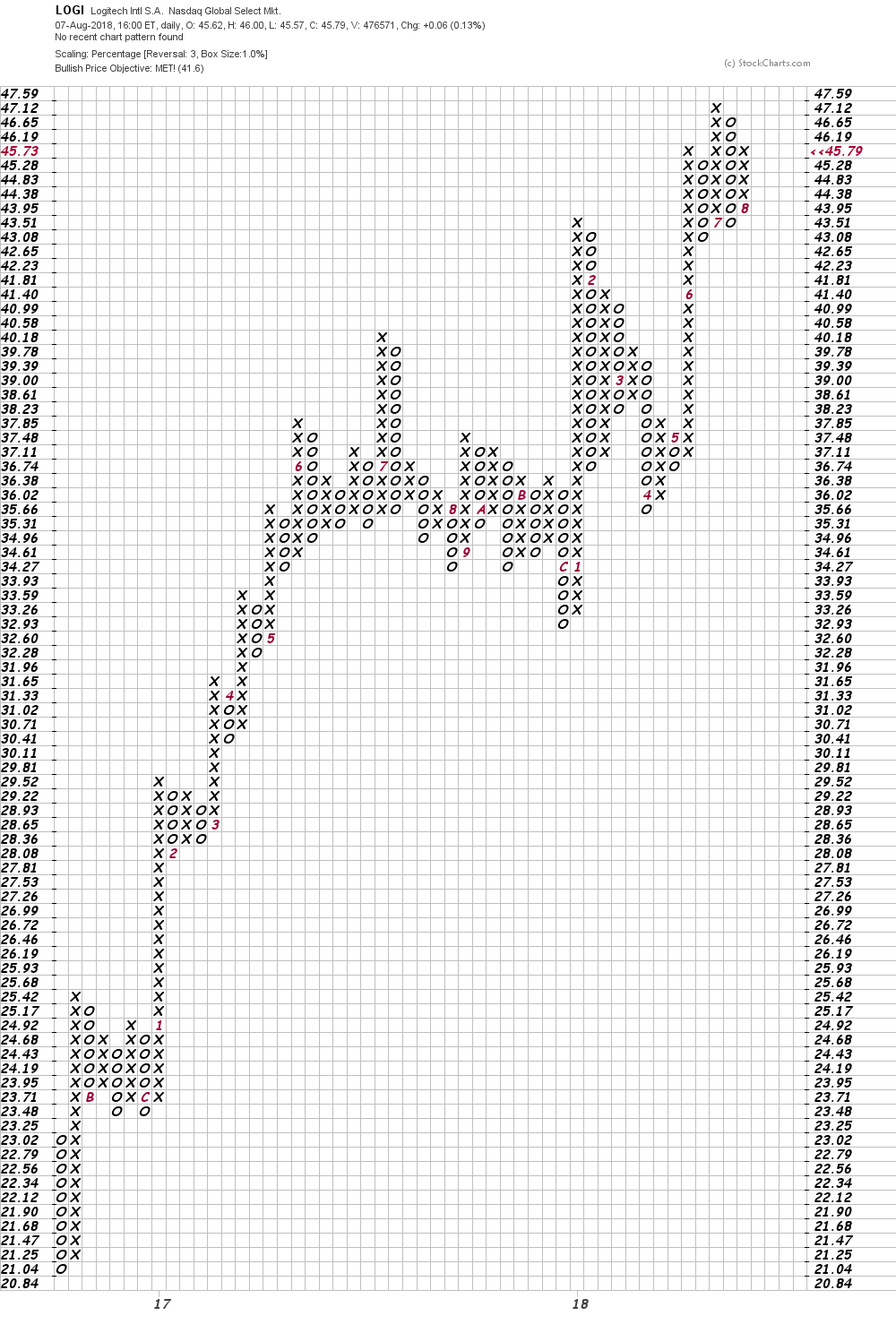 Bottom line: All three of our charts (above) have mixed signals, plus no further upside price targets at this time. It is not terrible, but LOGI is likely to trade sideways in the weeks ahead.

Get an email alert each time I write an article for Real Money. Click the "+Follow" next to my byline to this article.
TAGS: Investing | U.S. Equity | Technology | Mad Money

'A' Is for Buying: Agilent Is Resuming Its Uptrend

Here's how traders can play the stock.

SNAP's Cracking, but Will It Pop?

After a rough few days, Snap Inc. appears to be getting some bets that the stock could pop.