For three months in a row now, the nonfarm payroll number has completely stumped Wall Street.

Aside from experiencing a major shock of some sort, like a Lehman event, economies don't just change overnight. This is what makes people changing opinions about an economy because of an incredibly volatile and unpredictable number like nonfarm payrolls seem odd. But since the Fed and markets, in general, take their cue from the payroll data, we have no choice but to play along. The good news is that we can combine payroll data with other metrics to see how the economy is truly doing and to form a more consistent view.

While nonfarm payroll data have been all over the road for the last three months, weekly initial jobless claims data have been saying the labor market is strong the whole time. Since 1970, weekly claims have averaged 368,884, with the most recent week being just 269,000. 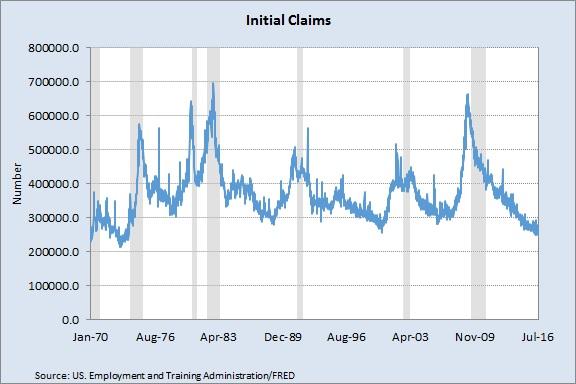 Add in the fact that the labor force has almost doubled in size since 1970, gets us a current claims levels at a historical low. As I have touched on before, claims data are a near real-time gauge of the health of highly cyclical industries. For many people, unemployment insurance is their only source of income when work ends, so you can be sure that claims will be filed. Even with the loss of energy and mining jobs over the last couple years, we have actually seen claims data drift lower. This is proof of people being able to find work in other areas and the overall sound health of our labor market.

Looking inside of the payroll data we got Friday, we can see another consistent trend, which is the growth of sustainable services jobs. While financial media often describes services jobs as being low paying or that all the jobs being created are waiters and bartenders, this is simply not the case. The chart below shows the growth of professional and business services (PBS), education and health services (EHS), leisure and hospitality (LHS), construction and manufacturing jobs as a percentage of the total workforce. 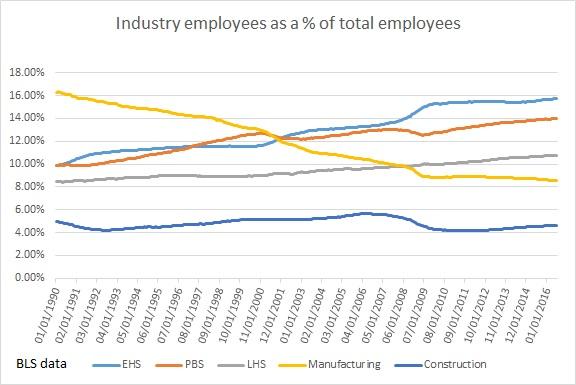 As you can see, EHS and PBS are the fastest growing and make up 30% of the total workforce. We also see that construction has been a fairly constant proportion of the workforce while LHS has not been the source of most job growth as many in financial media have stated. This chart also underlies the importance of the healthy ISM Services report we got this week, which showed solid gains in its new orders component.

Combining claims data, nonfarm payrolls and the ISM services data and it paints a clear picture of the U.S. economy. Right now this picture is looking pretty good and sustainable. Unfortunately, someday it will not look so good, But at least we have the tools that will tell us when things start to go out of focus.

Seabridge Gold Is Ready to Climb Much Higher

The charts and indicators of SA are bullish.

What Is China Up to Behind the Scenes?

The Chinese are trying to spur action in their equity market as they look to catch up to the U.S. equity market.