Summer is going to the dogs. Literally.

The season's blockbuster, The Secret Life of Pets, centers around Max, a Jack Russell terrier, who lives a luxurious life in Manhattan before getting lost in the city. The animated feature was the biggest earner during its opening weekend, beating Disney's (DIS) Finding Dory, and has already earned $502.1 million worldwide to date. Due to the box office success, Comcast's (CMCSA) Universal Studios plans to capitalize on the wild popularity of Pets with a sequel set to be released in 2018.

TheStreet's Jim Cramer, whose Action Alerts PLUS portfolio holds Comcast, said in June that the movie's success plays into a larger investment theme: the humanization of pets.

"This is one of the single best secular trends out there, which is the pet sleeping with you, feeding the pet food that you would want natural and organic, the idea that you take care of your pet," Cramer said.

Even the Rio Summer Olympics' mascot, Vinicius, is a mixture of all the Brazilian animals. This is reflective of the country's abundance and diverse animal life. While Vinicus may be modeled on wild animals, Brazil had the fourth-largest pet population in the world at of the end of 2013. According to Abinpet, the Brazilian Association of Pet Products Industry, the pets industry, in general, including food, care, vet and services, should reach $19.2 billion Brazilian real in revenue for 2016, an increase of 6.7% since last year.

"One reason for this growth is that, increasingly, the animals are consider members of the family, and with that, consumer looks for more diversified products for your pets," said Abinpet's CEO José Edson Galvão de France.

In the U.S., 95% of pet owners currently consider their pets to be part of the family, Nielson, the global information and measurement company, reported in March. That's up 7 points from 2007.

And this trend only continues to rise. According to the American Pet Products Association, U.S. pet industry expenditures have grown 66% since 2005. APPA estimates that Americans will spend $62.75 billion on their pets. That's up from the $60.28 billion spent in 2015. For this year, APPA expects food to be the biggest segment within the industry, with an estimated $24.01 billion. Vet care and supplies/OTC medicine are anticipated to be the second- and third-largest areas of spending.

On CNBC's "Mad Money," Cramer took a closer look at the stocks behind the trend -- breaking it down into three areas: pet food, vet care/pet supplies and diversified.

Beginning with the segment that is expected to dominate this trend this year, Blue Buffalo Pet Products (BUFF) and Freshpet (FRPT) are two pure plays in this area.

Blue Buffalo is a premium pet food brand that makes natural food and treats for both dogs and cats. The company went public a little more than a year ago on July 22, 2015, and opened for trading at $20. After reaching a high of $28.80 and a low of $15.50 during this time span, the stock is now trading at around $25.60.

On July 5, the pet food maker also held a secondary offering of 17.25 million shares of common stock, which were offered at a price of $22.

Blue Buffalo is set to report second-quarter results on Aug. 10. Analysts are anticipating earnings of $0.17 a share on revenue of $280.8 million. According to Bloomberg data, 75% of analysts believe the stock is a Buy, while the remaining 25% have it at Hold.

Freshpet is the other pure play in this area, making fresh, refrigerated dog and cat food. The company reported earnings Thursday and saw its net sales rise 16% to $33 million for the second quarter, driven by an increase in Freshpet Fridge store locations. The company posted a net loss of $3.2 million, compared with a net loss of $2.2 million for the quarter in 2015. Freshpet reiterated its forward guidance of net sales exceeding $137 million and adjusted earnings before interest, taxes, depreciation and amortization (EBITDA) of $18.5 million.

Analysts with Wedbush said in a research note Friday that while Freshpet's second-quarter results came in mixed vs. expectations, they continue to remain optimistic on the company's initiatives going forward. "We believe that FRPT's differentiated products and 'store-within-a-store' retail model will continue to partially insulate the company from rising levels of premium pet competition," the analysts said.

But Cramer noted on "Mad Money" that while Freshpet had faster revenue growth than Blue Buffalo, up 16.3% in the latest quarter, the company's numbers are decelerating, down from 23% in the previous quarter and 35% growth in the quarter prior.

"Not exactly something to get excited about," Cramer said. Meanwhile, Blue Buffalo's revenue and earnings growth have been accelerating in recent quarters.

A Cramer-favorite IDEXX (IDXX) reported stellar second-quarter results last Tuesday. The results were so great that Nicholas Jansen with Raymond James called it a "perfect quarter across the board" during a conference call following the earnings report. Second-quarter earnings were up 23%, coming in at $0.74 per share. The company achieved organic revenue growth of 13% for the period. The growth was mainly driven by accelerated companion animal group gains and strong growth in its water business. The water-testing-solutions business provides products to ensure the quality of water.

CEO Johnathan Ayers said during the conference call that the water business has "one of the most extraordinary business models" with 95% recurring revenue, 99.9% customer retention, mid-40s operating margin and organic growth in the high single-digit category.

Based on the strong year-to-date performance and positive momentum, CFO Brian McKeon said IDEXX increased its 2016 full-year revenue guidance by $25 million, which implies an organic growth outlook of about 10% to 11.5%.

And Ayers is expecting continued strength in the market, with favorable broad trends.

"We've done some research that suggests that millennials love their pets even more than their parents, which is pretty amazing given what Baby Boomers have done in terms of taking care of their pets," Ayers said.

Meanwhile, Zoetis (ZTS) , the maker of medicines, vaccines and diagnostic tests for pets and livestock, caught the eye of Real Money's technical analyst Bruce Kamich, who thinks that its upside potential is great. (Zoetis has also garnered attention of billionaire investor William Ackman, whose hedge fund Pershing Square owns 4% of the company).

When looking at the daily chart, Kamich says it is easy to see that the stock was bought every time it dipped down to the $38 to $39 area last August, September, October, February and March. He also noted that prices are above the rising 50-day moving average line and the 200-day line, adding that the "positive slopes of these averages tell us that the trend is up."

When looking at the weekly chart, Kamich said, "Resistance above the market is not meaningful."

He added that there is a two-year consolidation on this chart with prices breaking out on the upside. He was also impressed when looking at the point-and-figure chart, where he can see an "impressive" price target of $71. 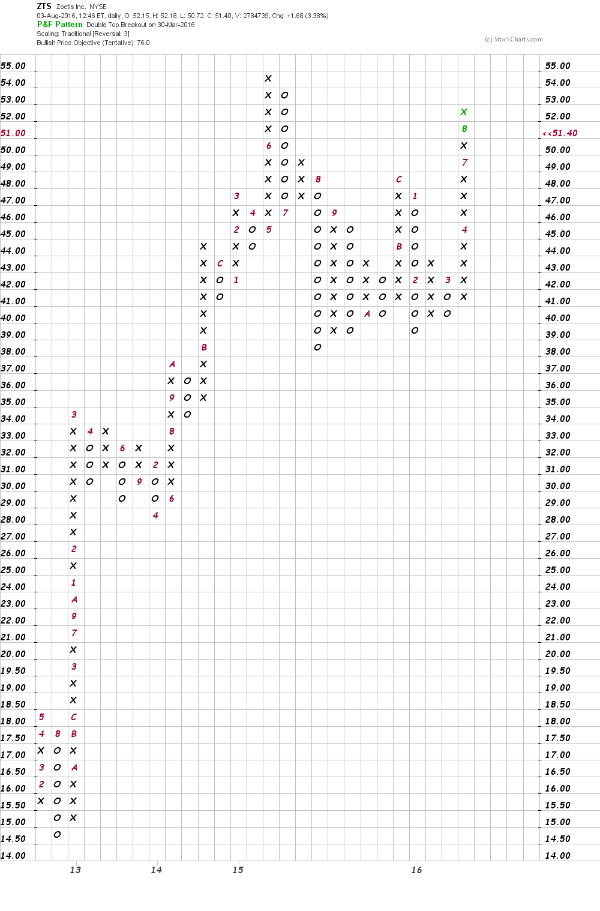 Zoetis reported top- and bottom-line beats for its second quarter last Wednesday. The company posted earnings of $0.49 on revenue of $1.21 billion. CEO Juan Alaix said normalized organic operational growth is 9%, excluding the impact of foreign exchange and acquisitions. Its companion animal products division saw the most growth, up 15%.

PetMed Express (PETS) is another company at play in this area. The Trifecta Stocks holding has had a solid year so far, up more than 16%. Portfolio managers Chris Versace and Bob Lang wrote in a note to subscribers Friday that after the company's upbeat June quarterly results, they are looking ahead to the July retail sales report, particularly the non-retail store category, which reflects online commerce. They maintained their price target of $23 per share, but added, "we would suggest subscribers new and old not commit new capital at current levels." But they noted that the annual dividend yield of 3.7% at the current levels is enticing.

Finally, VCA  (WOOF) , which stands for Veterinary Centers of America, runs more than 700 animal hospitals nationwide. The company reported revenue growth of 19.1% for the second quarter, which exceeded analysts with Credit Suisse's expectations of 16.7%. WOOF quarterly earnings of $0.87 also beat their estimates of $0.83 on better revenues and profitability. The Credit Suisse analysts said in a July research note following the earnings report that they expect momentum in the shares to continue. They raised their price target by $2 to $76.

"VCA benefits directly a people are willing to spend more on keeping their pets healthy and ensuring they live longer," Cramer said. "That's why the stock's up 225% since the end of 2012, including a terrific 24% gain year to date."

There are clearly several ways to get into this strong, secular theme, and these pure plays offer a unique insight into a steadily expanding segment that definitely has some bark to it.

Get an email alert each time I write an article for Real Money. Click the "+Follow" next to my byline to this article.
TAGS: Investing | U.S. Equity | Consumer Staples | Healthcare | Consumer Discretionary | Earnings