We know, without a doubt in the world, that oil prices are unsustainable -- here at $42, at $52, probably at $62 or $72, too. But here's the problem with oil: It's fighting its own death spiral, and we're on the outside, trying to figure out the timing of it all.

What do I mean by this? I mean the oil companies, particularly the majors with their added dividend burdens, are using financial markets to keep their juggling balls in the air, waiting around for oil prices to recover and deliver a positive cash flow, instead of the desperately negative ones they're all registering.

Have a look at this one chart from Bloomberg on debt from the majors, which has doubled since the start of 2014: 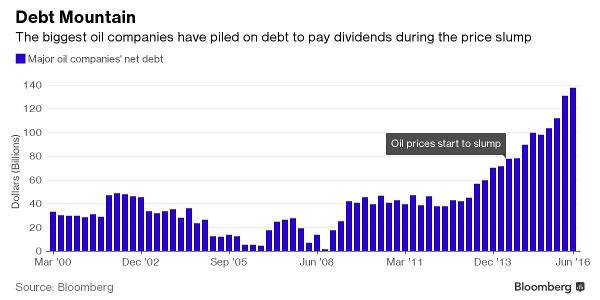 When the majors don't take in as much as they have to pay out, they must go to the credit markets to make up the difference. Take Chevron (CVX) , for example: It made $3.7 billion in the first two quarters of 2016, but paid out $4 billion in dividends as well as spending an additional $10 billion in development exploration. To make up the difference, Chevron came up with a plan to sell $15 billion worth of assets, including a $5 billion sale of Asian assets announced Thursday. Even with the plan to sell assets, Chevron had to borrow an additional $6.4 billion. But because interest rates are so low, many inside Chevron, and indeed many analysts, don't find this a particularly worrying trend.

For Chevron, or indeed any of the majors, freeing themselves of this choking debt load (provided interest rates and bond ratings from Moody's and S&P hold steady) would require an oil price that sustains itself much higher than we have today -- at least twice as high. Meanwhile, all of the majors are playing a very dangerous game of "Keep calm and pump on" -- continuing to promise higher realized margins on crude operations while simultaneously promising increased production for the next two years.

And there's the mess. Increasing production from oil majors, which shareholders and Wall Street like to see, is the high-bar hurdle that needs to be jumped to reduce global gluts and force crude prices higher. It is the Catch-22 that is piling up the debt loads of oil companies that can't seem to avoid hurting themselves.

This isn't just a problem for the majors. Even small independents, many of them already bankrupt, continue to pump oil at a loss in an attempt to deliver some value to bondholders and keep assets in the working category for "Hail Mary" hopes of private investment bailouts. All of this has made oil slow to rebalance, even causing a "mid-bust" seasonal stockpile increase that has sent crude again toward $40 a barrel.

It can't last, of course. The majors will first cut dividends, as Conoco-Phillips (COP) did. Then they will cut capex budgets even more, further destroying the industry's ability to replace oil reserves going into 2018 and beyond. Debt loads will ultimately affect credit ratings and stock prices, which will put even more pressure on cash flow. And if the Federal Reserve decides to raise rates after the election...

We're reaching an incredible tipping point for oil, one that won't be answered with a rally up to $52 followed by your regularly scheduled fall drift lower. No, when this debt bubble and bankruptcy production game implodes upon itself, it will deliver the quickest and most brutal rally in oil that the world has ever seen. It won't happen for a while yet, as this game has a few more innings left to run. Moreover, it seems a lot more blood in the oil world clearly needs to spill, maybe even including one or two majors (!).

As each of the majors has reported -- quite horribly -- for this second quarter, it is clear they are willing to sacrifice longer-term production power for short-term production gains and massively increased debt loads. Because of this, I find it more and more difficult to recommend any of the majors as currently good investments -- particularly strong dividend payers like Chevron and BP (BP) . Exxon Mobil (XOM) , with its lighter dividend load, is marginally better.

The safest investment play in other historic downturns of oil has always been the majors. This time, I'm not so sure that's the right place to put your investment dollar.

Get an email alert each time I write an article for Real Money. Click the "+Follow" next to my byline to this article.
TAGS: Commodities | Markets | Energy | Investing | Stocks