It was an early morning last January down in Florida when, with a giant iced coffee in hand, I popped into a large presentation hall to listen to a key Mattress Firm (MFRM) executive speak to a room of about five people. The low turnout was to be expected -- despite being in the news over the past year for its big Sleepy's acquisition and weak stock-price performance, the business of selling mattresses and box springs isn't exactly sexy.

Nevertheless, I sat in and listened to one of the most confusing presentations of my career. The slide deck was so amped up with numbers, projections and pretty charts that I had only one takeaway: Mattress Firm would have a challenging time over the next three years -- integrating a whopping 80 Sleepy's distribution centers and rebannering stores, while also focusing on the core business of selling mattresses across a dizzying array of different brands.

Since then, that general view appears to have played out. I watched a local Sleepy's during the spring take over five months to be converted into a Mattress Firm. The exterior of the building came out great, but the location is horrible -- which underscores a sense on Wall Street that Mattress Firm didn't truly know the extent of Sleepy's issues.

Nevertheless, here comes South African firm Steinhoff International -- paying a 115% premium for a business in organized chaos. It appears to be a trophy purchase by a foreign retailer that wants some respect from the American audience -- and of course, a presence in the U.S. market.

I think Steinhoff is making a big mistake with this one, in terms of premium paid. But apparently they are willing to play the very long view, making a bet that there will be a millennial-led boom in bed and bedding sales over the next 10 years. It's not a far-fetched idea, as buying a bed has taken a back seat to purchasing a new couch and cool appliances during the U.S. housing recovery (see chart, below). 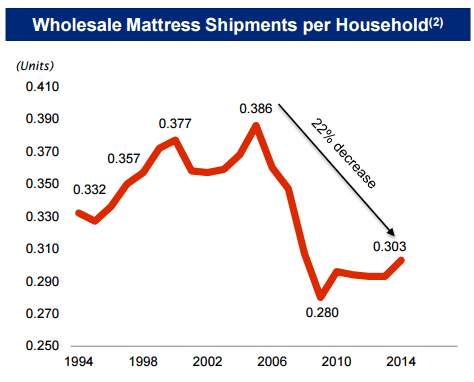 Here is the key question that arises for me in the face of this zany deal: Is foreign money circling distressed retail assets?

Make no mistake, there is a very long list of retailers I would characterize as distressed -- as a result of the shift online, mismanagement in dealing with that shift, and how all of this has affected their businesses.

Here are a few characteristics of a present-day distressed retailer:

I think the time has come to seriously consider Macy's  (M) as a prime target for foreign money that wants to make a big splash in the U.S. market -- and is willing to pay through the nose to make it happen.

With Macy's, one must acknowledge that near-term results will likely continue to be very weak -- second-quarter results set for release this week will no doubt be soft -- but that some exposure to the stock could be quite lucrative if a credible deal surfaces. For all its problems, Macy's has some bedrock elements that are likely of serious interest to would-be foreign buyers.

If an outfit like Mattress Firm could be scooped up, it is easy to believe that someone, somewhere, is presently sniffing around Macy's. With a management transition underway and the stock price under pressure, it would be wise to strike now on Macy's.