Shares of Allergan  (AGN) fell Monday following the release of the company's second-quarter earnings results. Earnings per share of $3.35 were ahead of Wall Street's expectations by $0.07. However, revenue of $3.7 billion was short of expectations for the period. For the year, the company expects earnings between $13.75 and $14.20 per share, short of the market's expectations of $14.21 per share.

"We view the shares as fundamentally undervalued and largely misunderstood," wrote Action Alerts PLUS co-managers Jim Cramer and Jack Mohr today. "The misunderstanding is twofold: inaccurate consensus estimates and a lack of defined shareholder base.

"Future growth will be driven by several key new product launches and a broad late-stage pipeline. CEO Brent Saunders bases every decision in the context of maximizing shareholder value creation," Cramer and Mohr continued. "The $33.4 billion net cash windfall following the sale of its generics business to Teva (TEVA) is fodder for takeover speculation."

David Peltier of Dividend Stock Advisor advised investors to avoid two oil plays based on a note from Deutsche Bank over the weekend.

"First, Alon USA Energy (ALJ)  is a refiner and marketer of gasoline and diesel fuel. The stock has lost 48% year to date and recently changed hands around $7.58. Current consensus estimates call for the company to lose money both in 2016 and next year," Peltier wrote.

"Next, CVR Energy  (CVI)  is a transportation fuel refiner that has lost 63% year to date and recently changed hands around $14.22. Even though the company is expected to lose money this year and earn just 32 cents a share in 2017, it currently pays a quarterly dividend of 50 cents a share (14% yield). Investors at the close of trading on Aug. 3 qualified for the next payment on Aug. 15," Peltier concluded.

Finally, Alphabet's  (GOOGL) chart was the subject of a chart analysis from Trifecta Stocks co-managers Chris Versace and Bob Lang.

"Without quibbling, we can see Google managed to make a new all-time closing high last week. After selling off some post earnings (just a brief consolidation), the stair-step pattern continues.

"Since hitting the 'Brexit' lows around $680, this stock has vaulted higher, rising some 19% in just six weeks.

"This is the reason for the outstanding relative strength. The low hit on June 27 was on very strong turnover, indicating a capitulation event occurred (weak hands distributing stocks into the hands of big funds, institutions and strong hands)." 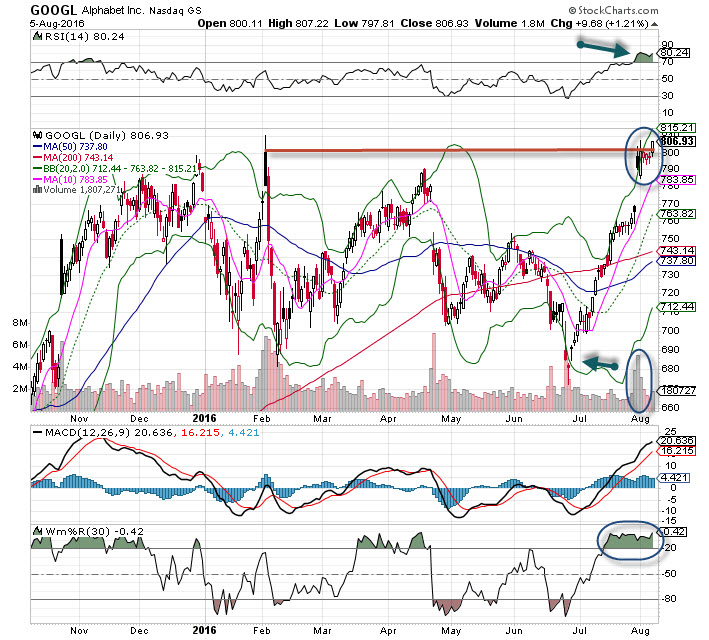 Get an email alert each time I write an article for Real Money. Click the "+Follow" next to my byline to this article.
TAGS: Investing | U.S. Equity | Healthcare | Technology | Jim Cramer