I caught a huge break when I was a junior in high school. I had been a newspaper-kid (The term was paperboy at the time, but there were girls among us, including my sister) for the New York Daily News since I had been 11 years old. I kind of hated that job. It wasn't so much getting up a few hours before school, and collecting payments from customers who tried to avoid me deep into the night. It was the newspaper strike of 1978 that forced my hand. You see, back in the day, newspaper kids really ran their own businesses. You had to buy the papers in bulk at a discount from a Daily News representative and then sell them to your own customers.

Well, the New York Post and the New York Times went on strike with the Daily News in 1978. I was fourteen, and a senior guy at this point. No paper. No income. The guys who ran that section of Queens for the Daily News worked the phones for days. First we tried a scab paper. That thing failed immediately. Then we had an answer. Trucks would come down from New England and drop off in giant bundles -- The Boston Herald -- in front of my parents row-house. Eureka! My customers would not be shut out.

So, I agreed to buy the Boston Herald and deliver that paper. Only one thing. Half of my customers thought I was a fire-breathing go-getter and still paid me. The other half did not want a Boston newspaper. I had already paid for them. I was fourteen, and had already experienced the results of having made a poor business decision. So then I looked for a new job. A real job. Put applications everywhere. Nothing.. Until my 16th birthday. Then, my local McDonald's (MCD) and a Barclay's Bank on the very same block both offered me a job. I said yes to both of them.

I agreed to clean the bank and its parking lot before school -- it was a drug infested (angel dust) area, so I had to kick out the junkies -- and then I would flip burgers and wipe tables after school. I grew to love working at McDonald's. The place was almost like a social club. Everyone was friends and we even had sports teams. We would play other McDonald's locations in tackle football, softball and roller hockey. What could be better than that? The nuns at my school even used to let me out early on days that my hours conflicted with last period.

I still love McDonald's. In fact, I ate dinner there with my wife on Sunday after 5 p.m. Mass. Have you tried that new Quarter Pounder? If you have not, since the firm went to fresh beef, then you have never tried the darned thing. It's awesome. Give it a shot. I'm hooked.

In Common With Warren Buffett

A couple of months back, it was reported by CNBC that Warren Buffett stops by his local McDonald's every day for breakfast on his way to work. Like clockwork. I may not go that far, but I can understand it. Berkshire Hathaway (BRK.A) , (BRK.B) reported a remarkable spike in earnings over this past weekend. The firm beat expectations for revenue on growth of 8.6% year over year. The firm's insurance business rebounded significantly.

As for investment, Berkshire has never stopped adding to its holdings in Apple (AAPL) . That stock now accounts for slightly more than 26% of Berkshire's holdings, if my math is correct. Rounding out the firms' top five holdings would be American Express (AXP) , Bank of America (BAC) , Coca-Cola (KO) , and Wells Fargo (WFC) . Where is McDonald's? Nowhere. That is the answer. In fact, if you look over Berkshire's 13F filing at the end of the first quarter, the name is not listed. Know what? I'm flat McDonald's too. This is as much for me as it is for Warren. Let's analyze.

Fundamentally speaking, the name trades at 19.1x forward-looking earnings, the S&P 500 at 17.6x, so the stock is not necessarily cheap at first glance. Back in July, the firm reported second-quarter earnings that beat expectations on both the top and bottom lines. Comp sales showed strength globally, but disappointed domestically. Levered Free Cash Flow is strong. Though the firm is saddled with $31 billion in total debt, its current ratio is under control. Short interest is insignificant, so not a factor, also not an artificial source of support.

I will tell you flat out what I do not like. Second-quarter revenue showed an 11.6% year-on-year decline. In fact, while EPS continues to grow, the three-year sales rate is still a negative number. Heck, book value per share is a negative number. Are there positives? Of course. Margins remain healthy, and they pay you 2.6% just to own the darned shares. On top of that, these shares are down nearly 9% year to date. Now, we are going to have to look at a chart (or two). 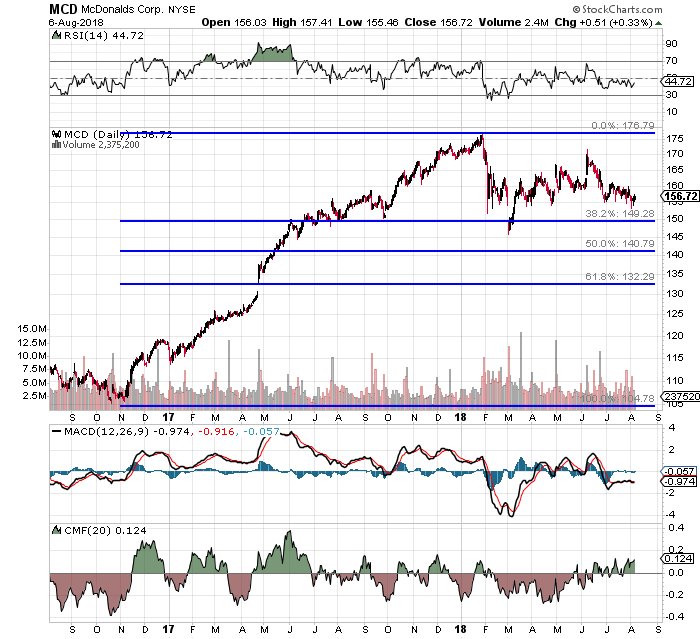 Well, it's plain to see that the guys writing the algorithms can also read Fibonacci levels. 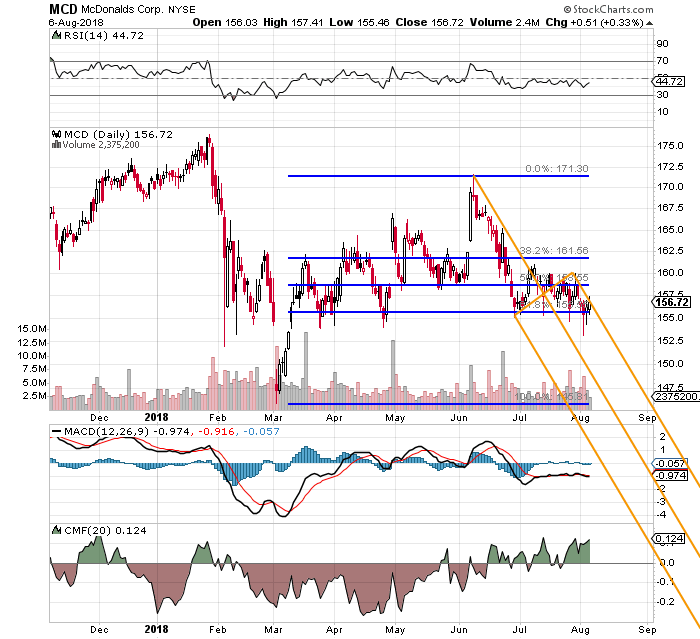 Oddly, Money Flow has been solid, while the stock has not only been stuck in low gear, it's been in reverse this summer. You can see the name hanging onto a 61.8% retracement of the early March through early June move by a thread. In fact, the spot has been pierced without actually breaking several times now.

A Pitchfork has developed that forced me, as an investor, to accept the possibility that the share price might have to move lower before I decide that the risk is in my favor as an equity investor. I don't really give a darn about Warren Buffett's money. Now, we're talking about my money -- and it's my decision. The average of 14 Wall Street analysts who have set 12-month price targets for MCD is a lofty $183.73. the lowest among them is $165.

Guess what? I don't care about them either. Good chance that few of them have skin in the game, or even ever will. Buffett is known as a value investor. Buffet is obviously well aware of the McDonald's product. Buffett has not taken a bite. At these prices, that makes sense. However, Buffett is huge. I am not. When Buffet moves through the jungle, he leaves a trail of flattened vegetation that many can and will follow. People like us can still move swiftly and silently. They don't see us coming or going.

Recent support has been a sloppy $155, I don't trust it. The 2018 low is around $147. I don't know about you guys, but I am going to engineer a net basis in that neighborhood -- or at least get paid to try. So, let's rock... and then let's go eat some of those delicious new Quarter Pounders. Even better without the cheese, dudes.

1) Equity? Not at this last sale, sport.

Worst Case: The stock collapses. The trader is forced to buy 100 shares at each strike price in October for an average of $145. less the average premium of $1.10 for a net basis of $143.90. In other words, you get paid decent dough to expose yourself to equity risk almost three bucks below the stock's low of the year.

Get an email alert each time I write an article for Real Money. Click the "+Follow" next to my byline to this article.
TAGS: Investing | Global Equity | Consumer Discretionary | Consumer Staples | Economic Data | Earnings | Economy | Newsletter | Politics | Stocks