Nokia Corp. ADR  (NOK) peaked in May and has established a downtrend. With a number of sell signals on the charts the long side of NOK looks like the wrong way to play this security. Let's check.

In this daily bar chart of NOK, below, we can see that prices have closed below the declining 200-day moving average line. The slope of the shorter 50-day moving average line turned bearish in late June. The daily On-Balance-Volume (OBV) line has been in a downward move the past twelve months which was only interrupted by a one-month counter trend move in February. A weak OBV line tells me that sellers of NOK have been acting more aggressively than buyers. The trend-following Moving Average Convergence Divergence (MACD) oscillator is bearish and has been below the zero line since early June.

In this weekly bar chart of NOK, below, going back three years, we can see a pattern of lower highs with a sideways phase since 2017. A break of the 2018 could precipitate a test of $4.00 and a resumption of the longer-term downtrend. Prices are below the flat 40-week moving average line. The weekly OBV line shows weakness the past three months and the MACD oscillator is poised to issue a new sell signal as it is close to crossing below the zero line.

In this Point and Figure chart of NOK, below, we can see a long-term downtrend. The distribution pattern of the past year is generating a possible downside price target of just $1.50. 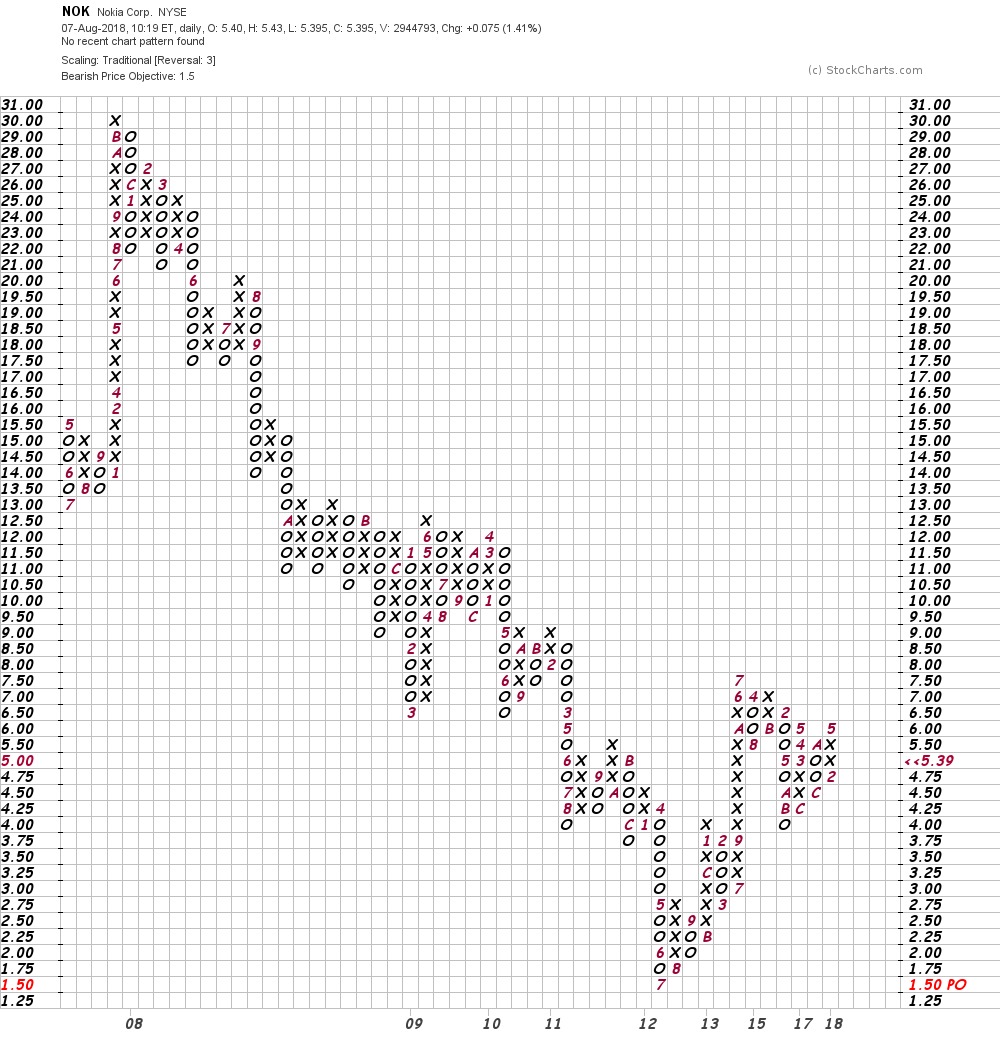 Bottom line strategy: Jim Cramer did not like NOK in the Lightning Round last night and certainly the charts look bearish. A close below $5.25 is likely to precipitate further losses this year.

Get an email alert each time I write an article for Real Money. Click the "+Follow" next to my byline to this article.
TAGS: Investing | U.S. Equity | Technology | Telecom Services | Mad Money | Stocks

I'm Not in a Hurray to Buy Anything for a Trade Yet, but Consider Comcast

CMCSA has a pretty good look on the daily and weekly chart.

Tech company MRVL gets quantitative downgrade and has weakening charts.