KLA-Tencor (KLAC) has weakened over the past two months but prices are rebounding today after a test of the rising 200-day moving average line. The key question at this juncture is whether the correction is over and we should be buyers on a retest or would we rather see a new basing pattern or consolidation pattern before probing the long side. Tough call in this never-ending bull market.

Let's see if the charts and indicators can do anything to answer these questions.

In this daily bar chart of KLAC, below, we can see the strong rise from $70 back in September to near $110 in early June. Corrections along the way were short lived. Prices made a quick reversal in June without signs of distribution and weakening momentum. Volume did not pick up significantly on the decline and the daily On-Balance-Volume (OBV) line continued to rise to a late July peak (so far). If volume increases on the rally up from $90 it would be a sign that more aggressive buying has returned. There is a bullish divergence between the lower lows in price from early July to early August and equal lows in the momentum study. This does not look like a significant divergence so it is a reason to be a little cautious.

In this weekly bar chart of KLAC, below we can see that prices closed below the rising 40-week moving average line. A strong rally this week could push prices back above the 40-week average. The weekly OBV line has been level to slightly higher the past four months while the MACD oscillator has been in a bearish mode and is a far distance from a fresh buy signal.

In this point and figure chart of KLAC, below, we can see the uptrend with the various consolidations along the way. Prices were pointed down until today. A deeper decline to $88.19 will refresh the downtrend but it will need a rally to $102.38 to turn this chart bullish again. 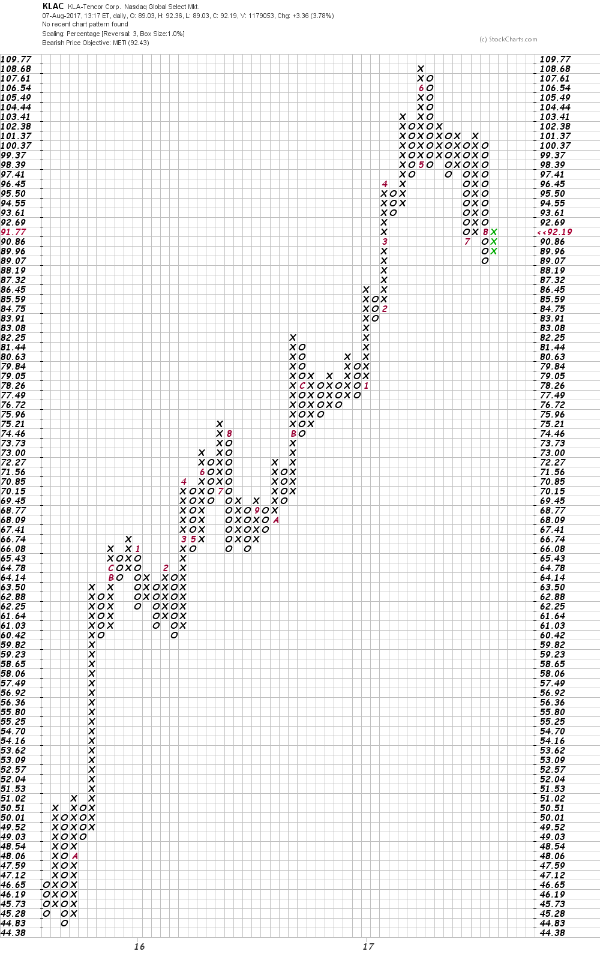 Bottom line -- KLAC made have put in a trade-able low but I would wait to buy the first down day and then use a sell stop at $88.25.

Get an email alert each time I write an article for Real Money. Click the "+Follow" next to my byline to this article.
TAGS: Stocks | Investing | U.S. Equity | Technology