The U.S. economy is growing faster than at any point over the past four years. We haven't seen this kind of expansion since a growth spurt spanned 2014's second and third quarters before fizzling out, making 2014 just one of the many years in what became nearly a decade of U.S. economic malaise. Can it be different this time? Will the U.S. economy actually hit the "breakaway velocity" that former Federal Reserve chiefs Ben Bernanke and Janet Yellen both spoke of, but consistently failed to deliver?

Well, the current pop in U.S. economic activity has come from fiscal stimulus rather than monetary stimulus, thanks to the Trump Administration's 2017 tax cuts and far-more-deregulated business environment. The tax plan in particular helped put a bid under stocks -- most notably through stock buybacks, as many firms suddenly had to figure out what to do with increased cash.

However, there are and will be lots of headwinds going forward. For example, the fiscal stimulus is a well that we can't go to repeatedly.

U.S. businesses' input costs are also rising, compressing margins. This is coming in the form of rising commodity costs despite a stronger U.S. dollar. The added pressure of a trade war (or trade wars) with our international partners also seems to be moving to what must be considered a medium-term condition, with the potential to become a long-term headwind.

The strengthening U.S. labor market has also reached down to all levels, allowing for extraordinarily low unemployment rates even among the least-educated Americans. We know from the Employment Cost Index that this is putting upward pressure on employee compensation, although more in the form of higher benefits than increased wages.

But while second-quarter earnings season isn't over yet, things look good so far. S&P 500 earnings have growth north of 23.5% year over year vs. expectations that were closer to 20%, while revenues are printing at around +9.5% against projections that were mostly below 9%.

The season's success has been led by the energy sector, as expected. The financials and information technology are also among the leading groups. This leads us to the trajectory of interest rates, and what that means to the markets.

It's quite easy to expect the Federal Reserve to remain on course for four 2018 rate hikes. After all, the futures markets are currently pricing in a 93% chance of a quarter-point increase at the Fed's Sept. 26 meeting and 68% odds of a hike at the central bank's Dec. 19 session.

Meanwhile, CEO Jamie Dimon of JPMorgan Chase (JPM) said over the weekend that the U.S.-10 year Treasury yield "should be 4% today, [and] you better be prepared to deal with rates of 5% or higher -- it's a higher probability than most people think."

Dimon is America's most-famous banker, and he's called for higher interest rates before. However, plenty of smart folks have different opinions.

For instance, Barron's had an interesting interview this weekend with Leon Cooperman and Steven Einhorn of Omega Advisors in which Einhorn said the 10-year yield "is likely to peak around 3.25%, which should bring a rather significant asset-allocation shift from fixed income to equities over time." Einhorn cited disinflationary forces such as deregulation, disruptive technologies and simple demographics for his belief that the 10-year yield is already flirting with resistance just about a quarter-point below his expected top.

How should we play all of this? Well, should Dimon be correct, then bank stocks will probably perform the best, while utilities, REITs and telecoms -- dividend-payers that are usually identified as bond proxies -- will suffer. After all, no one will clamor for a stock with a 3.6% dividend when the U.S. Treasury will pay you 5% for your money.

But with the 10-year note yielding 4% or more, the spread between the yield curve's short and long ends will expand and push net interest margins higher, making traditional banking a greater profit driver.

How to Play Higher Rates

Now, you might recall that I got longer on JPM, Citigroup (C) and Goldman Sachs (GS) in June ahead of what I expected would be a rally on positive Fed "stress tests."

That thesis didn't really work -- banks actually fell despite strong stress-test results. However, I added to all three positions at the lows, and then the group caught some wind in its proverbial sails and I made money.

Did you miss that trade? Is there anything you can do about it now? Well, let's check out JPM's chart: 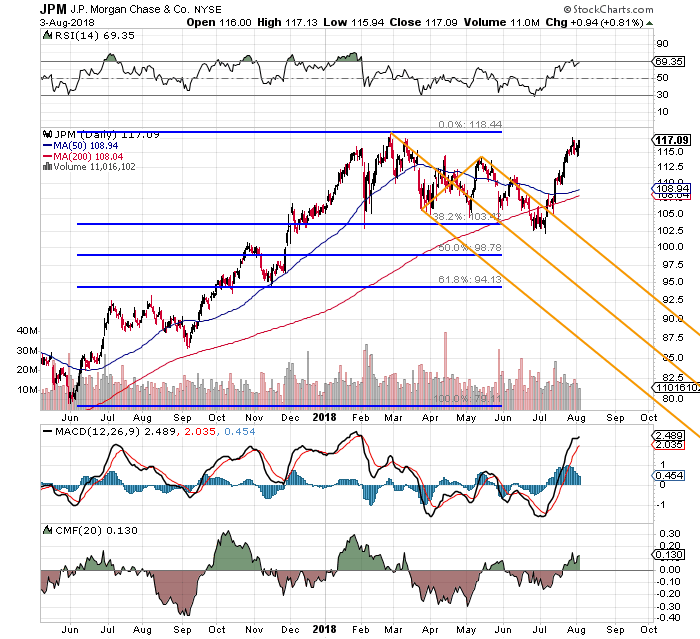 It's plain to see that JPM has been a real beast. Look first at the positive Chaikin Money Flow (marked "CMF(20)" above). You can also see a nearly overbought Relative Strength Indicator ("RSI(14)" above), as well as a daily Moving Average Convergence Divergence oscillator (marked "MACD") that seems almost perfect.

However, the stock is showing a shattered pitchfork pattern. All in all, the name has behaved according to its already-prescribed Fibonacci levels and currently sits right at resistance levels.

But fundamentally speaking, the shares currently trade at less than 12x forward earnings. JPM recently reported that revenues from consumer and community banking rose 53% in the second quarter, while commercial-banking revenues grew 21%. However, this was more due to a rise in economic activity rather than improved lending conditions.

Still, throw in a credit-card business that saw volumes rise 11% for the quarter and you're looking at a bevy of business lines that would flourish if we get a higher interest-rate environment. And let's not forget the firm's fortress-like balance sheet.

Add it all up and JPM looks good here. So, here are two ways to play the stock:

Trade No. 1: Sell a Series of Cascading Put Options

Best case: The stock goes higher and you pocket $274.

Worst case: The stock goes much lower by expiration. You'd be forced to buy 100 shares at each strike price less your aggregate premium. If disaster were to strike, you'd be long 300 shares at a $105 average price less a 91-cent-per-share average premium for a $104.09 net cost basis.

Best case: The shares rise in value (analysts' average price target is $122.17). You'd have a $116.10 net cost basis, and be committed to take a profit at $125 should the shares trade above that level at expiration.

Here are some other bank plays you could make if you expect higher Treasury yields: