(This commentary originally appeared on Friday on Real Money Pro. Click here to learn about this dynamic market information service for active traders.)

I received an interesting question from a reader regarding recent price action in the semiconductor sector.

Is it fair to say that the semis have topped? Is it all downhill from here?

This sector has been a solid performer for the past few years, so this question came as a bit of a surprise. However, upon closer examination, some individual semiconductor names look pretty shaky.

Let's begin our analysis with a chart of the benchmark PHLX Semiconductor Sector Index ($SOX).

While it's too soon to declare that this sector has topped, there are several warning signs on this chart. The most ominous of these signs is a double top (semicircles). This bearish pattern projects the index below 1000, close to its 200-day moving average (red).

The $SOX is trading beneath its 50-day moving average (blue). However, this isn't a major concern, as the index has quickly bounced back from several recent forays beneath that indicator (points A and B). 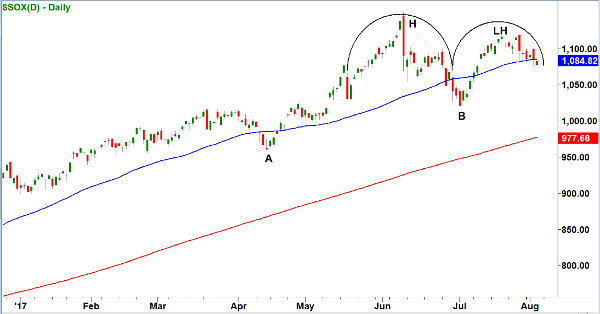 The $SOX has formed a lower high (LH), but it won't be in any serious trouble unless it also forms a lower low. However, some individual stocks within the index have already done this, and those names could be in dire straits.

One example would be chip equipment manufacturer KLA-Tencor Corp. (KLAC) , which has formed both a lower high (LH) and a lower low (LL). Yesterday, the stock closed beneath its 200-day moving average (red) for the first time this year. Due to the stock's persistent ascent in recent years, support levels are few and far between. The next support level for KLAC is $83, a former resistance level from late last year (dotted line). 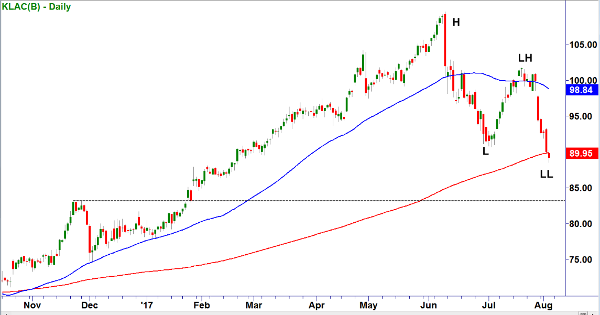 After reaching an all-time high less than two months ago (point A), Cirrus Logic (CRUS) also closed beneath its 200-day moving average (red) yesterday. The stock has been falling on heavy volume since the company reported earnings earlier this week. 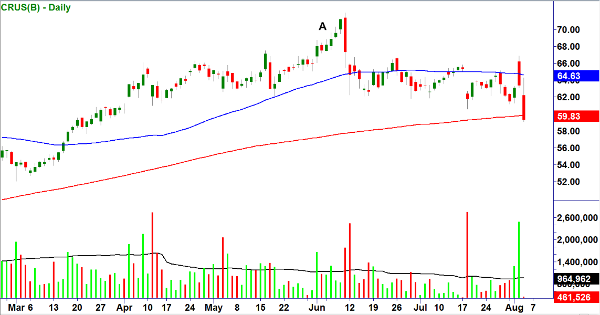 Unlike the above names, Xilinx Inc. (XLNX) has maintained its position above its key moving averages. However, the stock has formed a topping pattern, which could be described as a rounded top or a quadruple top. The path of least resistance for this name is lower. 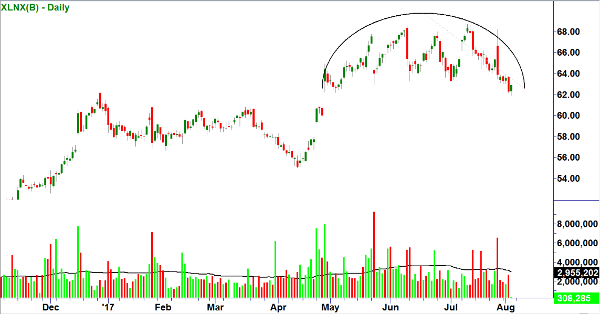 Bottom line: While the semiconductor sector isn't on the brink of collapse, it contains pockets of weakness. KLA-Tencor, Cirrus, and Xilinx have all shown solid gains over the past few years, and now all three appear ready to move lower, despite the current bull market. If you're long these names, it's time to take some chips off of the table.