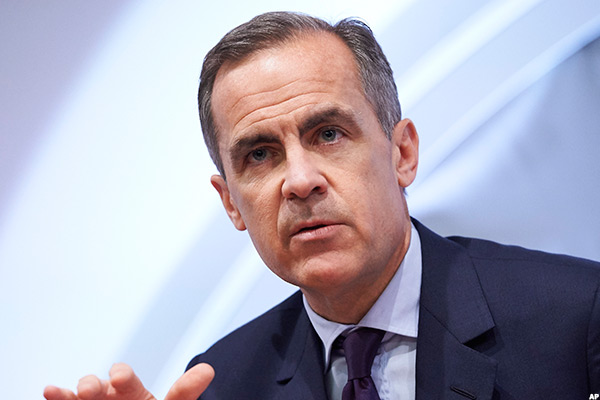 The Bank of England's reaction to the Brexit vote closely resembles the European Central Bank's bazooka, and in fact it is Governor Mark Carney's only way to attempt to close the widening gap between the U.K. and the eurozone. While the U.K.'s economy has struggled since the June 23 vote to leave the European Union, the single currency area has been surprisingly resilient.

The U.K.'s central bank cut its monetary policy interest rate for the first time in seven years, reducing it by a quarter of a percentage point to a new record low of 0.25%. This was widely expected; the surprise came from the much bigger than expected quantitative easing package.

The bank has expanded its purchases of government bonds by 60 billion pounds ($79.7 billion) and pledged to purchase an extra 10 billion pounds worth of corporate bonds. On top of that, the central bank is launching a Term Funding Scheme (TFS) under which it will lend money to banks at interest rates close to its monetary policy rate.

The monetary policy rate, or Bank Rate as it is known, is the rate of interest that the Bank of England pays on reserve balances held with it by financial institutions. Banks usually borrow funds from the markets at the LIBOR rate. The one-year LIBOR rate was above 1.4% earlier this week, so the funding provided under the TFS to banks will be considerably cheaper.

These measures are strikingly similar to those taken by the ECB, which is also purchasing government and corporate bonds (to the point where yields have been pushed into negative territory for many of these) and operates the Targeted Long-Term Refinancing Operations (TLTROs) under which it offers money to commercial banks at rates close to its deposit rate, which is a negative 0.4%.

Although the interest rate cut was widely priced in, the vigorous re-start of quantitative easing was not, and very few people had expected the BoE to start buying corporate bonds. (Click here for 13 stocks that could benefit from the interest rate cut). Corporate bonds denominated in pounds surged, while most European stocks and U.S. stock index futures rose after the decision.

Not everybody is happy, however. Savers will take another hit, corporations could see banks charging them for cash on deposit, while banks and insurers, already suffering under the burden of low interest rates, will have to watch their earnings fall even more.

The biggest test will come from the property market. After the Brexit vote, a number of commercial property funds were forced to suspend withdrawals as investors rushed for the exits, while residential transactions in the red-hot London market ground to a halt.

A property market crash would be catastrophic for the U.K. economy, therefore the Bank of England will do anything in its power to prevent it. However, with house prices at record highs vs. incomes, homes are becoming more and more unaffordable for first-time buyers, so structural reforms to raise incomes are also needed if home prices are to be sustainable over the longer term.

Corporate pension schemes, already in the doldrums because of years of low returns, are another sure victim of the new monetary easing measures. Nigel Green, CEO and founder of deVere Group, said there already is a "mammoth" 935 billion pounds ($1.23 trillion) "black hole" in companies' final salary pension schemes.

"With interest rates now at their lowest since 1694, gilt yields will fall further. These yields are already incredibly low and by falling even more, pension deficits will increase further ... The scale of these deficits casts doubt on the survival of many company pension schemes and in order to survive they will need to make drastic changes to the terms of employees' pension schemes," Green said in a statement.

However, perhaps the biggest problem is that the Bank of England's bazooka cannot solve the fundamental problem that the U.K. is facing: the current confidence crisis is caused by politics, not economics. The new government headed by Prime Minister Theresa May needs to come up with a reassuring post-Brexit strategy fast.

Get an email alert each time I write an article for Real Money. Click the "+Follow" next to my byline to this article.
TAGS: Fixed income | Investing | Rates and Bonds | Markets | Financial Services | Real Estate | Corporate Bonds | Economy | Politics | How-to | Stocks | Agriculture

Prudential Financial's Rally Is Running Out of Steam

Here's what could tip the scales downward.

3 High-Dividend Bank Stocks With Yields Above 4%

The surge of inflation this year has put numerous companies under pressure -- but banks are a bright spot. Here are three offering attractive yields.

Jefferies Gets a Friend With Deep Pockets. Should You Join In?

Warren Buffett's Berkshire Hathaway has a stake in Jefferies Financial Group, so what is a good place to but in?

Affirm Looks Weak Ahead of Earnings