Every once in a while, you see something that just blows you away. I vividly remember the first time I ever laid my eyes upon the Grand Canyon. Nothing quite like it. So vast. So beautiful. The first time that I ever set foot upon the trading floor of the New York Stock Exchange... as someone else's guest. The very first time that I ever saw my bride. A cold January morning, through a window. 1983. She wore a white polka-dot t-shirt, and black jeans. So pretty. Done.

Just last weekend, I was swimming in the Atlantic Ocean, not far from the shore, off at Robert Moses State Park on Long Island. It crossed my mind that there had been some recent shark attacks in the area, so I was a little more alert than usual. Then, what I saw made me doubt my own eyesight. Antlers sticking out of the water, rising with the ocean swells, disappearing into the troughs. A deer was out there swimming around, far too deep to be walking. I tried to keep my eyes on this oddity, but the creature swam out to sea, venturing much further than I was willing to go.

Upon returning to my home that day, I "Googled" the phrase "deer swimming out to sea" only to find out that deer do in fact swim in the ocean. I really thought that I had seen it all. I guess, you learn something new every day. Perhaps the ability to "Google" anything you like almost instantly has been mankind's greatest invention. Well, I mean, other than antibiotics and air conditioning of course.

One news item that has sort of meandered by rather quietly this week, was Alphabet's (GOOGL) development of a censorship-friendly version of the firm's search application. The firm once known, and the search engine still known, as Google left China back in 2010. At the time that, the company had made it clear that it was leaving due to the government's censorship, as well as what the firm felt was a cyber attack by hackers on its e-mail system.

Fast forward eight years, and Alphabet seems to be prepping for an environment that might just allow for such activity. U.S. Senator (R-Fla) Marco Rubio tweeted out that the news was "disturbing." We know that although the search engine itself no longer operates in China, Alphabet does indeed do business inside the nation. According to the Wall Street Journal, the firm still invests in developments along the lines of the cloud, as well as projects in the development of artificial intelligence, and still employs a rough 700 people on the mainland.

While this development might disturb people, it also I think illustrates corporate America's head-long race toward a trade war conclusion, despite China's rejection of Qualcomm's (QCOM) takeover bid for NXP Semiconductor (NXPI) , and despite the rhetoric around this situation politically. Does making an allowance for Chinese governmental policy get Google back in the door? How much would that hurt current Chinese search champion Baidu (BIDU) . If Alphabet's Google does successfully re-enter China, does that open the door for a broader corporate invasion? Thinking Netflix (NFLX) , and Baidu spin-off iQiyi (IQ) . Hmm. Currently, there is some kind of licensing deal between those two, but this would appear to be an immature market that Netflix does not have direct access to. The sticking point remains... one that would have to allow for unwelcome content control.

Tricks Of The Trade

By the way, I am long IQ. That name, since going public here in the U.S. back in late March, has been wildly volatile. You may recall that I gave you that stock as my secret weapon in my monthly June trading note. The stock peaked above $45 a share that month, while also trading just above $25. This is a name that I am often asked about by folks who are long the shares and know that I am too. Obviously, the stock is overvalued, even after the Goldman Sachs downgrade yesterday. Also obviously, the potential for this name is immense.

My feeling is that I will either sell this stock down the road for a lot more than it cost me, or the stock will hit zero. I really am not interested in the day-to-day moves made by this stock -- and for that reason, I have isolated that position from the rest of my book. Out of sight, out of mind. I don't want the gyrations of this one name impacting my thought process -- or my daily, or weekly, P/L ratio. Hence, and this is probably good advice for retail traders, create more than one account for yourself.

Each personal account should have a specific purpose. In fact, you should probably go as far as writing a mission statement for each single account. (I have eight, and that's down) Then simply forget to follow your "speculation" account as closely as you do the others. It is a simple move that will help clarify your mind, and purify your thoughts; as easy as placing a post-it note on your screen, over the P/L number on a lousy day. Tricks of the trade, gang. Your game, your rules.

As much as the headline print for nonfarm payrolls, and the year-over-year number for average hourly earnings, the participation rate will be in focus today as Fed watchers and traders alike wait upon the BLS data on July's employment situation. Participation has never truly recovered, and has dwindled from the depths of the "great recession" until this day. This remains a drag on productivity, and a key reason why wage growth has remained stubbornly low.

The low participation rate has also been a main reason why the labor market in reality experienced a lot more slack than our central bankers could understand as the economy worked its way back from the abyss. This is also precisely why the Phillips Curve failed to work the way it does in the text books. As of June, participation stood at 62.9%, up from 62.7% in May, but below the 2018 high of 63% (February). Participation has not printed above 63% since March of 2014. To put it all in perspective, in 2008, the norm was around 66%. The all-time highs for the series came in the 1990s, when for roughly three years, participation stayed above 67%.

Do we ever get back to numbers like that? Probably not. Can we go considerably higher than 62.9%? I think so. Our most recent JOLTS report claimed that there were 6.84 million job openings in the U.S.. The June BLS report only claims 6.56 million unemployed. I think we all know that the real number is higher than that, but the progress is undeniable. The expectation for today is for a slight drop in participation that ironically leads to a simultaneous drop in the unemployment rate. Thus, we see the ineffectiveness of the unemployment rate as a useful tool for measuring success of failure for the national labor market.

One of the worst names this year in the Consumer Discretionary space has been L Brands (LB) . Gross. Earnings have been sloppy. The firm guided lower for the full year back in February. In May, they guided lower for fiscal 2019 as well. Debt-to-capital has crept higher as cash levels have gone lower. Profit margins have gone the wrong way, as well. Oh, the Current Ratio looks okay, but this is a retailer, a mall-based retailer. Strip out inventories and the Quick Ratio... not so hot. In mid-July, the firm flat out told us that they had a lousy June.

One thing has not changed. Every quarter, these guys still pay their shareholders $0.60 per share. The dividend yield is now up to 7.5%. Is it safe? As long as free cash flow is there, and it seems to be, I think for management, the dividend will be a line in the sand. You have time... I think. 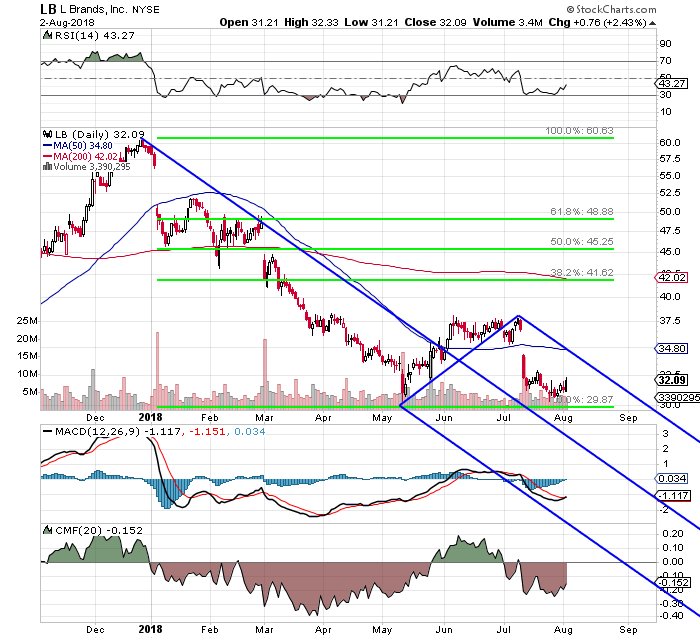 The eye is immediately drawn to Money Flow, which is awful. However, the daily MACD, and Relative Strength both show signs of recovery, as the name appears to have formed a double bottom. The Pitchfork might scare the stuffing out of you, but a Fibonacci model created with the same late-2017 start date actually offers some hope. Do I want to invest in L Brands? Not with the rent money. Is the name worthy of the mentioned above "spec book"? Perhaps. Especially if they leave that dividend alone.

The stock reports after the closing bell on Wednesday, August 22. They'll probably declare the dividend within ten days or so. you know that I like to sell puts, but you need equity in order to get paid by the firm. What I am thinking of doing is called a "buy-write." For our new traders, all that mean is that the trader buys an equity stake, and simultaneously sells (writes) covered calls against the position, thus reducing net basis costs. Profit is then obviously limited, but then again, the trader will have technically bought the shares "below the market."

Get an email alert each time I write an article for Real Money. Click the "+Follow" next to my byline to this article.
TAGS: Investing | Global Equity | Technology | Economic Data | Earnings | Consumer | Economy | Newsletter | Politics