Heineken NV (HEINY) is making news today with a Chinese tie-up but I am more focused on the charts and indicators of this global brand. HEINY has been trading sideways the past 12 months but that is just a pause in a much longer uptrend. Let's put a 24-pack in the frig (hey, the weekend is almost here) and check out the charts to find some green signals.

In the daily bar chart of HEINY, below, we can see that prices have moved largely sideways the past year. Nimble traders may have been able to scalp some trades from the long side but position traders would probably have been frustrated with the up and down moves. HEINY has crossed above and below the 50-day moving average line and the longer-term 200-day moving average line has turned flat the past three months.

The trading volume here in the U.S. has been erratic or spotty but the On-Balance-Volume (OBV) line tells a very bullish story. The OBV line has been moving up sharply from December suggesting that buyers of HEINY have been more aggressive for months. The Moving Average Convergence Divergence (MACD) oscillator has moved sideways all year.

In this weekly chart of HEINY, below, we can see the highs and lows of the past three years. From early 2017 a tradeable rally can be seen with prices above the rising 40-week moving average line. Over the past six months prices have crossed above and below the 40-week line and now this indicator is turning up again.

The weekly OBV line shows a long decline which does not line up with the daily OBV line which has been bullish. The weekly MACD oscillator is turning up again to a buy signal after a long correction.

While the daily bar chart shows a sideways trend the past year, this longer-term weekly chart of HEINY going back to 2009 tells us that the major trend is up.

In this Point and Figure chart of HEINY, below, we can see the sideways price action of the bar chart compressed into a tight consolidation. An upside price target of $64.56 is being projected or new all-time highs. 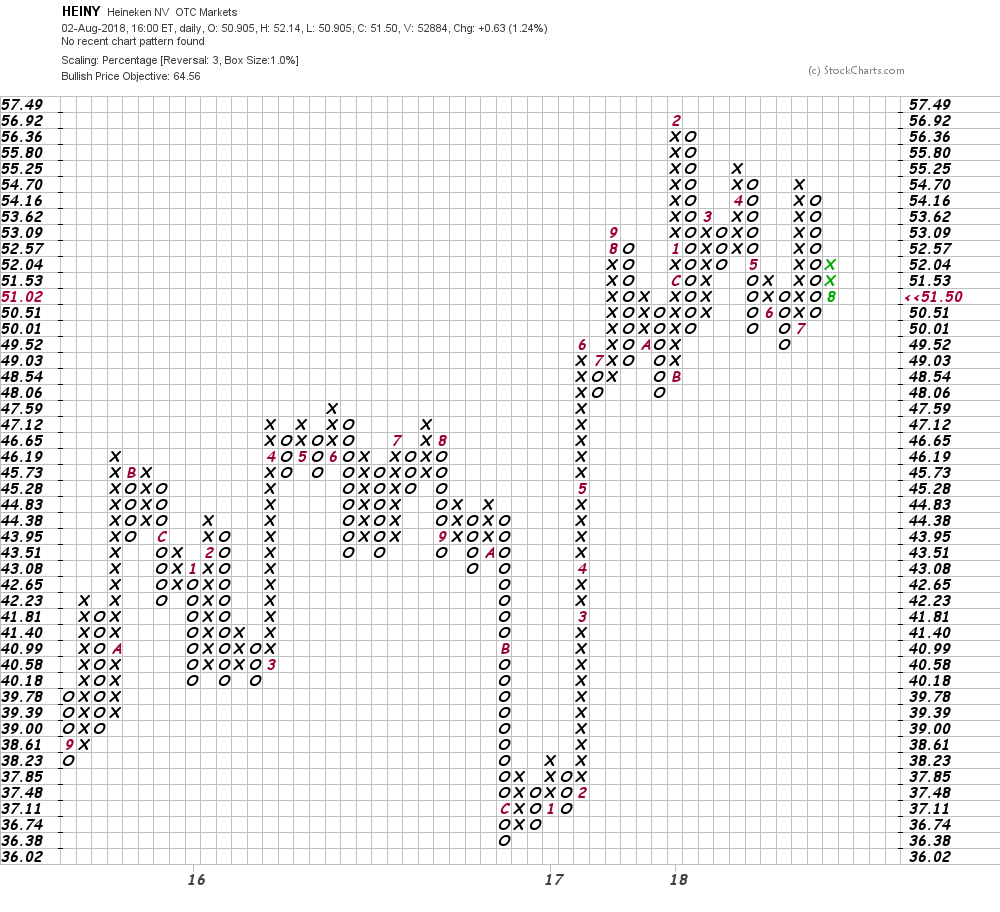 Bottom line: If you have vacationed in the Caribbean you probably tucked into a brightly colored beach bar and saw a blackboard menu that included a bucket of Heinekens. That is one way to go long. Another way to go long is to buy HEINY around current levels and on strength above $55. The $65 area is our first upside price objective. Risk below $48.

The whole group has run and the guidance from Clorox does show, more than anything, that nobody knows.

2 Factors That Have Procter & Gamble Poised for New Heights

This is one big name that appears to be in the sweet spot at the moment.

This Coke Trade Is the Real Thing

I like KO, especially as the value vs. tech trade plays out.