Eli Lilly and Co. (LLY) is another stock that has soared higher recently as Jim Cramer points out today on Real Money. The weekly breakout over $90 is pretty impressive on the charts, so let's take a look.

In this daily bar chart of LLY, below, we can see how LLY was unable to overcome the chart resistance in the $88-$90 area. Rallies failed in October, December, late January, June and early July. In the second half of July LLY surged past $90 and has not looked back.

The volume histogram right below the price chart is hard to fit together with the price action - the volume is heavy into the January-February decline and actually lighter in late July when prices break out on the upside. Unsettling to traditional chart watchers.

The daily On-Balance-Volume (OBV) line shows a bullish rise from February and new highs recently to confirm the price action.

The Moving Average Convergence Divergence (MACD) oscillator turned up above the zero line in late April for an outright go long signal which is still in place.

In this weekly bar chart of LLY, below, we can see the recent upside breakout. For the past three years LLY was unable to move above $90. Now LLY is in new high ground above the rising 40-week moving average line.

The weekly OBV line has moved up to a slight new high and the weekly MACD oscillator is clearly bullish.

In this Point and Figure chart of LLY, below, we can see a breakout trade at $88 in the beginning of July (look for the "7" on the chart). Prices have reached the $96 price target but I would not rule out further strength. 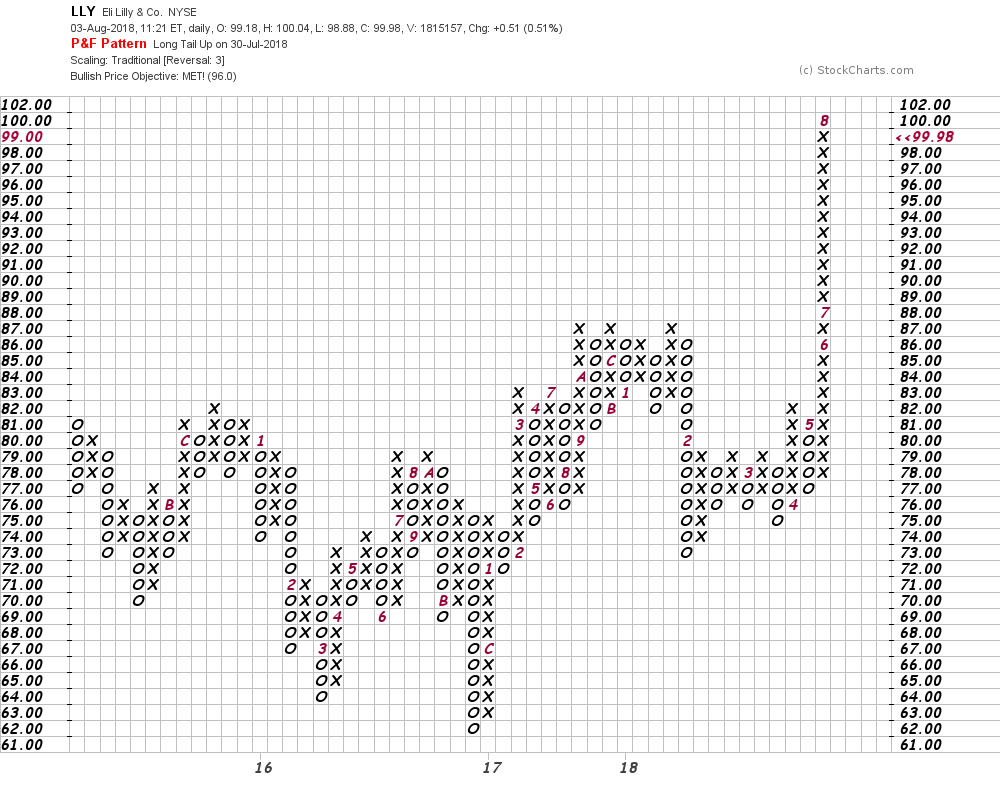 Bottom line: LLY has made an important upside breakout from a large sideways consolidation pattern. Longs should hold for gains to $110 and perhaps higher. Risk below $92.