Looking for a chart/stock that hasn't doubled or tripled in the past year but has a nice-looking broad base pattern? Sure, we would all love to find that. Take a look at CF Industries Holdings Inc. (CF) , as I think it fills the bill.

In this daily bar chart of CF, below, we can see two trends over the past 12 months. First, there is a rally from August to January followed by a correction from February to early June. It looks like CF is shifting trends again since early June, and this could be a good location to probe the long side.

CF has been trading above the rising 50-day moving average line for the past month while it trades above and below the rising 200-day average. The 50-day line is not that far below the 200-day line, so we could see a bullish golden cross of these averages in the days or weeks ahead. The On-Balance-Volume (OBV) line is flat/neutral on this daily time frame but bullish on the weekly chart. From March to April to June you can see the higher momentum readings in the lower panel of this chart. Comparing the momentum movement to the price declines from March gives us a bullish divergence and another reason to be positive on CF.

In this weekly chart of CF, below, we can see how prices have traded sideways since early 2016, forming what I believe is a long-term base formation. In recent months CF has traded around the rising 40-week moving average line, and a close above it will not need much of a rally. The weekly OBV line has been rising the past four months, telling us that on this time frame buyers of CF have been more aggressive. The weekly MACD oscillator is just slightly below the zero line, but it is signaling a cover-shorts buy signal.

In this Point and Figure chart of CF, below, we can see the base formation unfolding. A rally to $32.32 will open the way for an advance to the $37-$38 area, but a trade at $38.38 will allow for more bullish price targets. 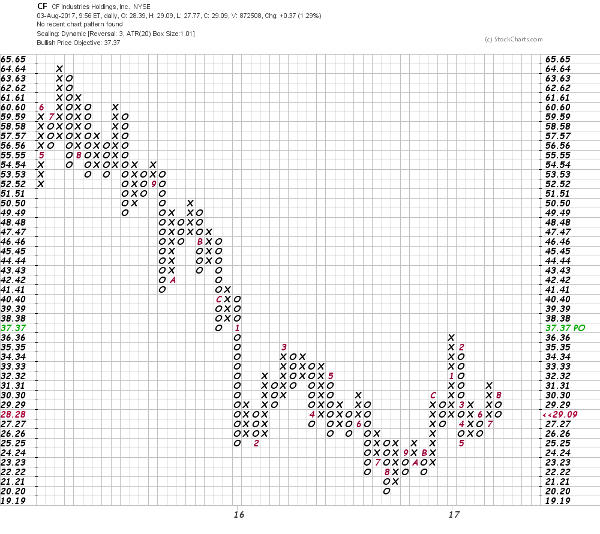 Get an email alert each time I write an article for Real Money. Click the "+Follow" next to my byline to this article.
TAGS: Investing | U.S. Equity | Basic Materials | Consumer Staples | How-to | Risk Management | Stocks