Any time a large Berkshire Hathaway (BRK.B) holding gets hit hard, it's worth re-evaluating. When it's a stock that Berkshire holds almost 20% of, they must have strong conviction in the firm's long-term prospects.

Shares of kidney dialysis provider DaVita Healthcare (DVA) took a major header on Wednesday after reporting second-quarter EPS that were 2 cents better than estimated, but lower year over year. As of 11:10 a.m. ET, the stock was off by 7.72% on the day, at $59.18, and down more than 23% from its 52-week high of $76.97.

Warren Buffett has a lot of patience. As of Wednesday, both DVA's earnings and share price were very similar to where they sat four full years ago. That's not great on a non-dividend-paying stock.

Wednesday's selloff brought DaVita back to slightly below its long-term average multiple of 17.3x. That's based on this year's somewhat disappointing projection. The shares fetch just 15.5 times the 2018 consensus estimate. 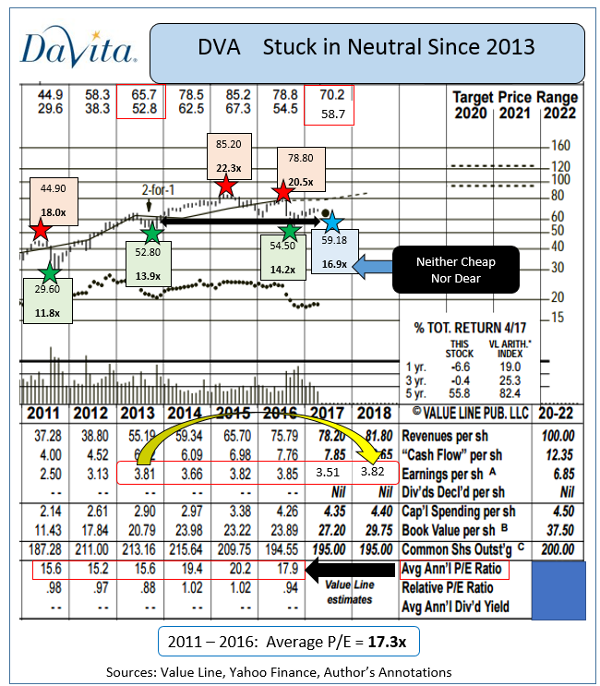 I'm not quite ready to buy DVA shares outright. I did take advantage of this week's plunge to sell some Jan. 18, 2019, expiration date puts at strikes ranging from $55 to $60.

Owning DVA at levels that low does not seem daunting at all. In fact, those entry points appear quite appealing. 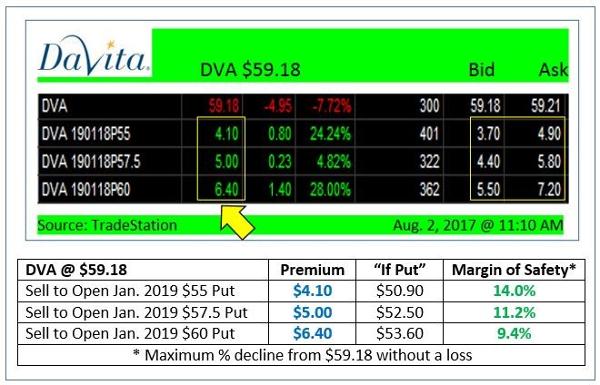 Future stock price action can never be known in advance. I can say for sure, though, that holders of DVA at under $54 were in the black 100% of the time since before the start of 2014. 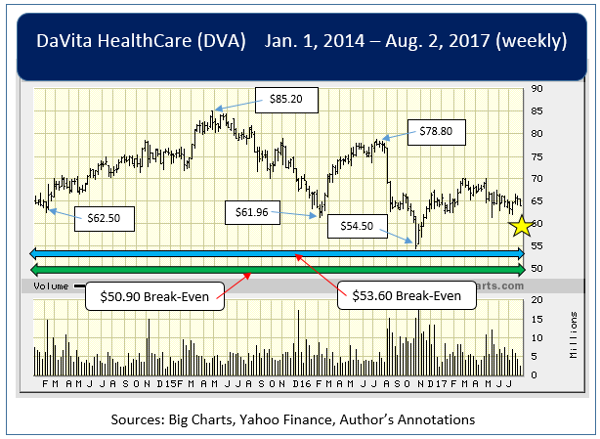 Dialysis is an inelastic demand service. If you need it, you will get it or literally die trying.

Demographics suggest volume will rise over time as America ages. I suspect that's the reason Berkshire Hathaway maintains such a large stake.

Fundamentals suggest DVA is cheap enough to be near a bottom. Technicians should like that support kicked in firmly around $54 to $55 just prior to last fall's election. Management bought back 3.6 million shares during the second quarter at an average price of $64.44.

DaVita seems ripe for at least a small bounce.

Play that possibility by writing some DVA puts out to January 2018 or January 2019.

This commentary originally appeared on Real Money Pro at 7:00 a.m. on Aug. 3. Click here to learn about this dynamic market information service for active traders.

Get an email alert each time I write an article for Real Money. Click the "+Follow" next to my byline to this article.
TAGS: Investing | U.S. Equity | Healthcare | Stocks | How-to | Options