Agilent Technologies (A) has been in a strong uptrend since early December. Prices have made a high-level consolidation pattern the past two months, which should be able to support further gains as fall approaches.

Let's check our typical list of charts and indicators to see how things are shaping up.

Prices turned up, and so did the On-Balance-Volume (OBV) line. A rising OBV line happens when there is more volume of shares traded when the stock closes higher. Buying more on an "up day" is shows that traders and investors are being more aggressive. The OBV line has leveled off the past two months, as prices have traded sideways around the $60 level.

The trend-following Moving Average Convergence Divergence (MACD) oscillator has corrected down towards the zero line, but looks like it could narrow to a bullish crossover.

In this weekly bar chart of A going back three years, above, we can see that prices are above the rising 40-week moving average line. The weekly OBV line is positive, as it has been since early 2016. The weekly MACD oscillator looks like it could generate a take-profits sell signal, but that may be negated if prices rally to new highs. 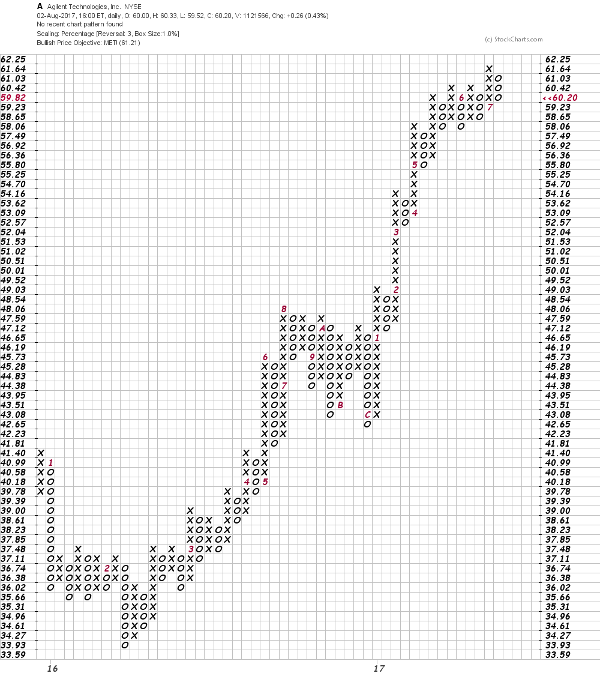 In this Point and Figure chart, above, we can see the strong rally since early 2016. There is a good-sized consolidation pattern in the second half of 2016, and prices have been consolidating since late May. Prices have reached a target, but a trade up at $62.25 would be a fresh breakout on this chart.

Bottom line: a close below $58 would weaken the daily chart of A, and a trade up at $62.25 would be a breakout. Aggressive traders could do some buying here and more above $62.25, risking a close below $58.

Get an email alert each time I write an article for Real Money. Click the "+Follow" next to my byline to this article.
TAGS: Investing | U.S. Equity | Healthcare | Markets